Well, unless you have been hibernating I am pretty sure you will have heard about the horrible flooding we have had in Cumbria this last week, and in my home City of Carlisle.

In 2005 we were hit with a massive shock when we got up one Sunday morning to find the City had flooded.  And I mean, THE CITY.... the Police Station, The Fire Station, Debenhams, the Civic Centre, leisure centres, restaurants, petrol stations, public houses, factories, supermarkets and of course homes.  Lots of homes.

Luckily, we live on a hill.  I had a puddle in my garden, that was it.

We were stranded at that point, one of my sons was at my parents house on a sleepover, so I didn't see him for three days as there was a lake of water between their house and mine.  Using the motorway was an option, going from one end of the City to another, to sit in queues and queues of traffic just to get a couple of miles.  We also had no electric, no mobile phone signal, no heating, no landlines.  We all sat in our houses for 2-3 days, stunned by what had happened, no-one quite sure what to do.

I remember last time my sister got stuck on her estate, having abandoned her car somewhere she throught was safe, she waded home, through a burst river.  Sounds stupid now, I know, but people didn't really know what to do back then.  We had no contact for a day, then the mobile signals started to work again. She was still stranded 3 days later when our electric came back on and we could get online to see what was going on.  I went onto the BBC website and found a photo of where she had left her car. I called her.....


I bought the souvenir book... it feels so wrong to call it a souvenir book, a souvenir is something you buy after you have had a nice day out, or a holiday you wish to remember, not some tragedy.  Anyway, I thought that my children, who were 11, 13 and 14 then, would not really appreciate the enormity of the floods, and how much it affected their City, how awful it all was seeing iconic Cumbrian buildings knee deep in water. I was pretty sure they would never see it again in their lifetime. 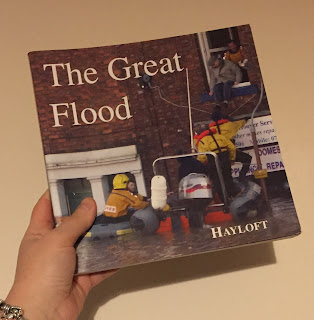 How wrong was I?   Only 11 years later and it happens again.  Not just that, but happens bigger.  The water was higher, it reached streets that had been unaffected the previous time.   In the years in-between there had been flood barriers built - big ones, all over the place, the water still breached.  At least we went to bed this time expecting to get up and see it all happen again.  At least people were not blind to the fact that this was happening so could move belongings up stairs, at least this time they could move their cars to higher grounds.  At least the power engineers could make a start and try to avoid the big power outages we had last time. At least.....  Sad to say a lot of people were now facing their 2nd time of getting their houses totally dried out, gutted and re-plastered.  New kitchens, new living rooms, new bedrooms (as one area was 'bedsit' land), new cars, new gardens.... and to top it all off a good long stay in alternative accommodation! 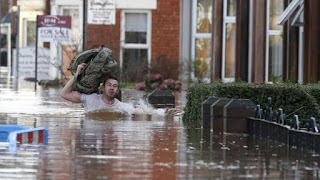 But still, the Prime Minister visited, which was good of him.  He didn't read his auto-cue properly so got his little speech wrong, and he looked very odd in his North Face jacket.... I don't think he did any mucking out though, that would have been good to see, him bringing his suited colleagues, with wellies and bin-bags.  (We got Prince Charles last time, he didn't muck out either) 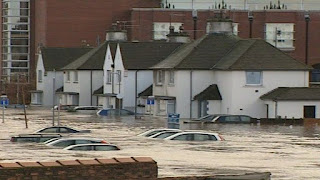 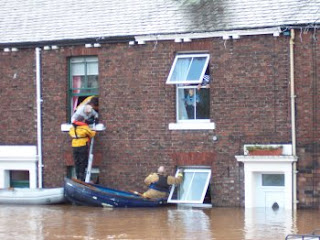 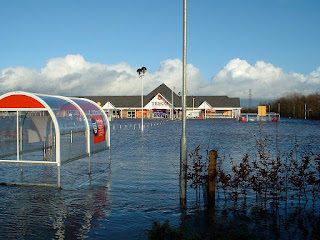 There are marked differences this time, we have a bypass , which has made getting around a bit easier.  A four minute journey to work suddenly turned into a 37 minute journey due to the fact that there was no traffic moving through the City at all.  But, shouldn't grumble, at least we could move about.

We have Facebook and Twitter, and due to the fabulous work of many many organisations, we had very little power outage - unless you were one of the unfortunately flooded of course - so could keep an up to date check on what was occurring in real time.

The community rallied, with donations of clothing, food, support and more.  Businesses jumped in with massive donations, pizza making vans making free pizzas for the workers, coffee vans pouring endless cups to keep people warm.  Carlisle United footballers came out to help move debris.  Then there was the negative ones that put prices up, cashed in on people's misfortune - those ones that shall be boycotted from here on in.

Thanks to Facebook I was able to put a 'shout out' on my Facebook business page to see if anyone had a boat to go and rescue my sisters partner, who was upstairs in his daughter's house (having gone to help move things) and was stuck, along with his daughter and 3yr old granddaughter.   The kitchen was underwater, which meant no food, no clean water - the river had burst and came in that quick that it just happened.  They were rescued by a lifeboat.  I wonder if the little one will remember, maybe we should buy her a book...

Now the water has gone, the streets are tinged brown with the mud and silt left behind and the pavements are piled high with sofas, carpets, furniture.   Soon the debris will be gone.   The memories, I fear, will always be there. 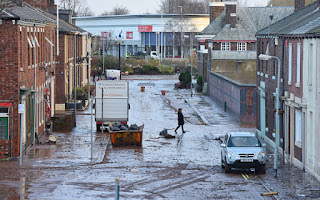 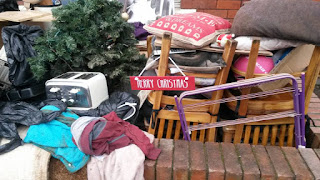 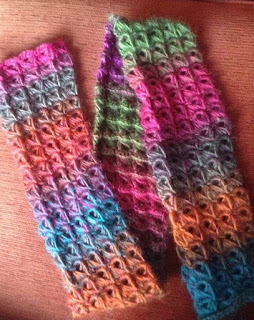 Broomstick crochet looks very impressive, but it may seem a little scary.  It's not!  There are only two rows to learn, and one of them you will already know if you crochet.

Instructions are given in two sizes, regular adult and teen size in brackets.


I used James C Brett Monsoon yarn, which is an Aran Weight, and a 4.5mm hook.


Row 1. DC (Double Crochet) into the 2nd chain from the hook and all the chains following. (25 stitches)

Row 2. The loop you have on your crochet hook, pull it large and pop it over the dowel rod.

You may wish to wrap the elastic band around the end of the dowel to prevent lost stitches. 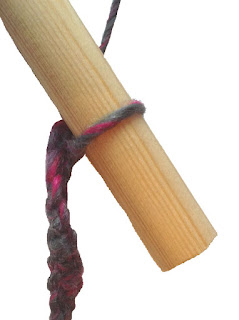 Now working in a manner that will be odd to the regular crocheter, you will be working back across the chain stitch, from left to right.
*** Put your hook through the next stitch, bring the yarn through, pull the loop large and slide it onto the dowel. 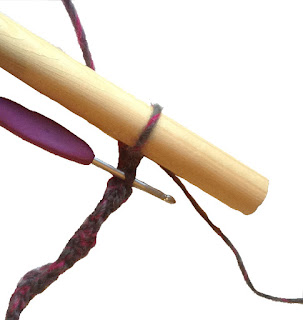 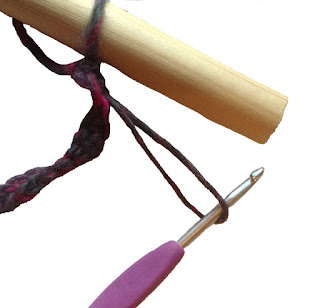 You now have two stitches on the dowel. 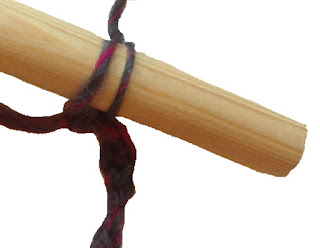 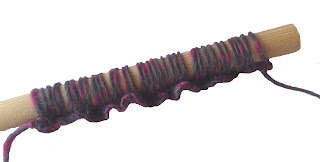 Row 3.  Slide your crochet hook into the first FIVE loops, making sure it is at the TOP of the dowel, opposite the DC row. 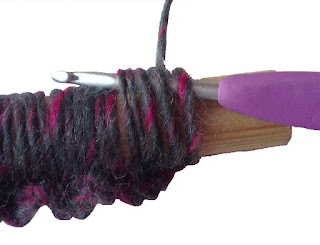 Pull your yarn through these five stitches and make a chain stitch  (this is your turning chain and is used at the beginning of every row, just like this.) 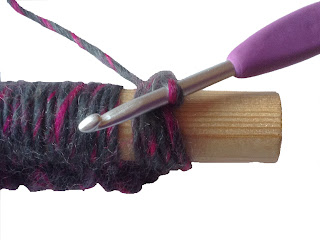 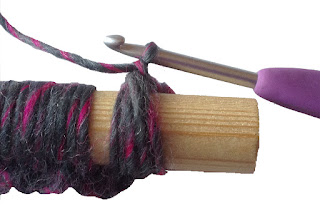 Now for the really scary bit!
Slide all of your stitches off the dowel, don't worry, they won't go anywhere as you have knotted your first one in place.

With your fingers, fiddle with those first FIVE loops that you made a stitch into, until you can see the hole running through them all.
Then make 5 DC's into that hole. 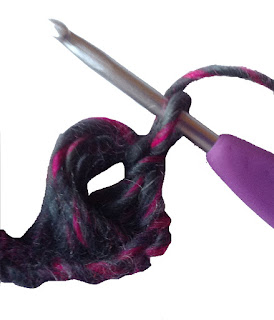 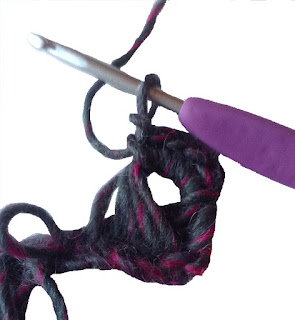 Now pick up the next five loops and make 5 DC's into them as you have just done, but no chain stitch this time, that is only ever in the first one. 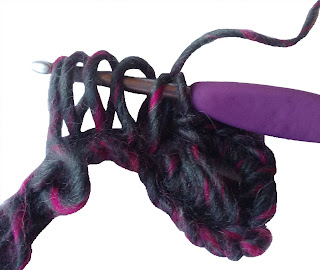 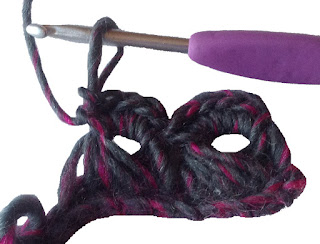 Work across, working 5 DC's into each set of 5 loops.

Row 4.  The last loop you have on your crochet hook - pull it up and place it on your dowel.
For each DC you will pull through a new loop as in Row 2.  .  You should count 5 loops for each set of 5 DC's. 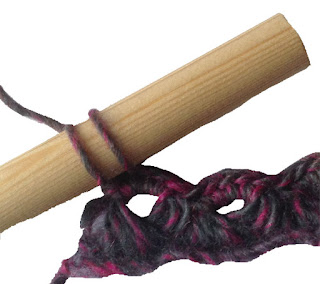 And basically, that is the pattern!
Repeat Rows 3 & 4 until your yarn runs out! 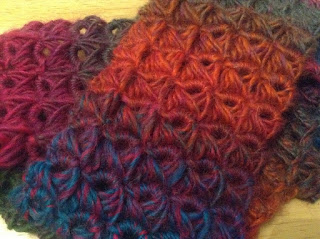 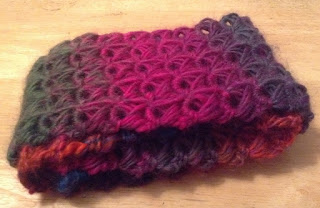 A wee while ago I picked up some 100% Yorkshire wool, part of the W.I range at Hobbycraft.  The idea was to make one of my Robin Baubles that I designed last year, but instead of a Styrofoam ball in the middle, it would just be stuffing, then I would wash and felt the wool to make a super-cute robin. 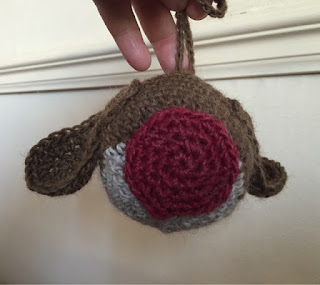 So, Robin made, I asked Hubster to "chuck it in the wash" with his darks.  He did.   A few hours later he came sheepishly up the stairs with my felted Robin and said "I am so sorry, I think I ruined it".

I could have made him suffer I suppose, but it did exactly what I wanted it to do, it felted and shrunk perfectly. 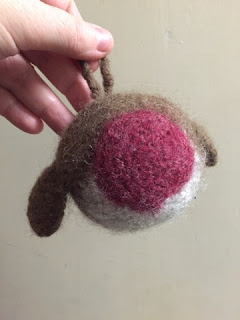 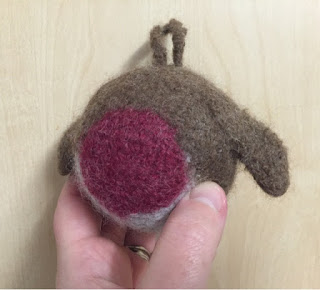 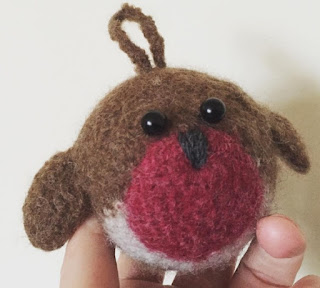 With the addition of eyes and a beak, he was complete, and very cute, even if I do say so myself.

If you would like the pattern and instructions, you can find them HERE :
Posted by Unknown at 17:13 No comments: