The local Hospice in Carlisle is called The Eden Valley Hospice, and they have decided to try and break the world record attempt for Pom Pom making!

It's no mean feat, believe me.  I seem to recollect being told the target was something around 8,000 Pom Poms - although that is still to be confirmed.

Anyway, you have to start somewhere, and to help out a tiny (and I mean, tiny) bit, and to help promote the idea in the hope that people might make Pom Poms in the comfort of their own homes and donate them to the cause, I put a little 'get together' on.  Biscuits, brews and pom poms was the game of the day  :) 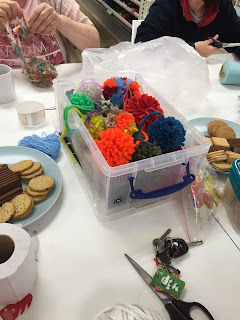 It was in Hobbycraft, Carlisle, on a busy Saturday afternoon.  We grabbed shoppers and browsers, and talked them into making Pom Poms with us. 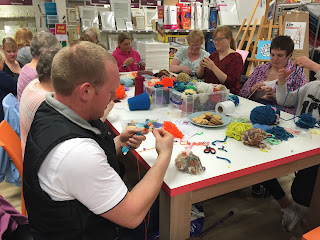 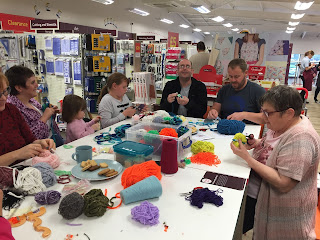 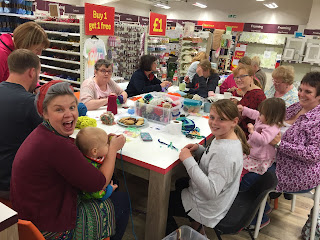 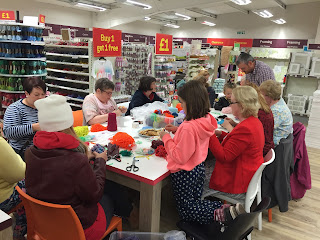 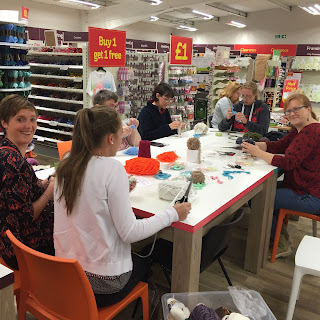 At the end of the day we had 86 marvellous, cheerfully coloured, balls of wound and cut yarn. 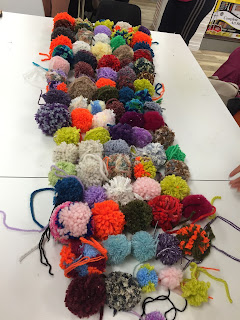 Thank you SO much for coming, if you did, and thank you for allowing us to disturb your shopping, if you did.  Suzanne took the Pom Pom's away with her to The Eden Valley Hospice. 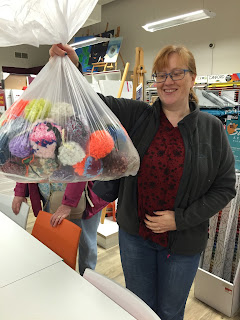 A start at least.  Can YOU help?  If so, make some Pom Poms and drop them into Hobbycraft  (the Carlisle store only) or email me on soozintheshed@gmail.com and I can tell you where you can post them to.

I will be doing another of these events to boost the collection.  It is totally free to attend, all we want you to do is make a Pom Pom or two for us.  All yarn is provided, although donations of left over yarn is greatly accepted.

Keep an eye on my Facebook page for event notices.
Posted by Unknown at 19:30