I recall, many years ago, at Guide Camp, shoving crisp bags on the end of a stick into the camp fire, and turning them until they melted and shrunk right down.  We then used to glue a pin on them and use them as a brooch.  Sadly, the crisp packets these days are made from a different material - foil lined to keep the crisps fresh - and therefore do not melt.  But it was such fun, do you remember?

Well the modern day product seems to be Shrink Plastic (available in different brand names)  I wonder if the inventor of this also used to shrink down crisp packets.

I have been eyeing up the "Shrinkles" in Hobbycraft for a while now, but when I also spotted a Marabou stencil for a Stacking Doll type figure and idea formed.... 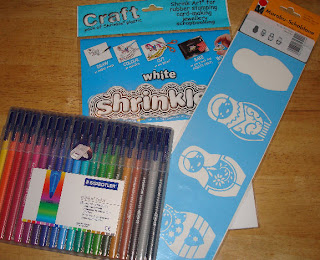 I made a small purchase  :)  (the pens were already mine, I just had to search around the house and re-discover them, strangely under Shona's bed!!)

I made a start and very quickly worked out that normal felt tipped pens bleed, they looked ultra messy and frankly as if a 3yr old had coloured them in.  In fact a 3yr old might have made a better job! 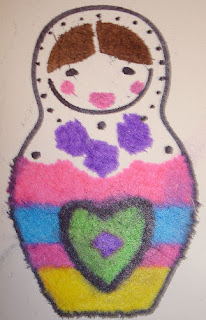 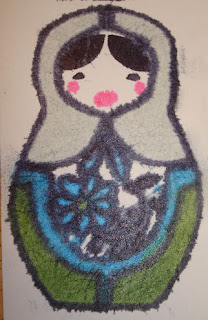 So then I dug some pencils out and had another go, I scribbled and scribbled to try and strengthen the colour as it was very pale, but to no avail (remember this bit, I will refer back to it later).

Ok, so I'm watching this project slide uncontrollably down hill, but instead of throwing them in the bin in utter disgust I thought I would see it out to the end and bake them. 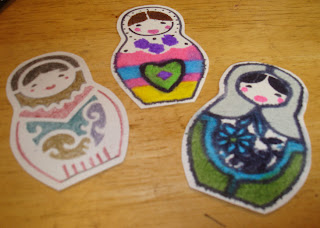 But before they do I hole punched their heads so I can hang them from something. 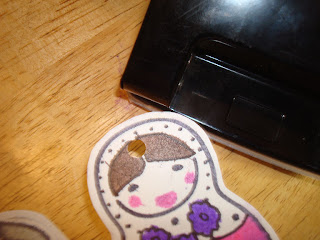 The instructions say, Gas mark 3 for a "few minutes".  I take that to mean, 3 or 4 minutes, perhaps 5.  So I sit on the cold tiled kitchen floor and watch them through the oven door.  25 minutes later I decide to go and watch something on TV in the living room and allow my bum to warm back up.  At this stage I had watched them curl right up almost into little balls, then just wobble about with a big bubble in the centre.  I had to wait until they were totally flat before removing them from the oven.  My oven isn't a great oven anyway, I never use timings or heat instructions I just shove stuff in and take it out when it looks/feels cooked.  A throwback from using an old Aga when I was 17 and working in a hotel kitchen.

Eventually they make an appearance back into the real world, nice and flat.

Before and after cooking. 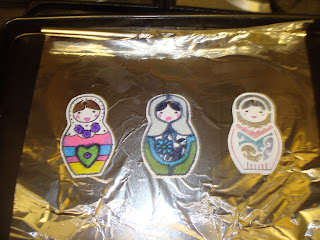 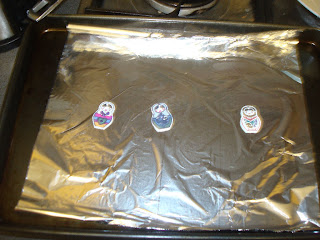 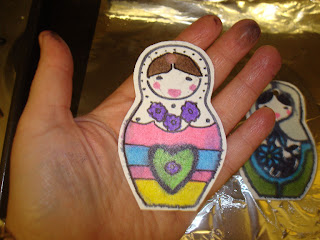 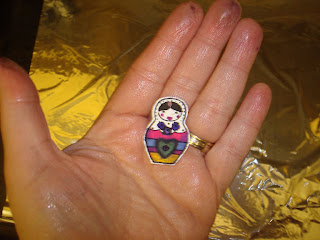 The colours are still horribly smudged on the felt tipped pen attempts. 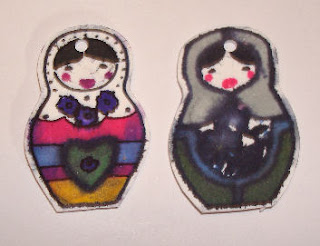 But the pencil one surprised me, the colours had intensified a lot, were nice and crisp with neat edges.  Alas though, all that scribbling to make the colours brighter had resulted in lots of pencil dust which also intensified when cooked. 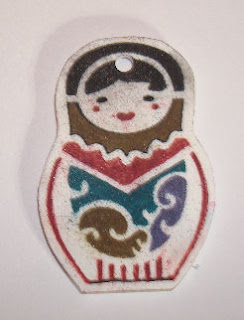 Lessons learnt I think..... off to try some Sharpies, see it they work any better.

ps: The Amazon links I've scattered throughout the page are affiliated  if you click and buy I might get a few pennies.   I'll never be rich, but every little helps ;)