Last week I had a bag making session with Marie from Nim & Num.  The night before, when I was confirming that she was still coming, she answered with "Yes, Stuart is already waiting by the door"

Well, it turns out that Stuart is her sewing machine.  I suppose being a Brother machine he needed a boy's name, so Stuart it became.

I got my sewing machine out - a Singer - and looked at her sadly (because I think it is a her) as she was unnamed.  Aww poor little sewing machine whose owner doesn't love her enough to give her a name.

Over the last couple of days I have been thinking about a nice name for my sewing machine - yeah, honestly, I really have nothing better to do.  The name that keeps popping in my head is Sally.

I keep pushing it back out again as I have a couple of friends called Sally so I really can't name my sewing machine that, can I?

But the name won't go away, so I think I will have to give in and give it to her. 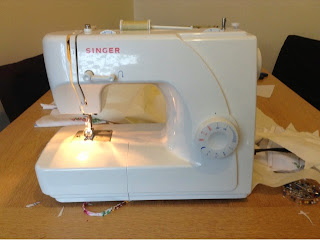 The "creative director" of Vogue magazine is called Sally Singer, so Google tells me.


Do you name your machines/gadgets/etc....?