Finally finished the project I ran out of yarn for. 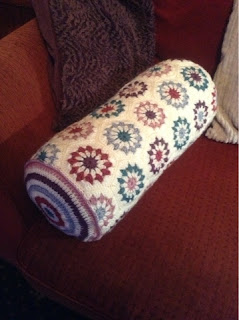 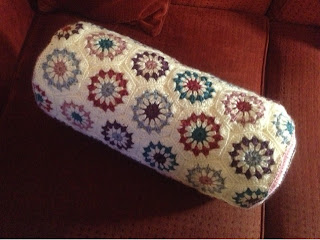 I bought this bolster cushion in Dunelm Mill a wee while ago when I went into buy the round pad for my Blossom cushion, for some reason I couldn't resist it!

I picked up some yarn and a hook, and with no real idea of what I wanted to do, just started to crochet.

I decided to do Granny Hexagons, makes a difference from squares. I did a starburst effect where you hook in between the stitches rather than into the actual stitch itself, I like the pattern this gives. 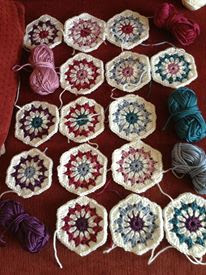 Then I sewed them together, trying to make sure that the colours were not touching (there's no such thing as 'random' you know :) )

Actually, I didn't really sew them together, I hooked them together using a slip stitch into the outer loops only, which made the edges stand out and look like actual patchwork. 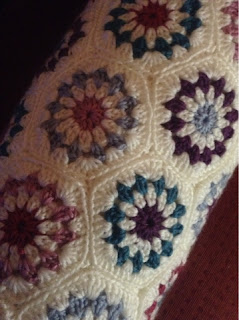 Of course, before I could finish I ran out of yarn & had to ask a friend for help.

Once I had enough to wrap around the bolster cushion I realised I would need to fill in the edge gaps as they were missing half a hexagon (is there a mathematical name for half a hexagon?). I decided the only thing that would suffice was ...... half a hexagon! But how?

It took me four attempts to get the numbers right, as the hexagons were worked in rounds, but the half hex had to be worked in rows, but I got there in the end.

For the ends I just made a round using all the colours and sewed (hooked) it into place. 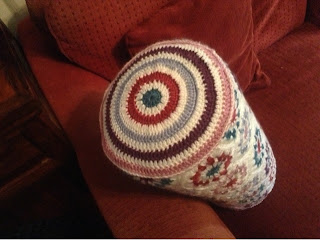 I'm rather pleased with this I have to say, my sister has just put her order In for one in shades of brown & red, then I think I might need another for the other side of my sofa as it's so comfy! 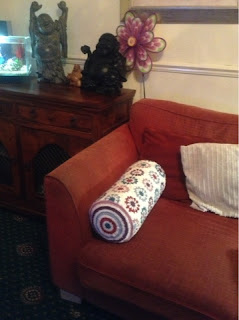 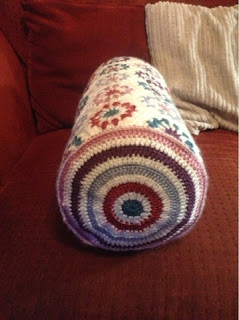 If you fancy making one, give me a few days to write the pattern out & you can have a go yourself. (If it gets past a week, nag me)