Could I be an Activist?

One of my Uni tasks is to create a presentation, around the subject of Activism.... this it not something I ever thought I could be,  I feel strongly about a lot of things - such as animal cruelty and exploitation, racism, homophobia and loads more... but I have never tried to force my views on other people - isn't this what Activism is about?  I was a bit uncomfortable.

I had to find a subject that I didn't think would offend anyone, whilst also being true to my own beliefs.

After a lot of thought  (2 hours drive back home from Uni) I decided to do my presentation on Puppy Farming.  No one can get upset about objecting to Puppy Farming can they?

Feel free to watch the video of my presentation... you might learn some facts that you didn't know.  I certainly did.

So, I did all that research and put together the presentation, having had to first master the workings of PowerPoint (which I have not used in many many years) - sat back, quite happy so decided to send it.

THEN, I find out that we have to take this subject forward and create an "Artefact" from it.  What on earth would I do?  I found it really difficult to think of how I could take that further in a creative way, so I decided to start again   :)

I needed to completely start from scratch, so this time I went with something I know quite a lot about – Crafting for Mental Health.  I feel passionate about people using crafts and art as a release for everyday stresses that life brings.  It can be very meditative and is certainly calming to the soul. 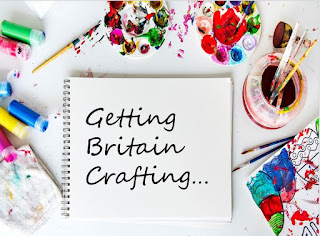 I am really looking forward to doing some further work on this.

As some of you may know, I had to make the incredibly hard decision to shut down my teaching studio back in March,

The decision was mainly based on what my Husband said - one statement that I found incredibly difficult to believe at the time, but because I trust his judgement I decided to go with what he was saying.

He simply said.... "You will not open these doors this side of Christmas".  Now, considering this was way back in March, I just stared at him incredulously..... "You're joking, right?" I asked..... he wasn't.

I had worked out that I have enough money in the business to last until October, so if he turned out to be correct, I would go seriously into debt.   So I closed down my beloved little workshop.

Although leaving the venue was hard in itself, the hardest bit by far was whipping away the social support that the workshop had provided to many many people.  I felt so guilty.  I would miss all those faces that I saw on a regular basis, I would miss catching up with them and finding out how their lives were ticking along.  It was a heart wrenching decision.

So, I closed, I emptied The Shed, sold a lot of things off - how on earth I managed to accumulate all the things I had I do not know!

On the 31st July I handed in my keys and left for the last time.

I have always had a plan, an idea of what to do next, a life map if you like... and now I had none.

I didn't know I was going to need a new direction... I thought I would be on the path I was on for a while yet.

I took some time out to lick my wounds.

Then, one evening over dinner, my Husband just said.."Why not do that Uni course you have always wanted to do?"

I thought about it... I have always said I wanted to go to Uni, specifically a glass course at Sunderland University.  I have always had an excuse not to.  This time I had no excuse.  I had no job, I had no real commitments any more, maybe this was the new direction I needed. So, I applied, totally not expecting to get in. I had no decent grades, nothing that I thought that a Uni might be interested in.  But I did get in, much to my amazement.

I started in September, on a Foundation Course... so not much creativity this year as such, but Maths and Study Skills.  However it is still very interesting... and I am loving the Maths.  Who would have thought?!

I am planning now to revive this blog and let you know how my journey progresses.

Hope I can find something to write about to interest you  :)