I started this blanket way back in July when I needed a smallish project for a trip away.

I was really enjoying making it, the pattern, once learnt, is quite easy...but, I came home, put it away and forgot about it.

I don't often buy patterns, usually I make them up as I go along, but I had stared too much at this one in a shop and thought that I would probably end up reproducing it from my head, so why not buy the pattern and give the designer the credit she/he deserves. 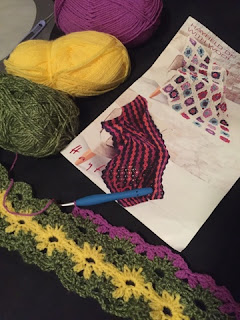 So, what should I do, keep it for the next trip?  Or dig it out and get it finished?

The pattern is number 7257 and you can find it on Amazon HERE if you like it.  It has the flower blanket, like I am doing in the photo, and a motif style pattern too.

I am using Stylecraft DK Yarn in a mottled green, sunshine yellow and a pinky purple shade.

Adults like to play you know..... it's true, crafting is theraputic and allows you to relax and chill.  (As long as the craft you choose isn't too taxing on the mind of course!)

The Button Tree Canvas class I did in the summer achieved just that, a relaxing, mindful, calming couple of hours, with a nice wall art to take home at the end of it.

We started by drawing a simple brown tree, I find that being really mean with acrylic paint on the brush, and dragging it over the canvas thinly, you can create a bark like effect without any effort at all.

I also take a hair-dryer to these classes to dry of the paint before we start sticking the buttons in place. 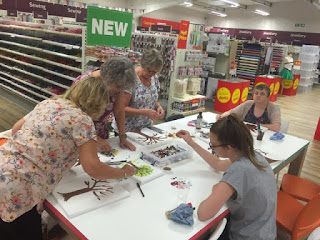 Some people had colour schemes, look at the grey and yellow, doesn't it look great?

And some people just took the buttons that grabbed their eye and used those. 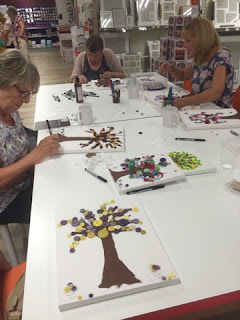 Little flowers were added at the bottom of some. 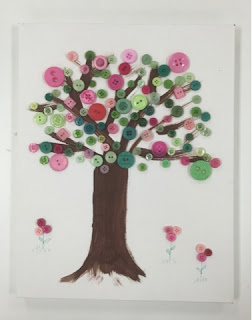 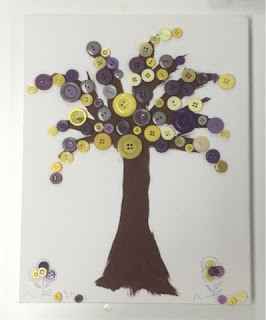 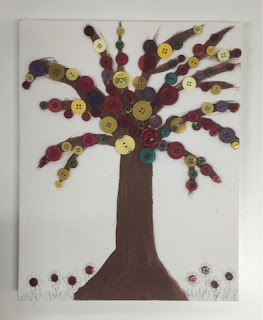 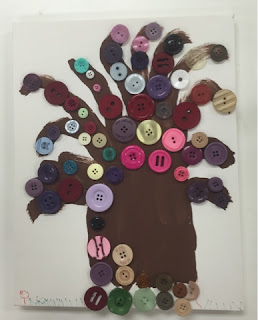 And butterflies on others... 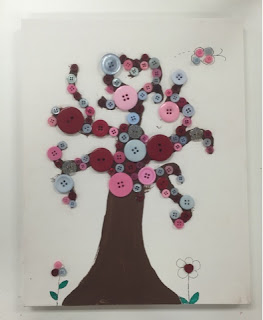 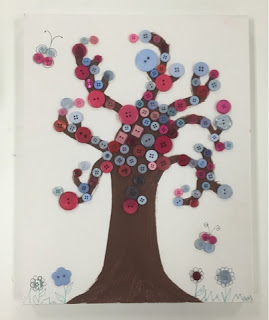 And all the ladies had a lovely work of art to take home.

You don't have to be an artist to make these button trees - just a little time and space to let yourself chill and create.

Try it yourself...  (ooo, did that sound a little like Neil Buchanan off Art Attack?  Whatever happened to him?) 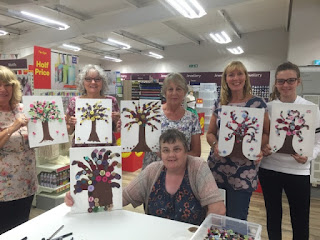 If you fancy doing a class with me, I will be running this workshop in Brampton Community Centre on Friday 11th November 2016.  Shout out for more details.
Posted by Unknown at 23:21 No comments: 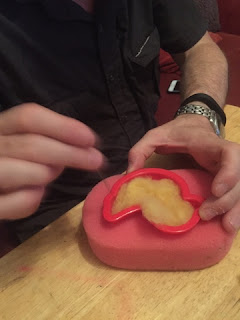 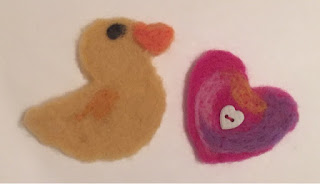 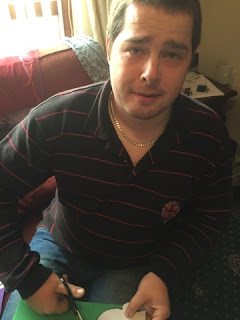 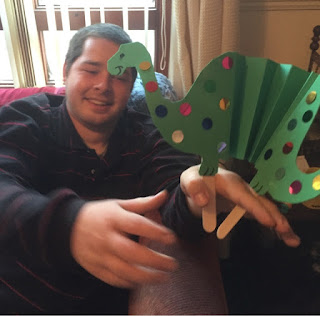 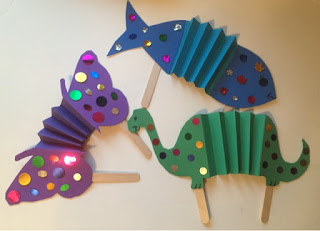 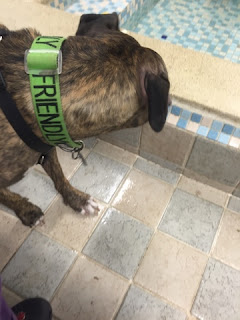 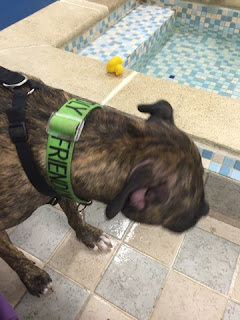 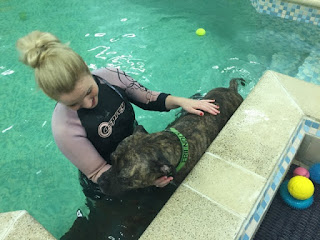 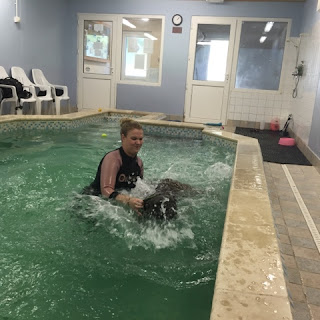 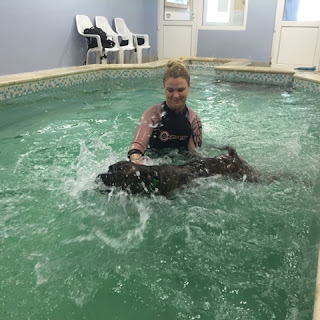 Way back last year sometime, not sure if it was a birthday, Christmas or a Mother's Day, I bought my Mum a gift of a book - 'Knit-a-Bear'.
I also bought her bear coloured yarn, patterned yarn, stuffing, buttons so she could make herself a bear - nothing like a birthday gift that you have to make yourself is there ?  ;)

I WANT A BEAR, I shouted rather loudly.

The making of said bear might have been a secret if it was not for the fact that she had not surreptitiously asked me for "bear coloured yarn" from my stash.  To be fair though, the glittery purple dress was a secret.

A little while later I was presented with my new bear, and how cute it was, with her lacy purple frock and matching hair (ear) bow.  She was just a bit too cute. 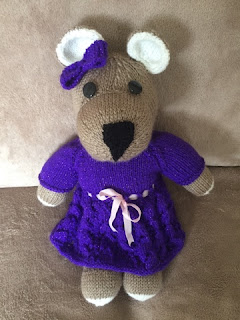 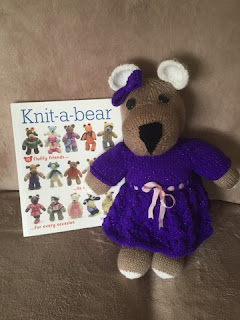 Someone else loves it too, but she's not having it - it's MY BEAR!!

(Seriously, could anyone love a bear as much as this?) 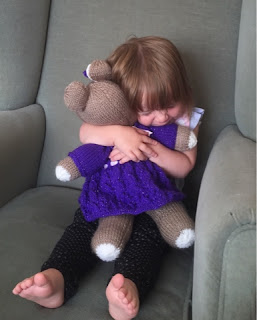 By the way, this bear book is a fab book if you are a knitter, so many very cute bears to choose from.  My sisters had dungarees on!!

You can find it over on Amazon by clicking HERE.
Posted by Unknown at 13:00 No comments:

I have had my YouTube channel for ages now and all I have had on it is a tutorial of how to make a paper snowflake, and a few videos of Ruby when she was a puppy.

So, time to start using it properly I think.

I have uploaded a few tutorials, just so I could get the hang of editing the photos to make a video etc.... I found a great little app called Splice by GoPro, it's really easy to use and upload - which is useful for me!

The tutorials I have just put up are step-by-step photograph ones, with some instructions along the way. I fully plan to do moving videos too, but one step at a time   :)

There are a couple of Christmas themed crafts on there, and some Kid's crafts too, would love your feedback on what you think if you have time. 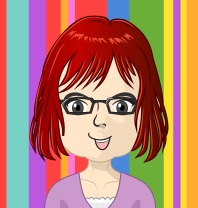 I totally feel as though I have abandoned my dear old blog...  life has just gotten so busy with Grand-babies and lots of classes, things to work on, people to see - I am sure you know how it is.

I have keep reminding myself to pop back in and write up some stuff, but then I get distracted by other things and never get it done.

To be fair, nothing much has happened to report, except the usual classes and workshops,  and I am sure you are sick of seeing those time after time - just how many times can you admire a pin-cushion?  (probably a few, but you know what I mean)

So, what have I been doing?    Well, working on lots of new ideas for classes.  I am seeing similar faces to my classes now, so need to offer something new as they are surely not going to want to repeat stuff they have already done.  This takes considerable time as I have to think something up, make it up, write it up, then plan a class around it.  It's at least a full day's work for a new 2 hour class.  But I am totally enjoying thinking of new things to teach, it keeps my brain alive!

I have also just had a hugely busy weekend working in London's Hampton Court Palace at Kirsty Allsopp's The Handmade Fair.  I thoroughly enjoyed that, but was shattered once I got home - it has taken me a few days to grab some energy back.  I will blog more about that later, as I have some photos on my phone somewhere.