I have finally finished my Cosmos / Universe piece.  I am calling this piece 'My Universe'.  It is made from glass, both cold and hot worked. 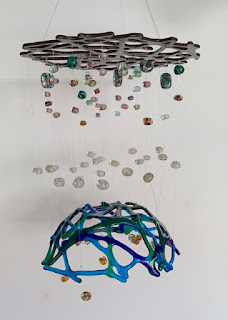 I think it worked out how I originally planned it.  My idea was to take a 'core' sample of the universe, how I depict it, and create a glass mobile to represent this small sample . 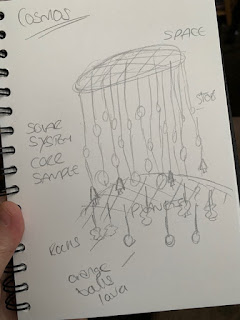 And this photo was always in my mind as a guide to what I wanted to show.  A sample digging down into the earth from deep space. 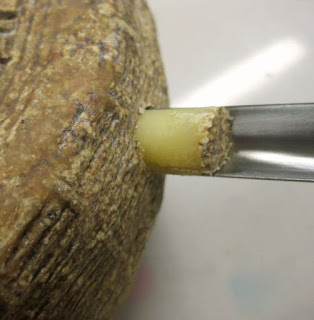 I made five different layers, each representing something that I felt was there, but perhaps we could not always see. 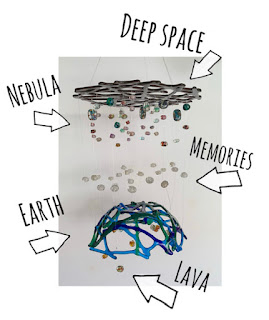 My first layer was to represent Deep Space.  I would have liked to have used black glass, but unfortunately didn't have immediate access to any, so dark amber it had to be.  I deliberately designed it to have the open weave kind of effect rather than being a solid slab, because I wanted to show that there was more to consider even outside of what we know about the Universe and Space.  This layer was created cold in the kiln, then the kiln is turned on allowing the rods to fuse together within a large metal ring that measures 40cm in diameter.

The next layer I wanted to depict was Nebula.  The colours of Nebulas fascinate me and are actually quite easy to translate into glass beads, due to all the beautiful coloured frits (broken glass) and enamels you can buy.

Using a hot torch and some glass rods I made a lot of coloured beads, mainly in blues and pinks and purples because I felt these colours worked well between the (supposedly black) top layer and the next layer which wasn't going to have any colour at all. I didn't plan any particular effect of finished bead, I just picked up whichever glass I fancied working with, and poked it, swirled it, allowing the colours to implode which in turn allowed the bead to design itself.  Almost like I didn't want any control over the final outcome, I wanted it to be as chaotic and self-forming as it could be... with only a little help from me.

The next layer I have called 'memories'. It depicts the fact that if you have lived in this universe then you never actually leave.  I have used the cremation ashes of a friends dog encased within clear glass. I would have liked to have used the ashes of a loved one, but I don't have any, plus I thought that some people might cope better viewing the piece knowing it didn't contain an actual person.

These 'memory' beads are made in quite a uniformed manner. It has to be a controlled make to ensure that all of the ash is well encased within the glass, otherwise the beads can have sharp little pieces sticking out.  When a loved one died we are taught to look up to the sky and assign them a star, so I wanted this layer to be hovering above the earth in plain sight.  These beads, like the Nebula beads, are made on a hot torch using rods of glass.

I felt that if I was doing a core section of the universe then I needed to include a planet, and the planet that I thought that would be recognisable by colours would, of course, be Earth.

So I started this off the same way by doing a 40cm mish mash of glass rods in a steel ring in the kiln.  Once fused down after one firing of the kiln, the piece then had to go back in to be slumped into the shape I wanted.   I re-fired the piece on a slumping schedule to allow it to drape over an upside down ceramic bowl.  I would have preferred a shallower bowl if I could have, but having limited supplies at home I was quite pleased with the shape I actually got.

The final layer I chose to do was to depict lava droplets within the Earth.  So I made small orange beads for this and hung them under the Earth's 'crust'.

I am pleased with the final outcome, there are a few things I would have done differently, as I have mentioned, had I have had the materials or tools, but on the whole I am pretty pleased with it.

I expect that a small explanation of the final piece might help people understand what I am trying to say, although it could be perceived in whatever way that people imagine their own universe to be perhaps.

The piece measures about 40cm across by 60 cm long.  All the layers are held together with nylon fishing wire, and it is currently now hanging from my shed roof.   :)