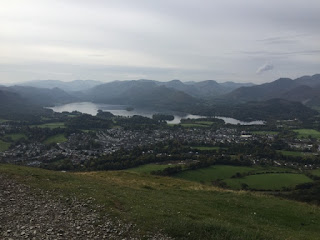 Last Saturday was the Vulcan Bomber's last Northern flight before retiring.  Now, this is an aircraft that Hubster has been following for years, and we have travelled to see her fly a good few times.   Waiting in traffic jams, parking naughtily  (in Taxi ranks), setting up camp chairs to wait and watch - you get the picture?

So, when her last Northern tour was announced, of course he had to go.  He was trotting off on his own that day as I had something planned, but as those plans fell through I found myself able to trot along with him - and Ruby of course.

We drove to the bottom of Skiddaw and walked up the Wainright Fell named Latrigg.

We got there about 2 hours before the Vulcan was due to make an appearance - not so much to grab a space on the hillside, but there isn't that much parking at the bottom, and we were lucky to find a space.

Once there though, fellow plane spotters were in abundance, all grumbling about how they hoped the flight path was correct and that the pilot wasn't going to go round the back of the fell and through to Thirlmere that way.

I had climbed this hill with the promise that the Vulcan would appear, so it was news to me that there might be another route.  Apparently, they all grumbled, it was a risk they were willing to take for the best photograph. 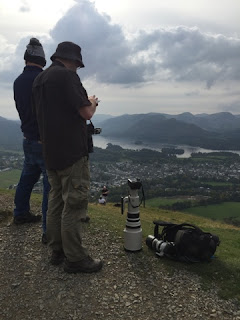 It was quite funny eavesdropping on conversations though.  Four young ladies walked up the Fell with a guide book in hand, reading that this was one of the best views of Keswick that you could get (it is!). They went on to discuss that they didn't think it would be such a popular view but were amazed by how many people were there!  Little did they know. 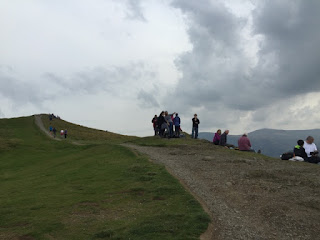 Tripods were erected, with a magnificent view down the valley towards Bassenthwaite Lake. You can just about make it out between the two fells there. 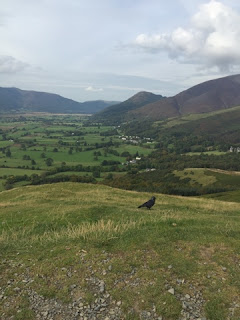 Now, Hubster has a gadget - I prefer to call it an "Anorak Pad" as he really is a bit of an 'Anorak' when it comes to his aircraft - but this gadget, that looks at which planes are in the sky at any given moment, flagged up that the Vulcan was up there.... somewhere..... but where.

Oh, there, behind us, a little grey triangle on the horizon.  Not even big enough to catch on camera.  No sound, no roaring of those magnificent engines, no nothing.  Gone.... last flight...... gone.

As predicted, the pilot went around the back of the fell and we missed it.

Still, apparently it was worth the risk, they all said as they trudged down the fellside, huge lenses banging against their sides and a tripod tucked under their arm.

Still, Ruby had a great time and walked her first fell.  She learnt some countryside etiquette on not chasing sheep, and she found (and rolled in) some fox poo which seemed to give her immense pleasure.

And Hubby?  After his disappointment, he had a dog to bath - fox poo stinks you know!   Well, it was his idea to go up there after all   :) 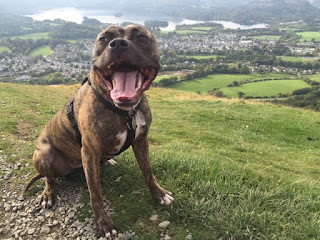