When I was at the Flame Off, I spent some time with the effervescant Ray Skene. At the class we both attended he showed off some of his marvelous Lampwork beads.


My eye was immediately drawn to a string of frit covered beads in white with lilac and hints of green. "Ooooo they are nice" I exclaimed, to which he said "£1.00"!
Eh? £1.00, nah, I must have heard wrong, so I laughed nervously and continued to fondle them.


Talk about it being my lucky day :)


So I kept the large round ones, I will do something with those later. The shaped oval ones I decided to make into a necklace for my Mum, she has a dinner to attend and needed a nice necklace.


This is "Tea Party" called so as it has a cute little Teapot toggle clasp. With Ray's lovely beads I have strung Swarovski Crystals and some Fire Polished Czech Crystals. 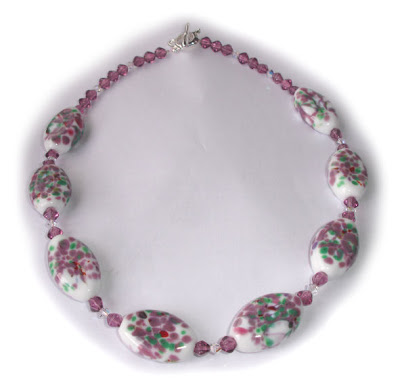