Way back in January I went on holiday to Portugal, and I wanted a project to do at the airport, on the plane, at the beach.... you know how it is?

I decided on Doilies, or is it Doilys?  Either way, those.

I bought some reels of Crochet Cotton and dug out my very fine hook, and popped them in a sandwich size lunch box to keep everything together.

I did get some questions about the tiny hook at the airport though, only on the way back as it happens, but they were very interested in it.  Try explaining crochet in Portuguese, even with their vast knowledge of English, this wasn't a word they knew.  As I stood there almost playing Charades as I acted out how to crochet (yeah, why do we do that?) while waving the hook in mid air, they must have decided I wasn't a huge risk and let me through.

So, I have downloaded some vintage patterns, to be used with my very bright colour choices of greens and purple, and started to play. 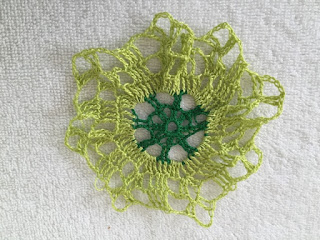 Now these patterns used a TR crochet, but I wasn't sure if that was an American TR or an English one.  There were no other clues to what terminology the pattern was written in, so I made up both.

Hmmm, both so far so good, don't you think? 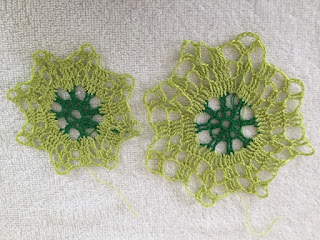 I continued with the smaller one, but after a few rows my petal edges were starting to curl in, so I am guessing I went with the wrong option. 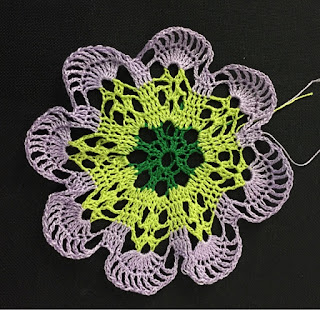 So I switched to the bigger one and after a few rows my petal edges are rippling.

I'm getting bored and frustrated with this now.  Working this small makes my fingers ache as I try to tension the cotton, and I am rather wishing I had brought a big sod off blanket to do instead! 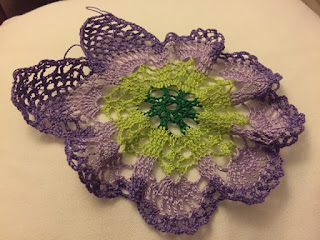 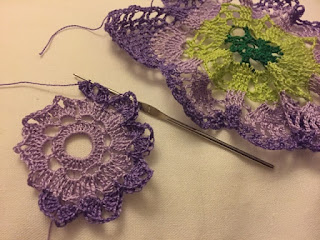 Let's just say from this point I had given up, and I did have a 3 x 100g balls of DK in my suitcase for a 'just in case' emergency crochet project issue.

I am not ashamed to admit that I do use some of my precious luggage allowance for yarn  ;)  More on that project later, but for now the doilies have been abandoned to the "works-in-progress" pile.
Posted by Unknown at 14:00