I was recently commissioned to make some cushion covers from men's shirts.  The gentleman who owned, and obviously wore the shirts, had passed, so these cushions were to be a precious memory of him.

First of all I was told they were to be for a 16"  (40cm) cushion pad.  And there lies the first issue. You would think that you could just cut a square and sew it up, wouldn't you?  But at no point could I get a 16" measurement that incorporated the logo too  (Ralph Lauren).    The measurement across the shoulders was less than 16", but if I dropped down I lost the logo as the measurement down from that didn't measure 16" either.

So, a bit of artistic cutting and rebuilding was needed.

First I took off the sleeves (both of them), and sewed a little fabric under the shoulder seams to make up to 16" (plus seam allowance of course) across.  I cut off the back and used it to panel in a piece at the front, therefore utilising the buttons from the front to be the opening for the cushion at the back.

To make it less cushiony and more "shirty" I sewed a sleeve back on the front, laying across the chest.  I also left the neckline in place, sewing up all the gaps by hand. 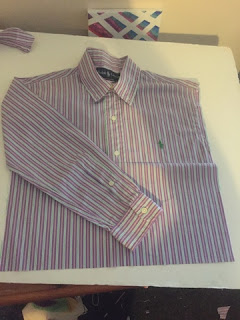 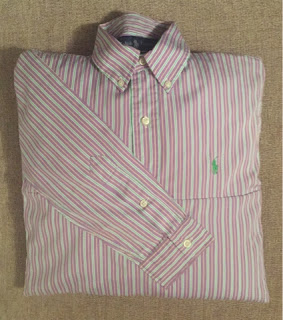 And the back.... perfect button opening for the cushion to pop in and out for laundering. 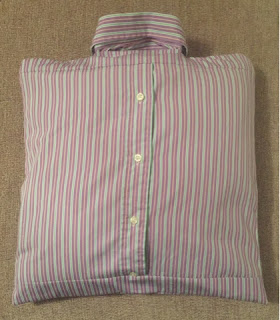 So, that was one done, onto the next.

The blue one was a bit trickier again as it was short sleeve, so a huge lack of fabric to work with. 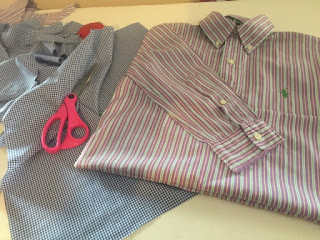 So what I did was I simply cut a square out of the main part of the shirt to include the neckline and logo, hemmed it all the way around and appliqued it to a plain square taken from the back of the shirt. 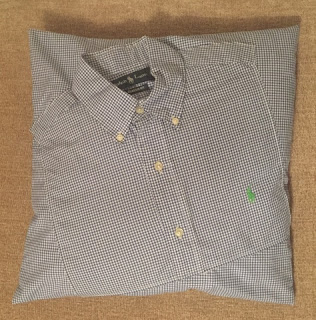 Again, I used the buttons from the front to make the opening for the cushion to pop in and out.
The blue method was definitely easier, and both look good I think! 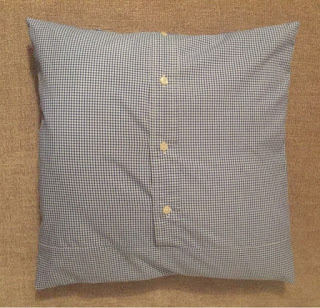 I hear the recipient was pleased anyway, and that's the main thing   :)
Posted by Unknown at 10:02