What was the weather like with you yesterday?  Here in Carlisle it was hot, hot, hot!

Our first thought was we will walk up a Wainwright  (a collection of 214 fells in the Lake District) as we have already walked a few and plan, in our lifetime, to complete all 214.  We are up to 16 at the moment, so a long way to go  :)

We haven't been out walking this year at all and we miss it, there is nothing quite like blowing the cobwebs away from the top of a windy Lake District fell.

Sadly though, we made the decision not to go based on the heat of the sun would you believe?  We moan when it's cold and we moan when it's hot, there's just no pleasing us sometimes  :)

But, Dotty Dog is getting on now, her hearing is failing, her eyesight is failing and she has a touch of arthritis too - poor old girl.  So we thought dragging her up a fell in the blazing heat would just not be fair, and we couldn't bare to leave her at home, it just wouldn't be right!

Instead, we decided on a little flat walk around the local park, so she could have a swim in the river (it seems to ease her old bones).  Do you wanna join us?  Let's go.....


We parked the car in Rickerby Park in Carlisle, Dotty always knows where we are before she even gets out of the car, so the tail was wagging furiously.

From there you can walk down by the riverside where on a sunny day lots of people go for a paddle.  Even the cows! 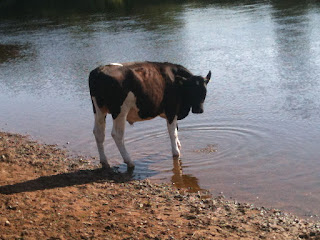 We wandered down to the edge of the water to let Dotty play. There was a couple of teenagers there, in the grass bank, just sitting having a drink, but when we appeared they decided to treat us to a show of pretend sex, which was nice!  What I really wanted to do was to go and throw some river water over them, but instead I ignored them - wasn't I grown up? 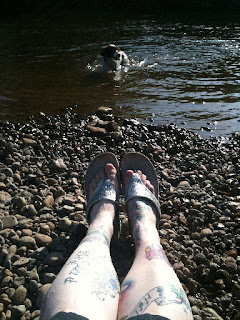 I sit and watch, Andrew throws stones.  It's his job. 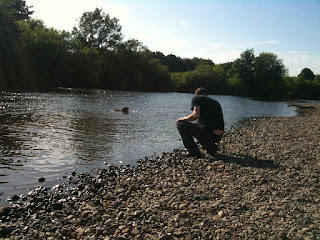 When she was starting to tire we took her out of the water and back up onto the grassy bank where she could run about and dry off. 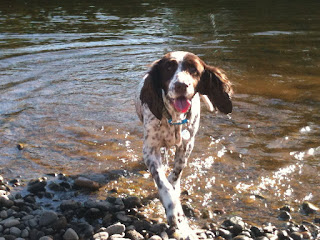 Soon we were at the suspension bridge where we were to cross and walk back down the other side of the River Eden.  This bridge is part of the route if you were walking Hadrian's Wall. 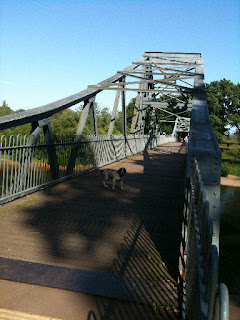 I've seen kids jump off this bridge, but it's not a clever idea as the water is way too shallow.  I held a young boys foot together once when he jumped off, whilst waiting for the paramedics to make their way down.  It was most unpleasant!

Over we went and down the other side, which trails through Stoneyholme Golf Club. 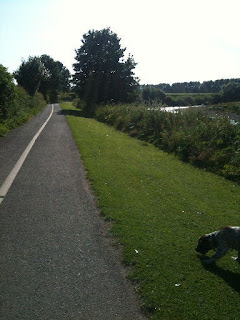 What's that I spy?  Oh, a pub, how fortunate, should we have a cheeky wee drink?  Would be most rude not to. 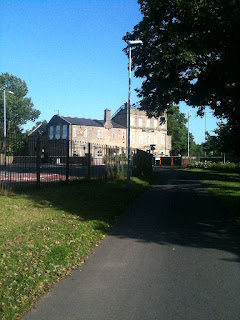 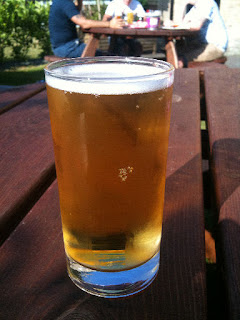 And it was just a little drink as I have a bladder the size of a walnut & really didn't want to have to find a bush to squat behind on the way back !  - nettles and stuff.

While we were are the pub though a family sat on the table outside next to us, the lady went into the pub as the meals arrived.  While she was away her poppadum blew off her plate and across the bird poo covered table.  Her chivalrous fella grabbed it and put it back on her plate, said nothing, and let her eat it.

Back to the walk then as Dotty was getting agitated eyeing up some blokes gammon steak, we walked behind the Sands Centre to Eden Bridge that would take us back to the other side. 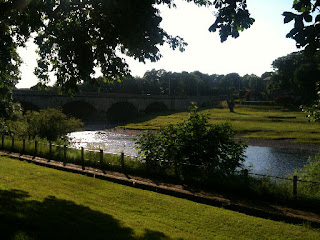 Over the busy 4 lane bridge, where doggy leads are a must. 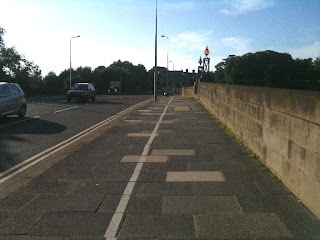 And down through Eden Bridge Gardens to get back to the river-side. 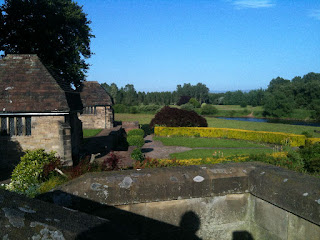 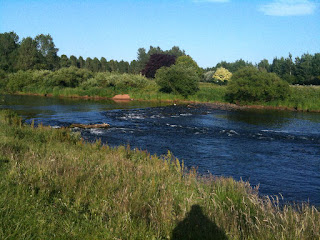 There is a nice big open part here where Andrew tried to play "fetch", but it was a case of "You threw the ball, YOU fetch the ball!"  While Dotty watched. 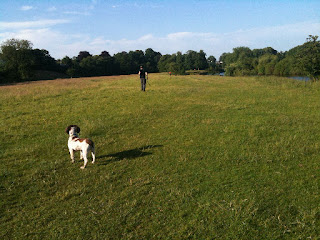 I see cars, we are back at our starting point. 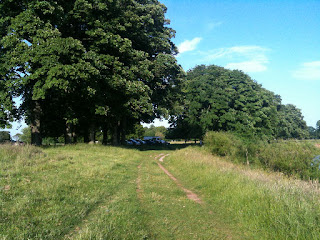 Now, time to go home for tea, Linda McCartney 'Scampi' and salad, washed down with another cider, coz I can! 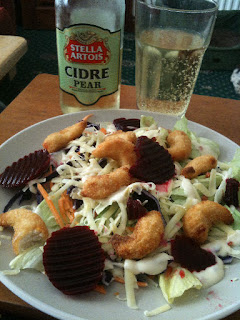 Email ThisBlogThis!Share to TwitterShare to FacebookShare to Pinterest
Labels: days out, Dotty