A visit to Cliff Richard's Vineyard.

Now, listen up Portugal, this is what we call decent holiday weather - lovely sunshine & white fluffy clouds, like what we woke up to on Tuesday morning. Not the rain you've been generously dishing out over the last few days. 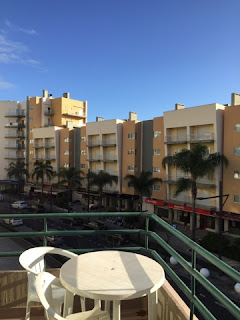 Both us us had headaches in the night, we blamed the wind chill blasting through our ears the previous day, we both have good 'walking kit' at home for hiking up chilly Lake District fells, but just didn't think we'd need to bring it to a sunny climate such as the Algarve!

Anyway, we woke up to a lovely bright day so hopefully that miserable weather is behind us and we can look forward to a few days of sunshine before heading home to Blighty.

Today's plan, therefore, was to visit Cliff Richard's Vineyard. Now, this isn't a 'Cliff Richard' thing you understand, it's a 'wine' thing :) (although I did always quite like the song 'Devil Woman'.)

We were picked up at 11.00am, there was just us in the mini bus. Guess there's not many tourists about this time of year.
We drove towards Albufeira and it did tickle me to see pool liners propped up on the side of the road for sale. I suppose it's just like creating a fish pond, just on a bigger scale. 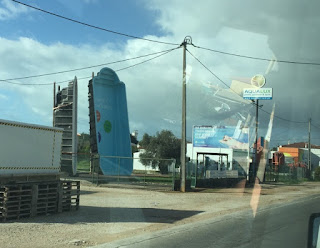 20 mins or so later and we were there. Just us again. Private tour for two then. 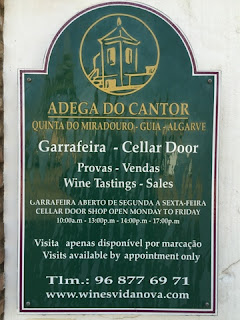 "Adega Do Cantor" means 'Cellar of the singer', apparently. 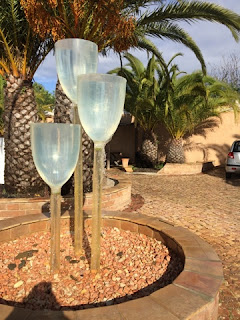 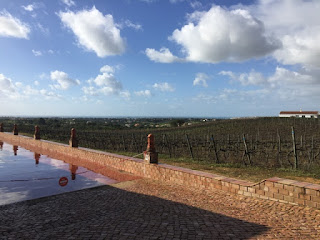 Now then, here's the story, Sir Cliff Richard (from here on in referred to as CR) has a villa and vineyard "down the road, way behind those trees over there.  You can't see it, it's private."

In a nutshell CR and his business partner Nigel each have a vineyard. Nigel's was the one we visited, CR likes his to stay private. They share the business, they each grow grapes, they do whatever they do with the profits.
But it's CR's name on the fliers urging you to go visit 'his' vineyard. I guess Nigel's face (a non celebrity) would just not attract the punters. But it's Nigel's vineyard that you go to.
Apparently there are a lot of disappointed CR fans when the bus rolls up and they get told that they're not actually at his house, or even his hillside with grape vines all over it.
Still, as mentioned before we were there for the interesting tour of the vineyard. We certainly weren't expecting an impromptu rendition of 'Summer Holiday' with tea & cakes.

So, just the two of us there taken to a bandstand type area at the top of the hill, looking far & wide across a gorgeous view to the coast.
'Must remember to take a photo of that once the lady has stopped talking', I think.
Then the rain starts. The bandstand has a perfectly good canopy, but the mere sound of the raindrops falling on it threw our tour lady into a mad panic. (We have come to understand that the Portuguese really do not like rain at all)
She ushered us into the covered area where the crushers and vats were - big shiny, super clean machinery, ready for their next harvest later on in the year, but then the wind blew a few raindrops in and she decided we would do the rest of the tour indoors, beside the barrels full of Reserve red wines. 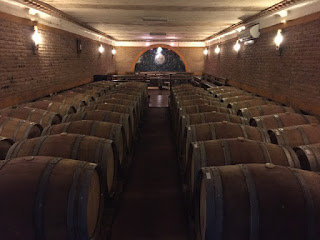 That was the last we saw of outdoors, I did expect to wander around the grape vines, maybe marvel at the views, what we actually got was a (albeit very interesting) talk about grapes, soil, harvest and sea breezes fighting mildew.

Then it was tasting time. Now as Hubster is a non-drinker, if we'd have been in a large group he would have graciously accepted his sample and sneaked it to me to neck on his behalf, but as there was just us two, we couldn't pull that off, so I only had single measures (we paid the same though!!) 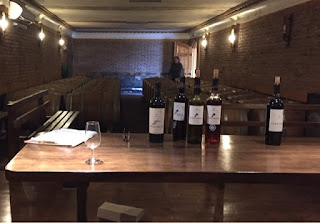 I have to say though, the wine was gorgeous, and I did buy a bottle. Sadly I can't take it home as we only have hand luggage, so no liquids over 100ml, I'll have to drink it before we leave. No hardship. 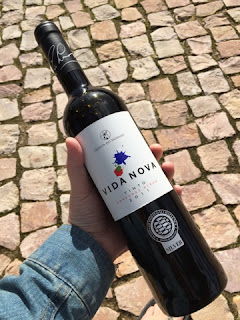 I also bought a drip stop gadget, I'll
show you that at a later date, as I can take that one home with me :) 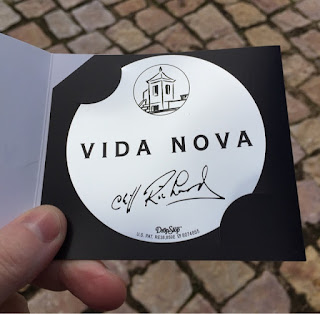 I asked if we could go back outdoors to take photos as the rain has stopped, but was told "no, we can't go back, sorry, once the tour is finished you can't go back" .......ok then, thanks.  Weird as there wasn't another tour waiting to go in or anything.

And that was that, we were out in the courtyard waiting for our return mini bus back.

On the way back the driver turned away from the main road from which we'd come and drive down some bumpy village roads, then he stopped and in broken English (which was much better than my Portuguese) he informed us we were outside Cliff Richard's villa & vineyard.
I wonder if he feels people are duped into going so gives them a freebie view on the way home :)
Wonder if he is allowed to as he didn't stop long & we didn't get a chance to get out of the bus.
So there you are, we actually got to go to the real vineyard of Sir Cliff Richard. 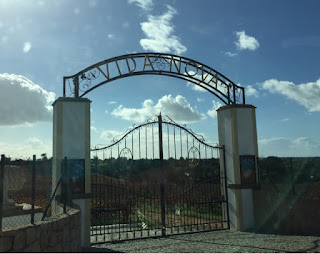 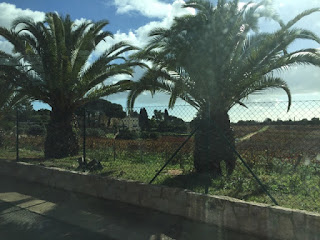 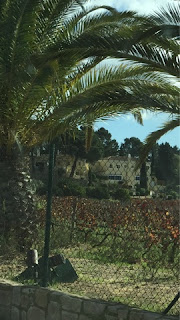 Not sure it was worth the money though. 25.00€ each (one without wine) for an hours talk, and very little to see.  Having said that, if you managed to get there yourself then it was only 7.50€ for the tour, so might be worth checking bus/taxi prices if you're ever thinking of visiting, as it seems, between us we paid 35.00€ for the lift!!

After getting dropped off back at the apartment we headed out for lunch. We were searching for a Creperie as Hubster had cravings for one. We found a cafe away from the Marina this time, a place you might expect locals to enjoy. Often these types of places do the best food.
The owner/server was proper grumpy though, didn't look as we walked in, not a smile, actually he only spoke once when Hubster asked for a Coke Zero - he barked back 'Pepsi'. Otherwise you just got a grump and a nod.
He got his crepe, which he enjoyed. I had egg & chips which took me right back to my school days :)
When the folk on the next table all started smoking, we left. Most places in Portugal now seem to ban smoking in eateries, but there's one or two that still allow it. We are so not used to it anymore that it's quite difficult to sit in a cafe surrounded by it.

So we went for a walk and saw a beautiful rainbow... 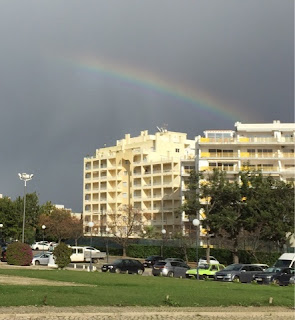 Which seemed to be the warning for the clouds parting to send yet another shower of the wet stuff down upon us. That brolly, bought yesterday, has been worth it's weight in gold!
We spent the next hour or so over coffee & cake, taking advantage of free wifi and catching up back home.  Mainly to see if the weather we had left behind was any better. 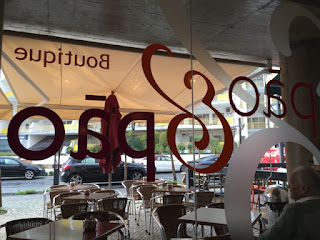 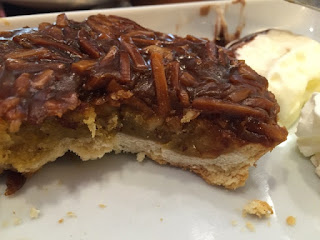 Giving up on the afternoon as a bad job, it was back to the apartment to dry out & crochet. One thing about sheltering from the rain, it gave me plenty of time to make a new baby blanket. 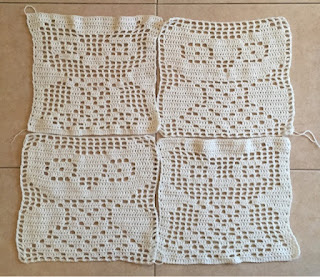 As dinner time approached, the weather was dry enough, although a chilly wind was bowing, for us to attempt to get back into the Marina area for dinner. We had been touted for the last three nights to try an Indian restaurant, as we'd promised the young chap (feeling proper sorry for himself as he stood out in the rain) we thought we'd better go. Such a hardship you know ;)

It was the Muglay Clay restaurant, the us usual chicken tikka for him and I had paneer tikka masala. The paneer wasn't 'tikka'd' but it was delicious anyway. 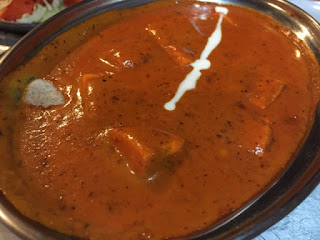 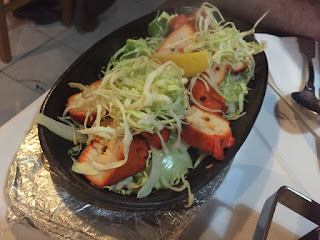 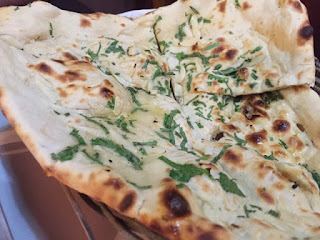 After a couple of complimentary Ports (when in Portugal.... ;) ) it was 9.00pm and past our bedtime.
It's strange, I would dream of going to bed before 11pm at home and even that's an effort, there's just too much to do. But when your faced with no TV, no internet and a chilly apartment with a broken heater, and your already full of food & wine, the only thing to do is to snuggle up in your (single) beds with three extra blankets & wait for the next day.