It's our last day in Vilamoura, and we've totally ran out of things to do, places to walk, areas to explore... anything really.

Before we came I googled: 'Things to do in Vilamoura' and came up with loads!! Lots of boat trips, sunset cruises, dolphin watching, cave exploration. There was the 'Kings & Queens' show at the casino, the casino itself was also an option, as was a trip to another town/village/city.
The area boasted loads of shopping and a huge array of restaurants. Bike hire was another possibility along with sea-faring equipment such as jet skis. If all else failed, the apartment complex had a pool, we could swim our days away and burn some calories off in the meantime.

The reality was, no boat trips were occurring due to the sea being a bit rough, and the fact there were not enough tourists about to fill a boat.

The casino show was cancelled.... due to lack of ticket sales, and when we went in to enquire about a ticket we very quickly realised that 3/4 length trousers & flip/flops were not the appropriate attire for a casino of that calibre. We were probably more suited to a Blackpool amusement arcade.

A good 70-80% of the shops & restaurants were shut for a yearly holiday that they all seem to take around the beginning of the year.

The bike hire was difficult to set up with no internet & cost 20€ each - a bit pricey we thought, we'd probably be only on them a couple of hours.

The beach was freezing, not that we are beach people anyway, but even walking along it brought chilly tears to your eyes.

We did read about some Roman ruins behind the marina, so we thought we'd head for those. 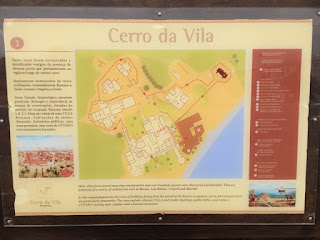 We didn't bother going in as we learnt everything from the information board outside.

So we just peered through the railings for a while. 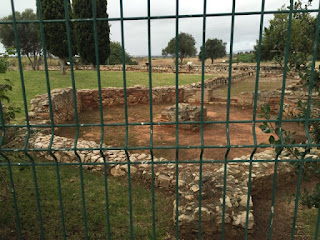 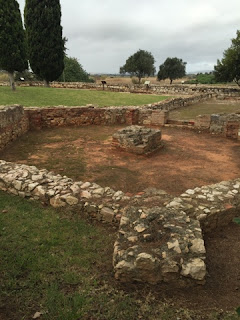 We headed back to the marina.

We spent a while looking in a yacht shop window, looking longingly at the classifieds, wondering how we might be able to raise quarter of a million to buy a nice yacht. Actually, I'd even have been happy with a tour of one right then, they do look magnificent.

I took a panoramic shot of the marina you might like to see. Can you see just how few people are about?  If you look at how many waterside seating areas there are, each one belongs to an establishment on the opposite side of the road, you can now imagine just how many people are here in peak time, and why everywhere decides to shut down for this time of year.

Here's another of a little bar area just off the marina. Deserted again.

There was a distinct feel of 'ghost town' as we walked around this morning. And, to top it off, it was blooming cold!

We spent the next two hours in Pizza Hut, alone, overlooking the beautiful, expensive yachts. 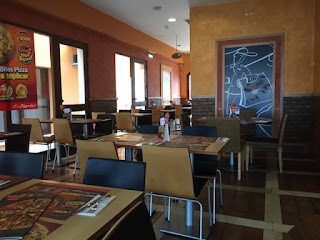 The pizza was gorgeous. Although it felt like a bit of a cheat using a chain restaurant when there are so many independents about, but we really fancied a cheesy bite pizza. And there was free wifi too. 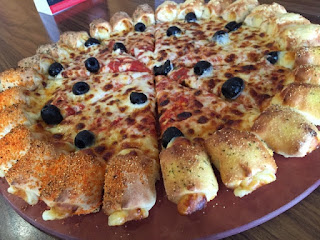 Here's a birds-eye view of where we were.
The little face is Hubster, in Pizza Hut, the little arrow is our hotel. 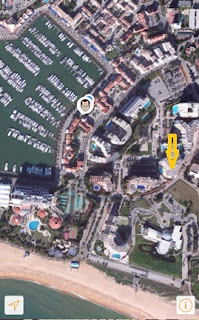 Of course it hasn't all been doom and gloom, we did the long walk to Quarteira, and the trip to Cliff's vineyard. And there was the sunset watching (although that was well chilly), it would have just been nice to have a little more going on, a few more shops open, just a couple more people about. We don't like it too busy, but a little more atmosphere would have been nice.

We sat for a good long while in Pizza Hut, before deciding we really needed to walk all that pizza off before our last evening meal.  Not that we needed any more food, but we were on holiday!

Hubster had been Googling something on his phone and he mentioned something about a Spa... "Let's walk to that", he said.

Now that would be a nice treat I thought to myself, a nice afternoon in a Spa.  how wrong I was.... 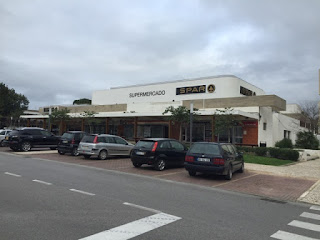 Yep, really, it was a Spar supermarket!  I mentioned about him liking foreign supermarkets didn't I?  Of course we bought nothing as it was our last day and we had no way of bringing anything back, we just wandered about it for a while.

So after our lovely Spa/Spar visit, we trundled ourselves back to the Marina for the very last time.   We were hoping to catch another sunset, but the cloud coverage was quite dense, so we didn't get too see many beautiful colours at all. 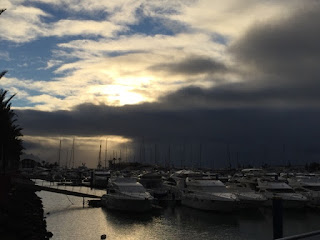 The place was deserted.   We were actually searching for a restaurant tout for an Indian we had noted we should try.   If the touts catch you they try to urge you in with the promise of a free drink, so to get a free drink I made Hubster walk about for 40 minutes to try and bump into him. 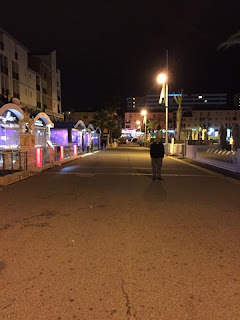 We eventually found him and let him talk us into trying his Indian restaurant.  We made him put a bit of effort in, didn't want him to think we were too easy  ;)

The restaurant was Natraj, and we did save the best until last as it was the most delicious food ever.
I think this has got to be the nicest Paneer Tikka Massala I had ever had - they threw some chillis in for me which gave it a lovely kick.  They are just slightly off the Marina front, hence the tout, but it is well worth the extra few steps - if you are ever there, do try it. 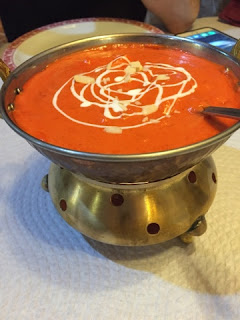 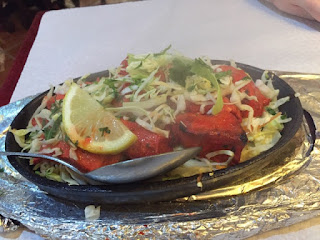 And then it was back to the apartment for one final sleep before heading home.

Goodnight Vilamoura, it's been nice (but cold and damp) to visit you,  Maybe one day, in a warmer season, we will return. 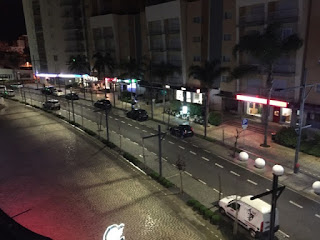