Walking to the lighthouse

You may remember that on Sunday we tried to walk to the two lighthouses that mark the entrance of the Marina. Sadly, rain stopped play and we ended up watching the raindrops from the comfort of a cafe drinking wine (or Coke in his case).

With nothing much better to do we decided to try again today. We started off at the point that we'd abandoned our expedition last time and meandered towards the red & white striped cone. 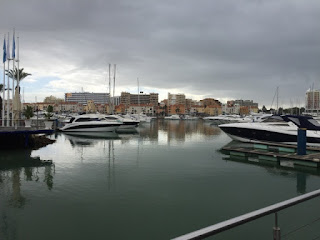 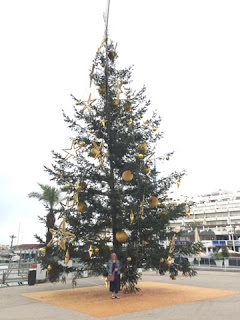 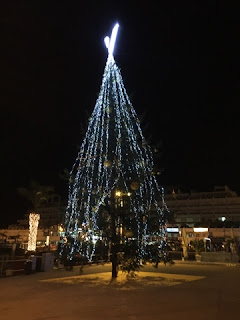 ..... and round the scruffy bit where no one seems to go.

Then we find this. 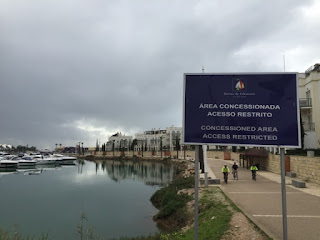 Instead we though we would carry on up the road instead, just to see what we could see. And what did we see? A path, leading to the sea!

We followed it and it took us round behind the marina. 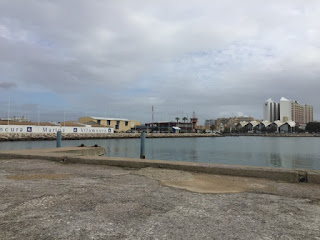 To a point between the two lighthouse.

It gave us a gorgeous view, but just look at those clouds!! 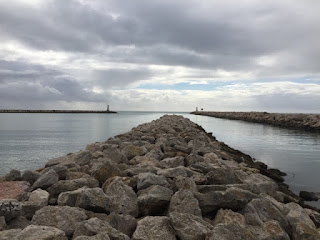 We found a little bridge that took us across to the other bit of land with the lighthouse on, but as with the previous one, we could only get so far due to the rocks underfoot. 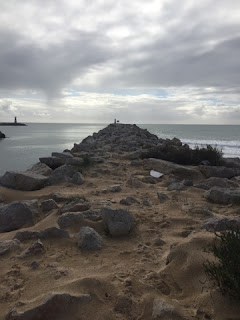 But to the side was the most beautiful beach, the waves were quite choppy which were obviously good for the surf-boarders. 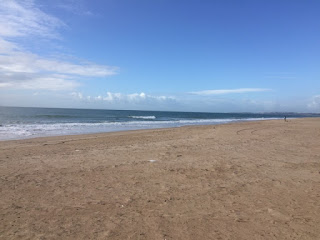 So, of course, now it's time for the obligatory blog photo 'feet in the sea ' moment. 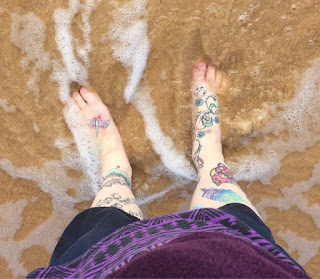 This was my second photo as the first time I failed miserably as the force and the chill of the water caught me off guard and I squealed my way back up the beach. Luckily there was no one about to hear me, and Hubster was too busy taking photos to take any notice of me being silly. I did get my trousers well and truly soaked though, and the walk back was accompanied by the slapping sound of wet fabric against my calves. (or is it calfs?)

Lunch time called and back at the marina we chose this spot, as for the first time since we arrived in Portugal, it was nice enough to sit outside, for a change. 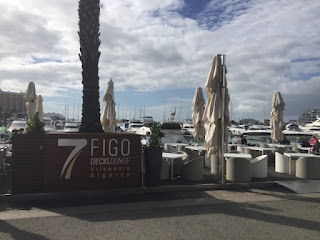 The food was nothing special though, a toastie for me and a burger for him. 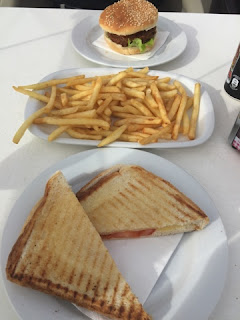 However, the large glass of sangria made up for it.  The waiter asked 'red or white' of course I answered red, please. He didn't have a notebook and came back various times to ask about our order - plain hamburger, fries, cheese toastie. It wasn't looking promising.  The sangria ended up being white, when I mentioned it he said 'I did not understand your instruction'. Hubster said he had the personality of a goat.  Not sure when he's had the opportunity to get to know a goat, but that was his opinion.

The white sangria was blooming lovely though. I'd have it again ;)  Happy mistake. 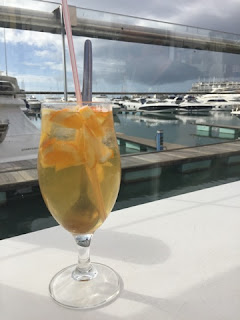 But check out those clouds again, and yep, they opened. Everyone in the outdoor seating area picked up their plates and their glasses and scrambled to get into the covered sections. Us? We just pulled our hats on and sat it out. My sangria grew by half an inch ;) (food was gone by then!)

To celebrate the sun coming back out a while later, we shared a banana & kiwi crepe. Sod you rain clouds, you won't spoil our day. 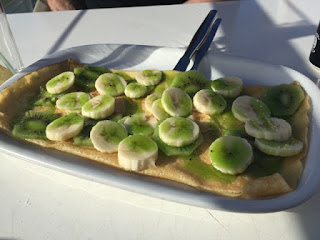 Then to walk it off..... down to the beach we went, to take some photos. Due to luggage weight I left my 'proper' camera at home, so only had my iPhone to snap away with. Still, it didn't do too badly. 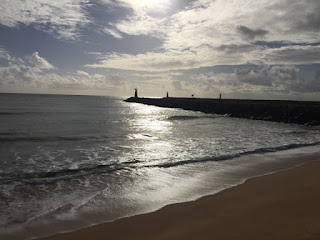 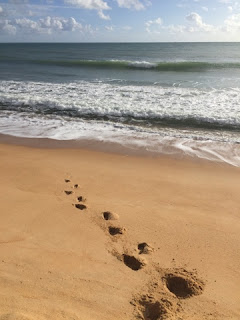 The beach was deserted, except for a strange collection of seagulls, all standing together as if waiting for a boat to come in. 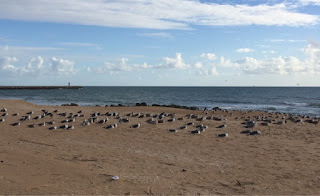 As a feather and flappy thing hater, I was brave getting this close. Not so brave when I disturbed them and they took flight. I got a couple of shots before running away. Made a good photo though :) 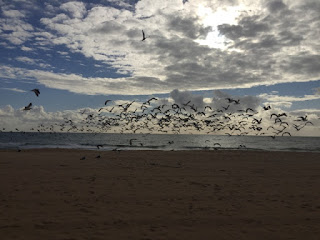 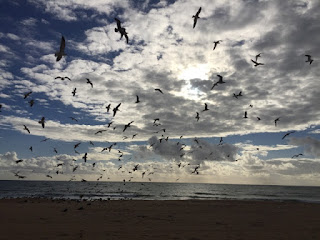 We decided we would stay on the beach, in a deserted beach bar, to drink a cocktail & watch the sunset. 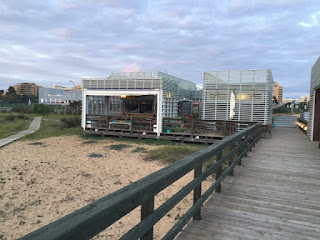 It was so cold by now, I ordered a coffee first followed by a cocktail.   I expected a 'Costa' sized bucket, but got a thimble, so it was never really going to warm me up any. 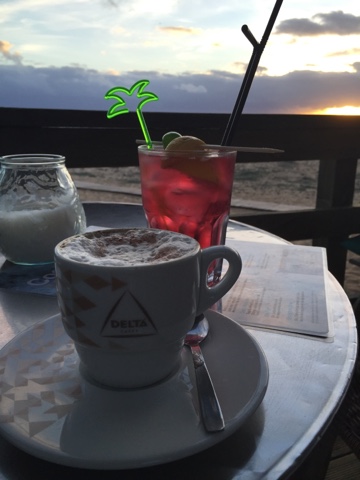 And we waited for the sun to drop. 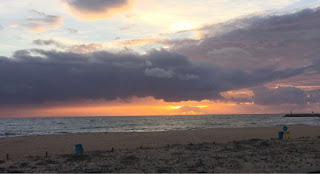 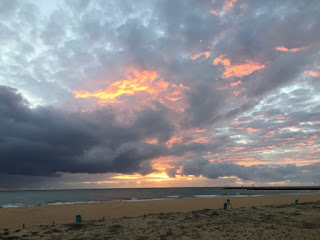 It was quite a sight, mixed with storm clouds from miles away, the sky looked like there were flames behind the grey.
Hubster took a cracking photo through one of his hand made marbles. 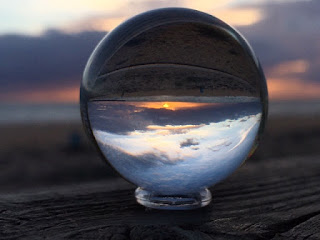 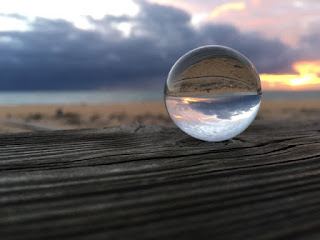 By the time the sun had totally gone to be we were FREEZING! So we headed to a Chinese restaurant for food to warm us up.

I had a veggie pancake roll which was really yummy. Never had one before, but it was the only veggie starter available. Delicious, I could have eaten three!! 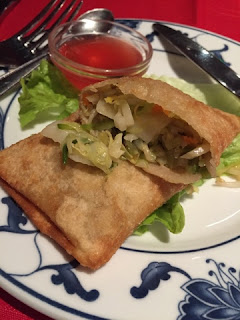 For the main I ordered a vegetable chow mein, but asked for no onions or peppers, as I always do. I just ended up with noodles and bean sprouts, which was a bit weird - not a carrot or a Chinese vegetable in sight, but they tasted good topped with curry sauce. 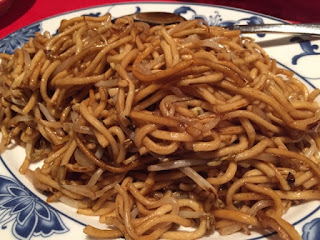 Hubster, the carnivore, had pan fried sweet and sour chicken Hong Kong style, number 64 (I just asked him and that's what he said - dweeb!!) which he said was 'good'. 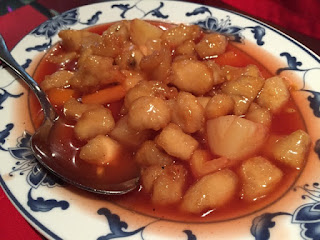 We shared a banana fritter, which turned out to be slices of banana each separately battered. We didn't really want or need anything else, but we forced it down, as you do when on holiday. 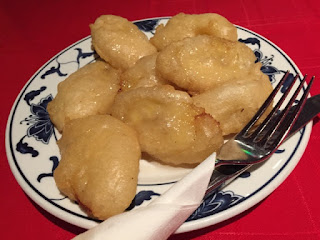 .... as I did both of the complimentary glasses of Port. Hic! 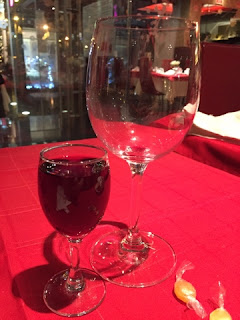 Another day done, another day exhausted with aching feet. Seriously, never take a holiday with my Hubster if you need a rest!