Searching for an Umbrella in Vilamoura

Due to the considerably early nights we've been having, I found myself wide awake at 7.00am. Sometimes this happens at home when I get up, I make a brew then busy myself with emails, housework, dog walking ..... but due to no internet access the eMail/Twitter/Facebook checks were out, due to Ruby being well over 1,250 miles away a dog walk was out, and there's only so much tidying up you can do in an apartment with the bare necessities.

So, while Hubster slept, I sat with a brew and my crochet, looked past the clothes drying on the back of the chairs and watched the grey clouds form out of the small gap in the window. I'd deliberately left just a small gap so I didn't have to face a whole sky of greyness so early on in the day.
I tried to ignore the droplets on the balcony rail and the shiny pool of rain water on the balcony floor. 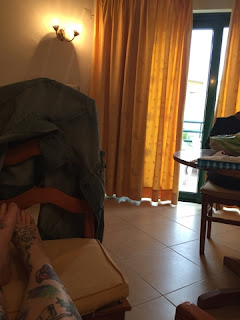 Once Hubster emerged from his slumber it had stopped raining, so we consulted a map and 'he' decided that we would walk to the next little area along the coast called Quarteira, as they had an Lidl store, they were bound to sell umbrellas, he declared.
Now, why you would visit a foreign country and deliberately visit a shop that you have just round the corner from your home back in England is beyond me, but off we went.

At two miles we saw a sign with an arrow stating 'Lidl - 5 mins'.
Ten minutes later came the sign 'Lidl - 4 mins'. Ok, so that minute must have been meant for car drivers as it took us ten, but onwards we went, undeterred.
At 3.5 miles from when we set off we find another sign - 'Lidl - 1km' 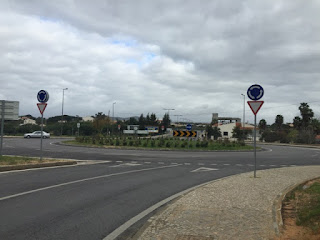 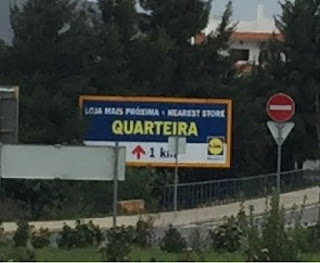 At this point we gave up. It was starting to rain again, the road ahead looked pretty open with little shelter... and they probably didn't sell brollies anyway!

Turning back we decided to walk along to coast edge rather than the road. 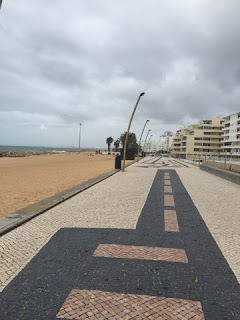 Everywhere was shut, cafes with chairs piled up, it looked a little ghostly. Mind you, it was miserable, which idiots would go out in that weather? 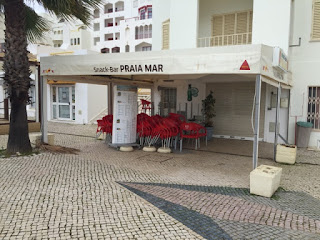 Found a little shop with umbrellas for just €3.00. Bargain. Even better that it was purple, my favourite colour.

I managed a couple of beachy photos before the wind started! 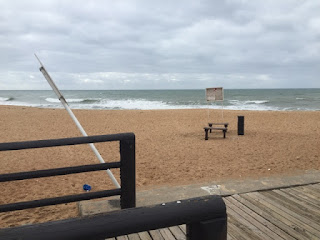 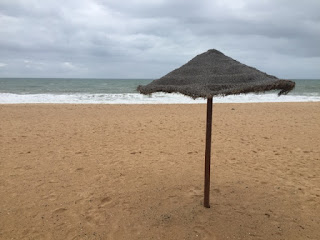 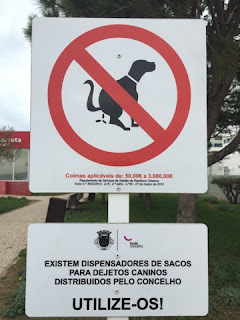 Yeah, you read that right.. THE WIND!

'Blowing a hooley', is how we would describe it in Cumbria. Of course, my brand new lovely purple brolly was absolutely no use at all! We got soaked.... AGAIN!

Once we got away from the coast edge and between the shelter of the buildings, I could finally use my new brolly, the rest of the walk was seen from under our purple canopy. 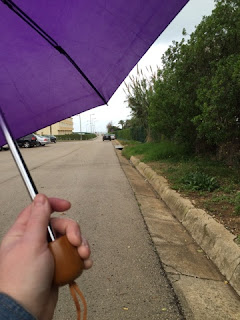 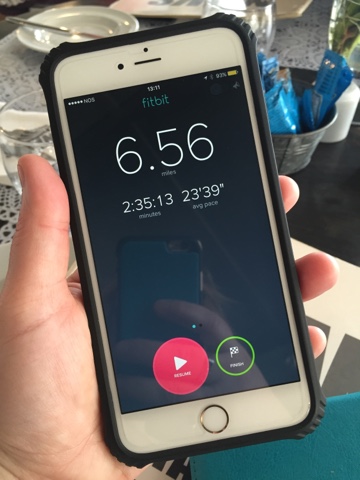 I could have clouted him, it wasn't even lunch time. Sensing how unimpressed I was he steered us towards a cafe for lunch. We had planned on going to a Creperie that we had noted previously, but on reaching the Marina we were surprised to find that half of the shops and restaurants were shut, apparently that's normal for this time of year. And there was us thinking that once the weekend had passed (in this case, yesterday) everywhere would be lively & buzzing.
Anyway, we found a nice place that did a nice mozzarella toastie & wine (two of, after that long walk) and free wifi so we could catch up with the world back home. 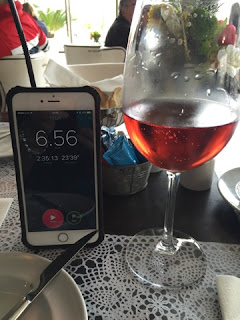 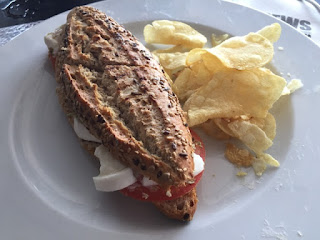 And guess what? It was raining when we came out so spent the afternoon back in the apartment, crocheting. Clothes back on the back of the chairs, and the purple brolly up in the living area, all drying out. 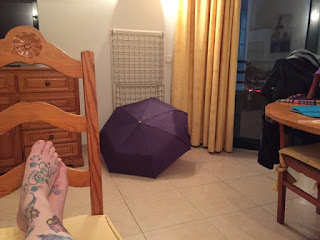 So, bearing in mind that we'd been soaked through numerous times and really didn't fancy it again, we decided that we would try the Italian restaurant across the road from the apartment for dinner. Surely we could handle a hop, skip & a jump across a single carriageway without getting too damp.

Brolly out of bag, I fought with it all the way down to the Marina, managing to keep my top half perfectly dry whilst my trousers were clung to my legs, sodden.
He just wore his North Face hat and braved it.

We found a nice Italian, and for an hour or so forgot about the miserable weather while we ate garlic bread, pasta & tiramisu..... washed down with plenty of wine, of course.

The pasta was amazing. Tagliatelle in a cheese sauce with crushed pistachio nuts. Never had anything like it, gorgeous. 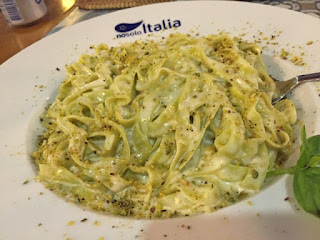 And guess what? We got totally drenched on the way back too!!
Apparently we should be thankful it's warm rain, said Hubster.