It was 6am and I awoke to a gentle howling, not an urgent bark or deep growl, just a sound that I took to mean.. "It's time to get up you guys, it must be 9.00am at least"

Hubster offered to go as he gets up at 6.30am anyway, and we had lost our little ginger guinea pig the night before and he needed buried.

A few minutes later I felt I should get up and say goodbye to Ginger Pig, so threw on a dressing gown and wandered downstairs.

"You might not want to come in here", Hubster warned.

But, of course, I did.  I got presented with a cage full of dog poop.   Someone had obviously had a bit of a dicky tummy in the night and couldn't wait for us to get up.   It is supposed to be unheard of for a puppy to mess in it's cage, but perhaps she had been howling for a while and we hadn't heard her.

My lovely cream painted walls were pebble dashed through the bars of the cage.  Hubster was right, I really didn't want to go in at all!  So I got my hat and boots on and took her out for an early morning walk instead and left him to it.

He did a fab job of cleaning it up, leaving me to sort out the bedding - which promptly went in a bin bag and into the outside bin.  No way was I washing that!

So, a new bed was needed, and I had just the thing.

I had changed all the cushion pads in my living room cushions, but not being one to throw possible craft materials away, I had popped them in the understairs cupboard.

Just old tatty fiberfill cushion pads.  I sewed two together  (three times) making sure I shook the pad right down to the sew line I then sewed another line to keep them tight against each other. 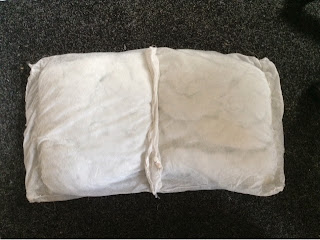 Then sewed them all together to make a pad of 6. 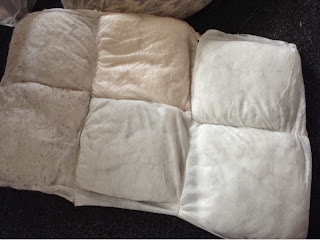 Then I found some fabric I had been given ages ago.  Thicker than a sheet, more like a curtain, but with a soft brushed flannelette feel.  It was the perfect size as it was to make a cover. 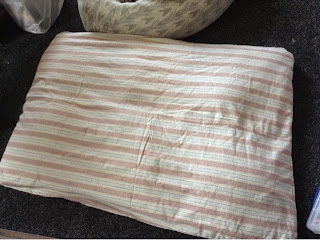 And the best thing is I can just chuck the whole thing in the washing machine  (unless it has poo on, then it is going in the bin!!) 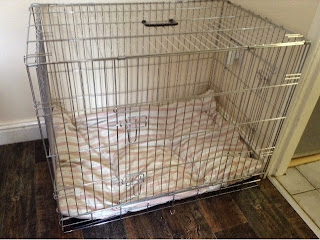