A couple of weeks ago Hubster and I had a week off, with nothing planned.  At the start of the week him and me went to Whitley Bay for a couple of days, but when walking along the sea-front we found we really, really missed our Ruby pup, (who was staying at home with  my daughter)

So, once back we decided we would go away again, just for one night, and find somewhere Ruby could come with us.

We were heading to the seaside again - Morecambe, we thought, but it was bank holiday weekend and most places were booked or not dog friendly.  In the end, a pub in Kielder Forest popped up on my Google search - The Black Cock Inn. 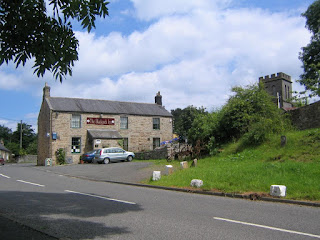 So we would head there.  Now, this wasn't a case of getting the dog to jump in the car and off we go, Ruby is very travel sick - like, very!

We had a lining of an unused guinea pig cage which we filled with towels and put on the back seat of the car, then cajoled her in.  THREE times we had to stop on our journey of 1.5 hours to clean up the puke.  (Well, Hubster cleaned it up, I walked the dog around to settle her stomach - I think I got the best deal!)

The last few miles of the journey to the pub was through the forest park itself, and very beautiful it is too. 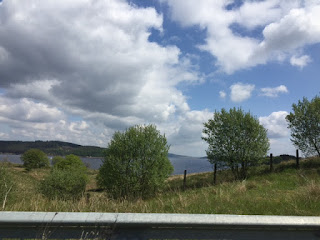 Past the reservoir and dam... 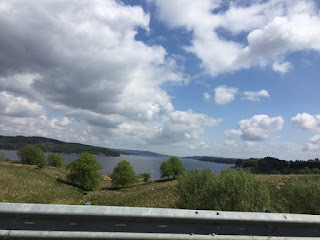 ... and onto the little village called Falstone where the pub was.
We booked in and got shown to our room.  Small, but nice and clean and comfortable. 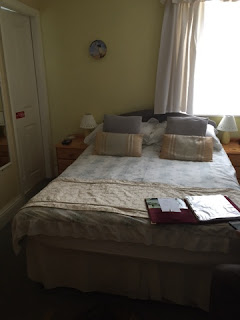 But the best thing was when we settled down for lunch they had a doggy menu.  What a genius idea! 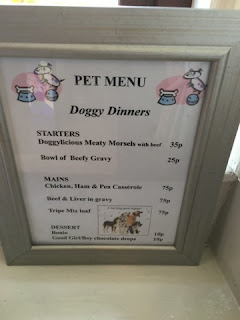 We had taken Ruby's own food of course, but we thought she deserved a treat as she had been quite traumatised with the journey, so she had a big bowl of delicious food, which she enjoyed, as you can see.

We had a snack as we were planning dinner that evening. 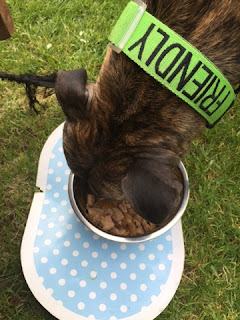 To earn our dinner (and my plan to have a good amount of wine) we took a walk from Falstone to Kielder Dam, and across the Dam itself.

It was a good hike, through forest paths, then all of a sudden, at the top of a hill, the reservoir appeared.  Beautiful. 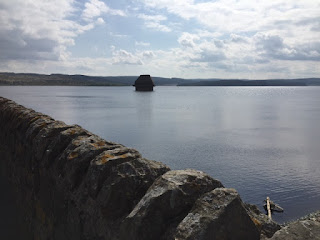 We walked across the dam, which is much longer than it looks. Ruby was superb, I kept her off the lead and made her "sit" when a car passed, it was great training for her and relatively safe as the cars are supposed to go really slowly when crossing the dam. 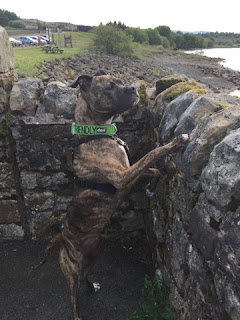 After a brief stop and a photo taking session, it was time to head back over.  This is the dam from the far side. 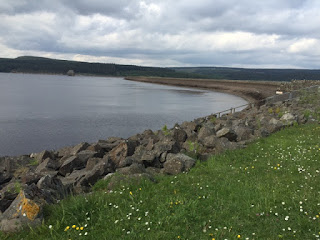 Time to head back to the village and pub, the wine was calling. 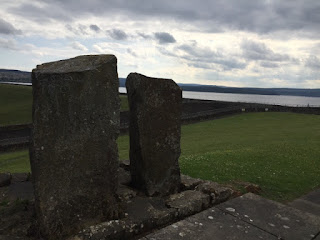 Back down through the forest... 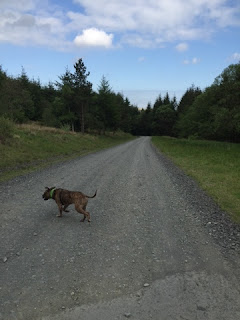 Hubsters FitBit app showed we have walked 4.3 miles. Not too bad for an afternoon stroll.  It doesn't look that far on this screen..... 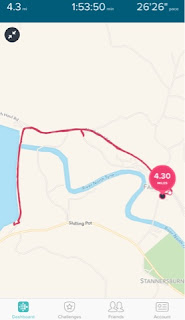 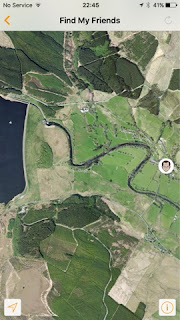 Anyway, time for dinner.  Vegetarians look away as Hubster is a carnivore, and he enjoyed a gammon steak  (Ruby enjoyed bits of it too - she wouldn't eat her own dinner as she realised that something nicer came out of the kitchen in this place!  Not daft are they?) 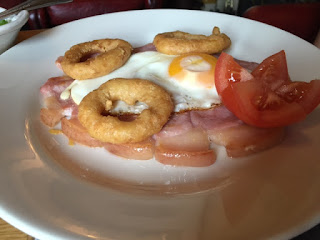 I had a Filo Pie with goats cheese, mushroom, spinach and redcurrant jelly in it. Most delicious. 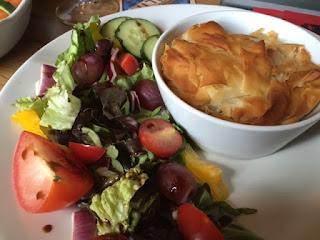 Then Ruby went for a play in the garden with "Zak" while I topped up my wine level and Hubster threw tennis balls for the next hour.

Ruby doesn't usually bring back things we throw for her, but after observing Zak for a while she started to bring back the ball and drop it at Hubsters feet.   Clever girl! 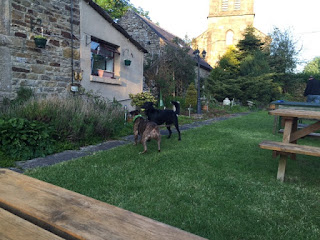 We did another small stroll after dinner, but the midges were out and biting quite hard. So we weren't out too long.  Long enough to find a kid's play park with a zip wire though, so we had a few goes on that - at 11.00pm at night.

We slept very well. Ruby slept very well too, considering she has never shared a bedroom with us, she settled down on the floor on her bed and snored all night.  We did expect to have to keep pushing her off the bed, but she didn't even try to get up.  She might have been too shattered after her walks.

Breakfast was delicious, but Ruby was tied up in the bar (not allowed in the breakfast room) and I was concerned about leaving her too long, even though she could hear us, so we ate and run. 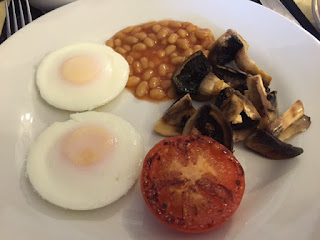 We decided we were going to walk until Ruby was so tired that she would be too tired to puke on the journey back.  And that's what we did.  All morning we drove a few miles, then got out and walked for an hour (as that was what the ticket on each car park was)

The views around Kielder are amazing, and surprisingly it wasn't busy at all, considering it was a bank holiday. 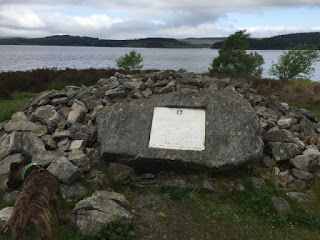 We walked through woods, through forests..... 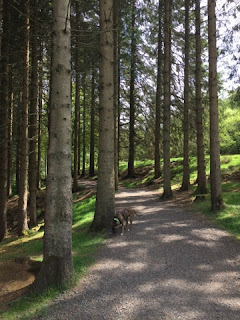 .. around the lakeside paths... 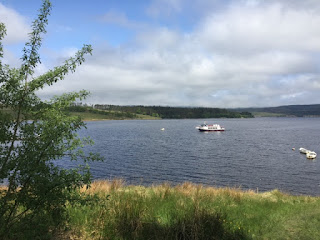 and collected fir/pine cones for a project I have in mind. 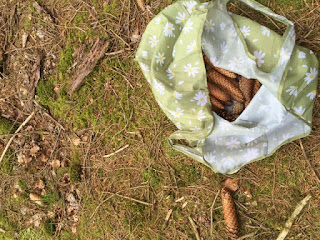 We then stopped for a late lunch at a pub called The Anglers Arms right at the far end of the lake. 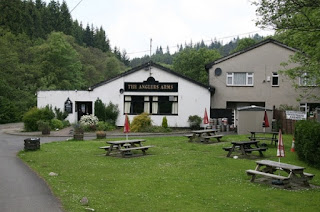 They served a lovely nut roast topped with goats cheese. 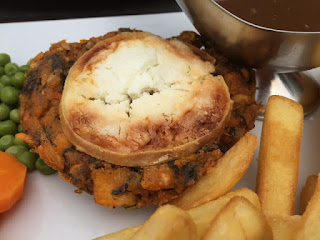 He had a burger. 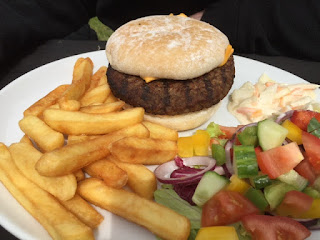 Then we felt guilty for eating it, so had another hours walk before setting off for home.

We were right though, Ruby was too tired to get wound up and puke, she slept all the way home!