A supersized Rubber Duck.... made from felt!

A friend and colleague from work was leaving to go back to her home town after Uni and I wanted to send her on her way with a little gift.

I knew she collected Rubber Ducks so I had it in my head to make a rubber duck, of sorts, from a bag full of felt she had previously donated to my craft stash.

But could I find a pattern?   Could I heck as like.  Well, not a free one anyway, and I am a bit tight to go paying for things that with a bit of thought and planning I could manage myself.

So, with that in mind I dug out a proper vintage, think 1970's, soft toy book which had a puddle duck pattern in it.  Not quite a rubber duck, this duck was longer necked, with a slender body and feathery wings.  And it was about 4" big, so it would need some heavy adaptation.

With an A3 graph paper pad and a pencil I got to work, using the basic duck format, shortening the neck and the body and completely changing the wings, beak and feet.   I ended up with this fellow.... 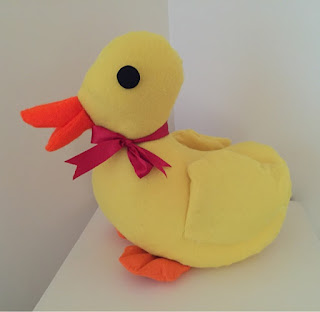 Which I have to say I was pretty pleased with. I mean he looks duckish doesn't he?

With those beady  (buttons actually) black eyes and squishy beak. 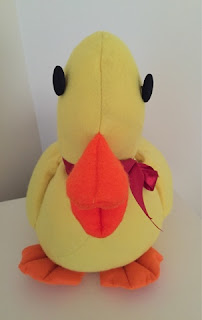 And rather dapper in his shiny red neck bow too. 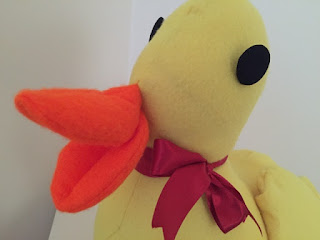 As mentioned I changed the feet quite a lot as I had changed the shape of the body, so these feet needed to stop the duck being a rocking duck by stabilising him. 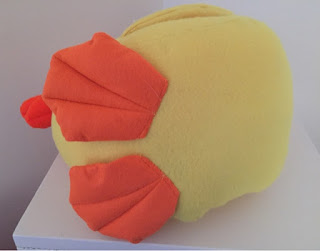 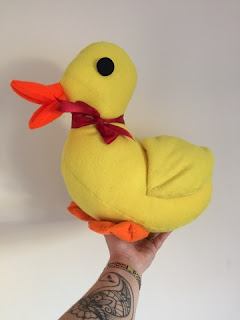 She called him Charlie.
Posted by Unknown at 15:00