I wanted to show you my doll - Amelia. 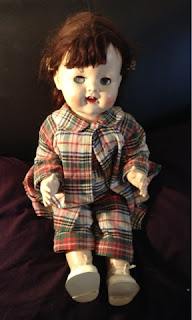 She has been in my life for as long as I can remember, but its only recently that she became 'mine'.

I've often told my mother, "if anything happens to you, I want that doll" (cheery bunch we are in my family!). So she decided to give her to me before that time came.

Amelia always sat in my mothers bedroom, on the dressing table. She has always worn the same clothes, but she had a new addition of 'hair clips' about 35 years ago. The hair clips are actually clip-on costume jewellery earrings. 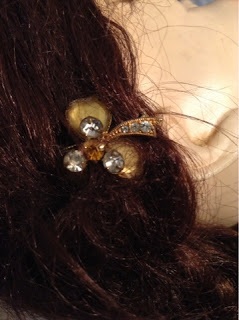 She has only just been given a name in the last few weeks, when I took her to my home - I thought after 50 odd years, she deserved a name.

My mother bought her for her younger sister one Christmas (her sister is 10 yrs younger) but unbeknown to her, my gran had already bought her a doll, so Mum put her doll away and that was that.

The clothes Amelia wears were made by my Mum. Pretty tartan dungarees and a long jacket - the material has softened so much of the years, you're almost scared to touch it.

Once upon a time she also used to say "mama", when you tipped her up. She doesn't anymore, but you can still hear the mechanism when you turn her upside down.

Her eyes also close when you lay her own.

I wish I knew more about this doll, there doesn't seem to be any marks on her except 'Made In England' on her neck & shoes. Her face seems to be made from a hard plastic, almost ceramic like, but not quite. I imagine it would shatter if she was to be dropped. 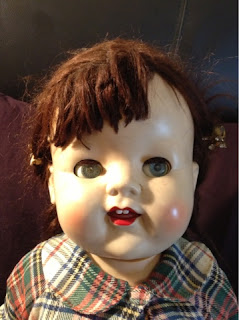 Now, Amelia is sitting in my bedroom, one day I might pass her on to my Grandchildren - she'll be a good old age by then!

Email ThisBlogThis!Share to TwitterShare to FacebookShare to Pinterest
Labels: treasure