On Saturday evening we decided we would see if we could get Ruby to Talkin Tarn, a local beauty spot where Dotty used to love to go.  It's only about 10 miles from home and we got there ok, but accompanied by big piles of puppy puke, still she had a lovely run about, even dipped her paws in the Tarn before coming home again accompanied by more puppy puke. 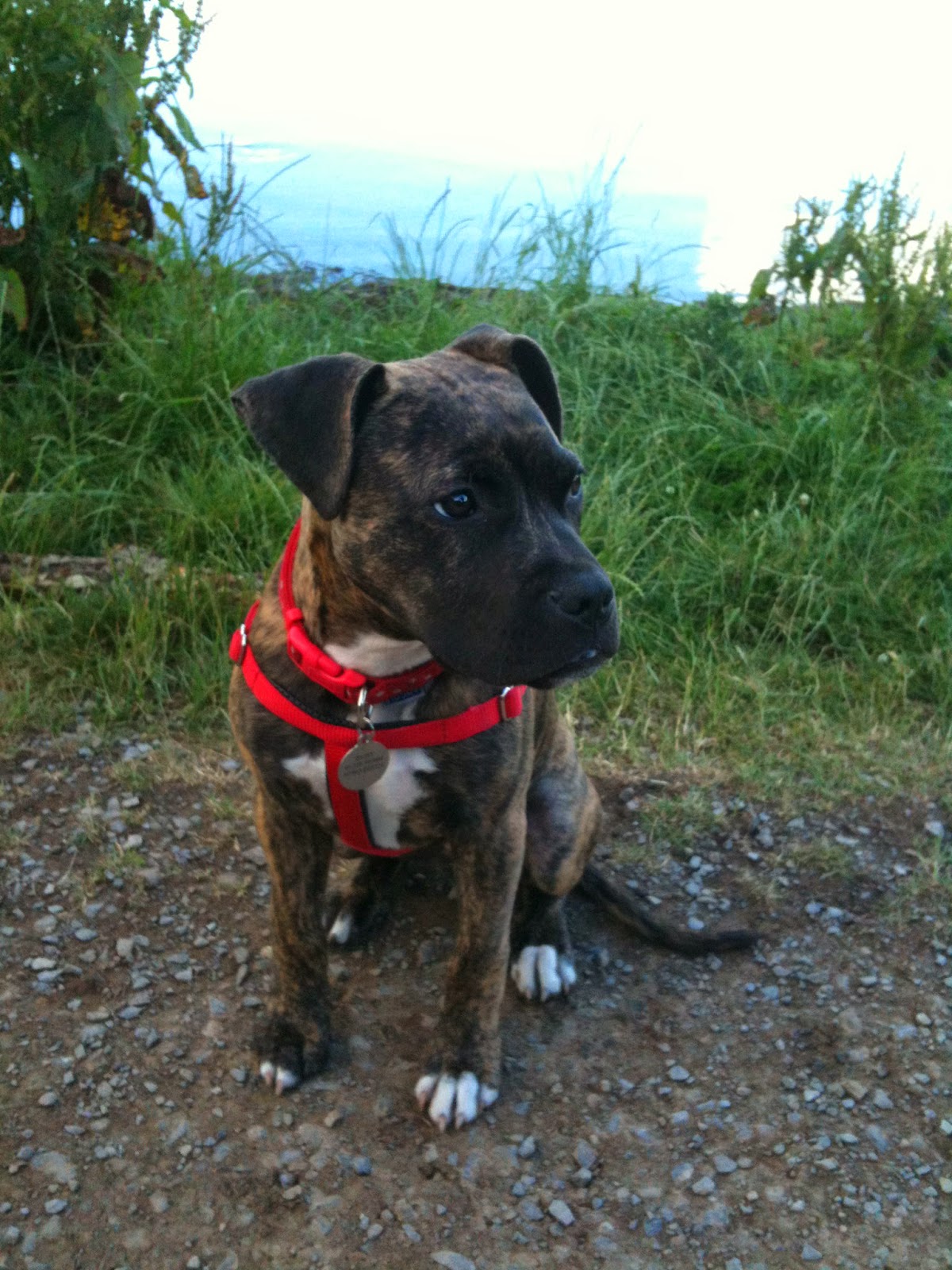 So, on Sunday we thought it best to stay closer to home and took her for a walk around Kingmoor Woods, another of Dotty's favourite haunts.

The plan was to walk her through the woods, which leads out onto the industrial estate that is home to Hobbycraft, were she would go and see hello to my old work buddies, have a coffee at MacDonalds  (as Hubster had some free coffee vouchers) then wander back home again.

We set of from home in nice bright sunshine. Hubster decided to turn back to get his sunglasses, I could still see my front door and him yelling from it, but couldn't hear what he was saying - then it struck me, it was pouring down where he was standing, and blazing sun where I was and we were only a few doors away from each other!   Of course the rain hit me, but we decided it was just a summer shower and we carried on.

A few minutes later it was persisting down, and we had to take shelter under a tree in someone's garden.  Ruby was steadfastly refusing to move.  Just look at those clouds! 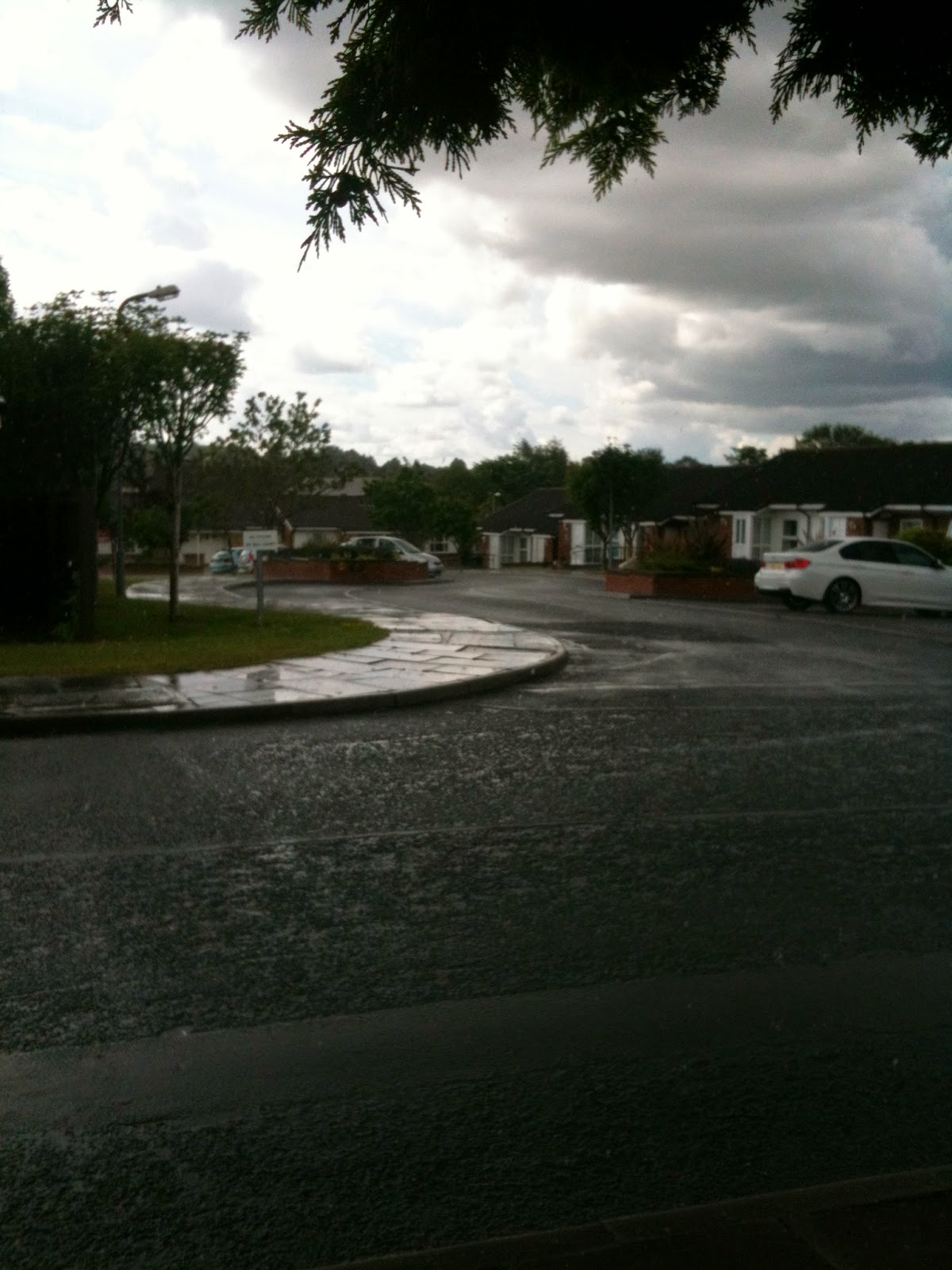 Ten minutes on and the rain had dried up, so we continued on our way, we were only yards off the entrance to the woods at this point, and of course, it was nice and sheltered in there. 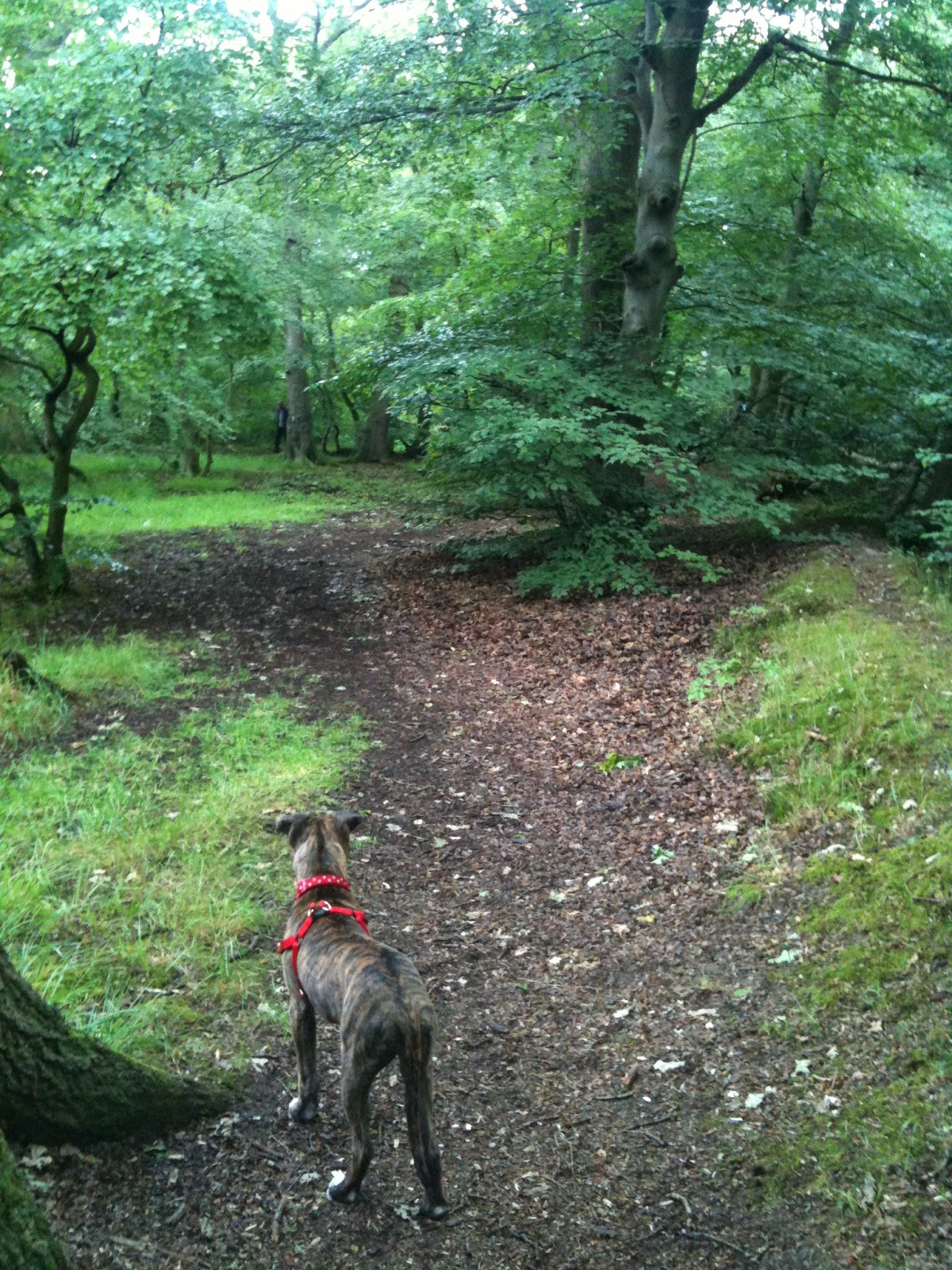 The rain stayed off as we walked through the industrial estate and reached Hobbycraft, where Ruby got a big fuss and a few cuddles, but then the rain started again so we decided to abandon our free coffee (as we would have had to sit outside) and try to get back to the shelter of the woods.

Ruby wasn't having it at all, 4 paws firmly planted on the floor and a cast iron will that stopped her moving an inch.  So Hubster had to carry her - all 12.7 kilos of solid puppy, all the way through the estate and back to the woods.  She was heavy.... apparently.....  I carried the lead  ;) 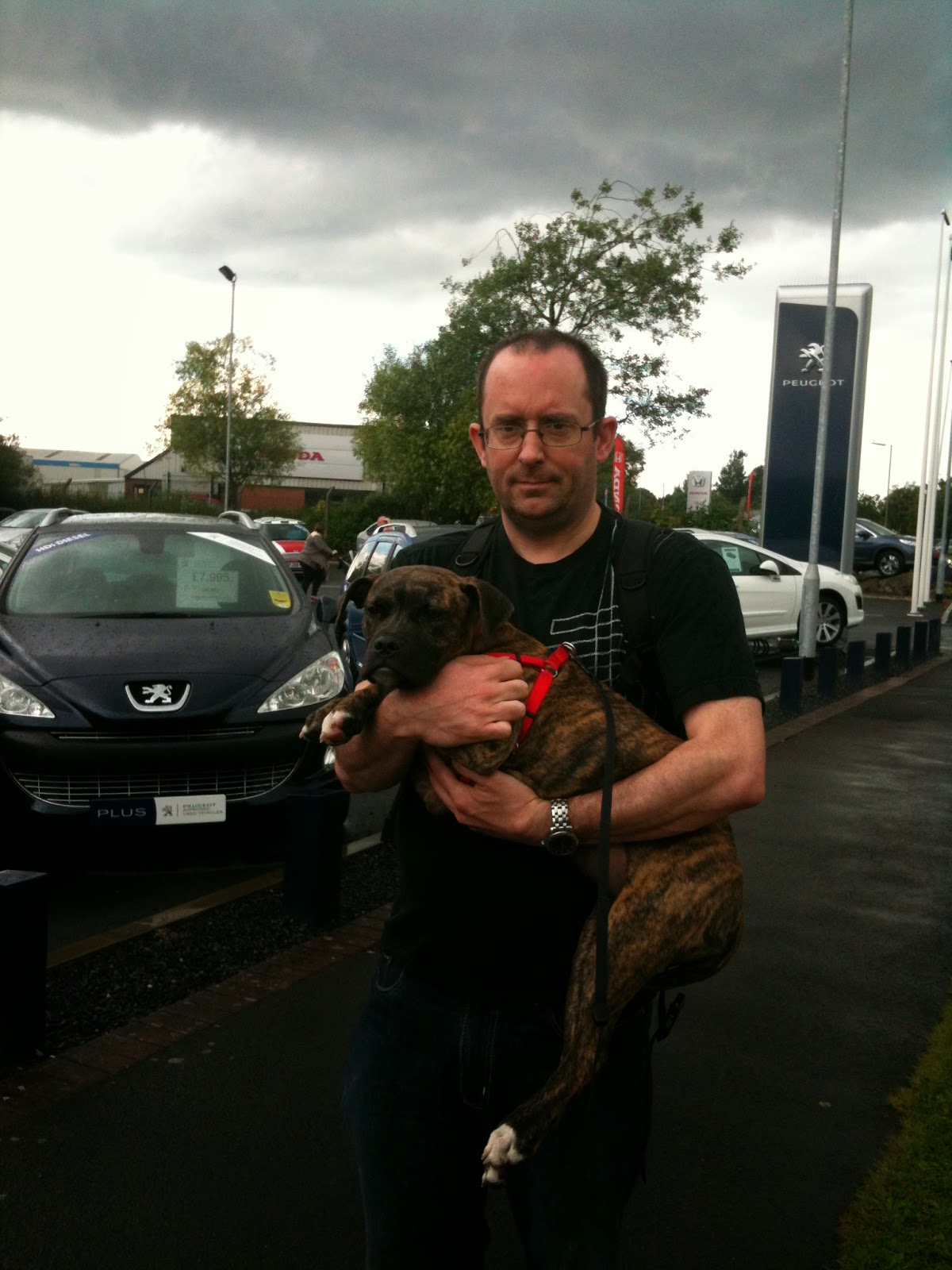 Again, under the canopy of the trees and sheltered from the big scary raindrops, she was happy to trot about on her own, but once we reached the exit of the woods that led into the housing estate, her feet were stuck like glue to the floor.  Would she move?  No, she would not! 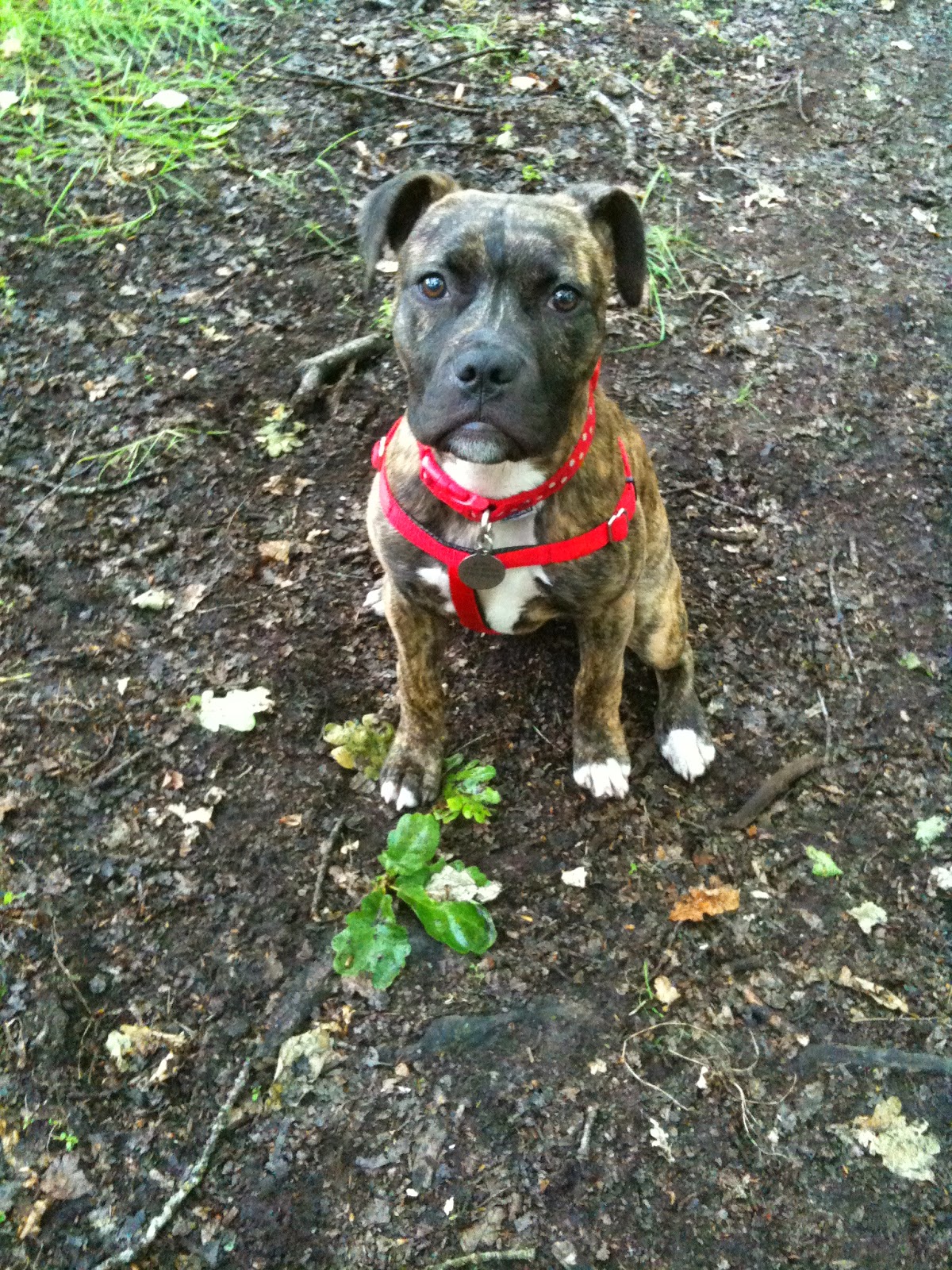 The decision was made for Hubster to make a mad dash, through the rain, through the housing estate and back home to pick up the car, so he could drive to the woods car park and pick her up.  Even tugging her along the car park was an ordeal!

Email ThisBlogThis!Share to TwitterShare to FacebookShare to Pinterest
Labels: days out, pets, Ruby