Father's Day was last month and I have the type of parents that have everything they really need and apart from wine (Daddy L that is) don't really hanker for anything.  So when Birthdays, Christmas's and other special days come along it is often a struggle to figure out what to get them.

Recently though, I have found that "experiences" seem to be worth more than a bottle of perfume, or a garden ornament, or a box of wine..... actually, maybe not the wine!

So, as Father's Day approached this year I found this... 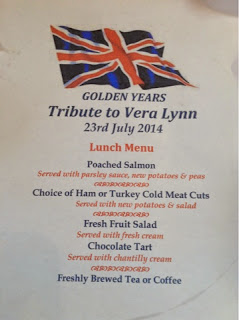 A Tribute to Vera Lynn by Lorrie Brown.
It was to be held at the Shap Wells Hotel, which incidentally was the same hotel that Hubster and I married in nearly 9 years ago.

The price of £12.95 included a two course lunch and the show.

It was a bit secret though, after picking them up Daddy L speculated on where it would be that we were going  ("Do I need my Camera?", "Are these shoes suitable?", "Am I dressed ok?" - IF YOU LIKE, YES, GET IN THE CAR!!)
All the way through the city he was trying to guess which venue we would be lunching at - as it was bound to include lunch as I had collected them, along with my sister, just after 11am.  When we approached the roundabout to leave the City, he guessed it might be a favourite Indian restaurant.  When we hit the M6 Motorway, he decided we were going to Penrith.  When we missed the Penrith turn-off, it must be Kendal.

He was wrong, it was Shap.

When we got to the hotel and the event was displayed on the welcome board, he seemed quite chuffed.

Then he had wine and seemed even chuffed-er.  ;) 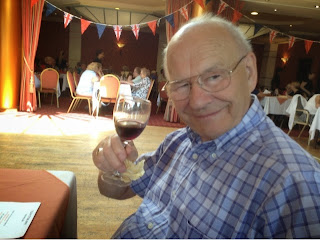 After lunch  (Salmon for them and cheese salad for me) and desert  (fresh fruit salad) the show started.   The "warm-up" act was Lorrie Brown's husband, Gary who did a (quite) cheesy, but equally funny comedy stand-up routine. 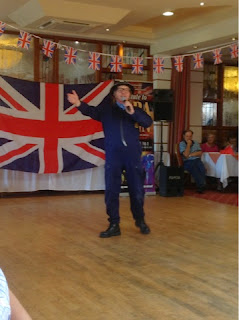 Then Lorrie came on and sang not only Vera Lynn songs, but other war-time entertainers songs too. 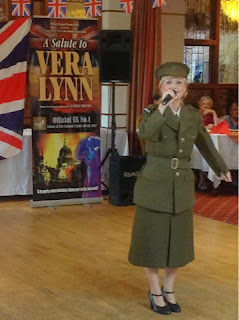 Daddy L sang so loud that he even got a stint on the microphone! 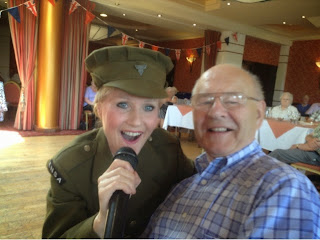 I knew some of the words to some of the songs as I remember my Nana, and of course my Dad, singing them when I was young.  But even though I didn't know them all it was a good afternoon and most enjoyable to watch loads of .....em.... older folk, having a great time. 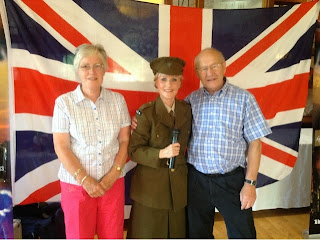 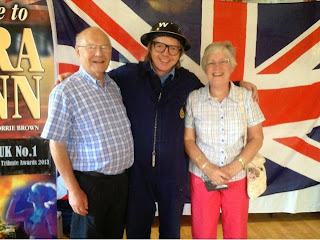 Lorrie is doing a "Doris Day" event in October.  Might book for that one too :) 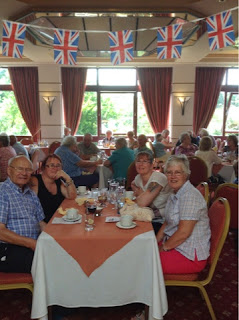 Email ThisBlogThis!Share to TwitterShare to FacebookShare to Pinterest
Labels: Daddy L, days out