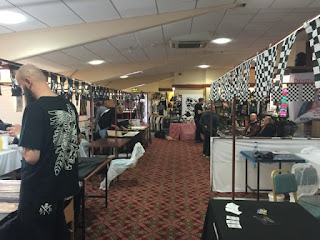 Every year I am a little bit envious when the North Lakes Tattoo Convention is on in Carlisle, this is because it is usually the same weekend as the Flame OFF, which is a convention for Glass Workers held in Uttoxeter, and we are usually away attending that show.

But this year it was on the weekend before.... so I just had to go didn't I?  Hubster isn't into tattoo - he obviously doesn't mind mine, or at least he says he doesn't!, but he is clear skinned all the way through.  So I went with more like-minded people  ;)

WAS NOT going to spend any money, after all the Flame Off was the following weekend.  WAS DEFINITELY NOT going to buy a tattoo.

So I watched as my sister Julie sat down for the most beautiful Peacock  (she wasn't going to have one either!).  I wanted it!

I hate feathers, but there is something about Peacock feathers that are quite stunning I think.  I just wish they didn't flap them about so much. 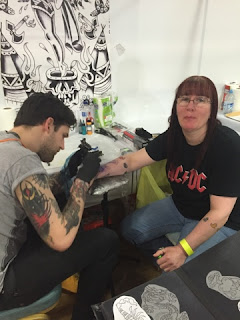 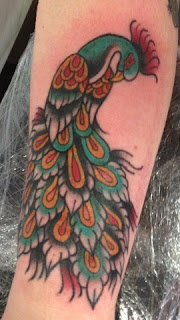 By now the buzz of the machines was calling, Shona and I were just wandering about looking at the amazing art work when I suddenly found myself leafing through Jason Corbetts design book.  Jason specialises in black work and dot work, and although all of my other tattoos (way too many to count) are very brightly colours, I felt drawn to his work.  After a chat about swirls and curls and paisley patterns, he agreed to tattoo me.  He free-handed a beautiful paisley dot work pattern on my arm, then got to work tattoing it on. 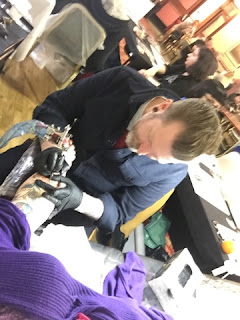 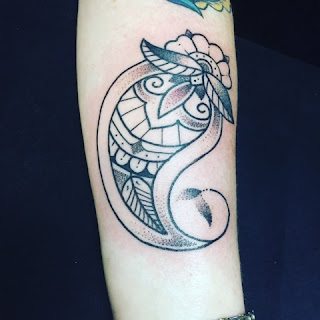 Poor Shona was abandoned as Julie and I got tattooed, but once we were finished we decided that she should have something too, it wasn't fair for us two to have one and not her was it?   We found a great artist called Rich Pearson who had a pretty butterfly design.  Before long all three of us had decided to have similar butterflies. 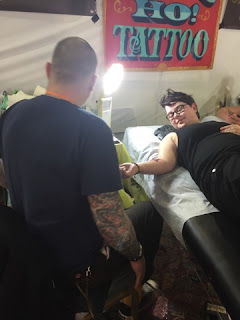 Shona asked for something "not too girly" and Rich suggested a traditionally coloured style, in black and red.   Not a colour she would have gone for and initially she dismissed the idea, then changed her mind and went for it.  I had planned purple and teal as my colours, but after seeing how fabulous her colours looked I changed my mind and went for those traditional colours too.
Julie stuck with purple  :) 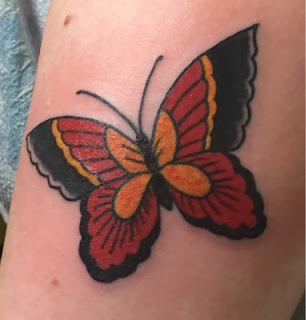 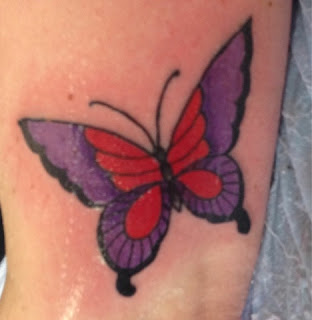 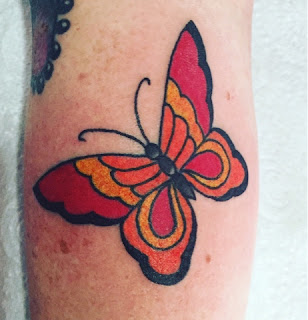 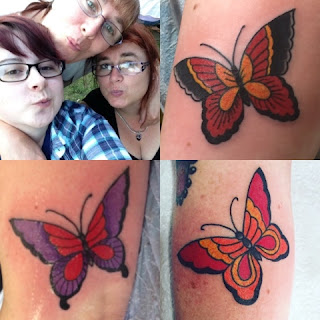 Now hang on, that's two tattoos for Julie, two for me, once for Shona.... she needed another  ;)  We are SUCH bad influences.
I should say at this point, that Shona was already tattooed, in fact her number is twelve right now, so it wasn't a totally inappropriate suggestion, although her Granddad would say different. 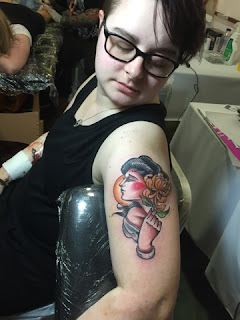 She chose this gorgeous lady from Alex Bage, she had to wait a while to get a slot, but so worth it. 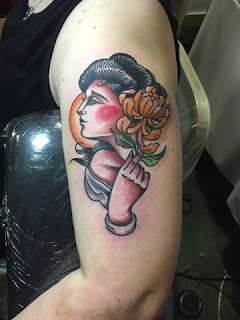 As well as tattoo artists there was stuff for sale, clothes, bags, jewellery etc....  I found a cute little stall to buy the other little girls in my life a little gift.  A fabulous unicorn dress for Hope. 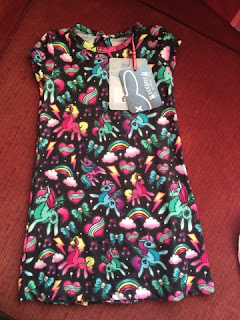 And a tattoo design jacket for Ellie. 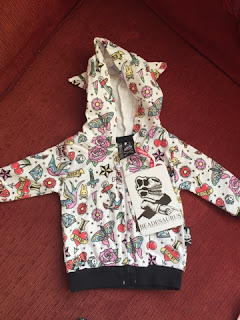 There is a tattoo convention in Blackpool in August.  I think we might be visiting  ;)
Posted by Unknown at 10:30

Email ThisBlogThis!Share to TwitterShare to FacebookShare to Pinterest
Labels: days out, tattoo