Most of us have one don't we?  That dreaded under-stairs cupboard.  I have two in fact, one is in the kitchen and is full of carrier bags to be recycled, a washing machine and various tubs of animal food - along with shelves full of stuff like the iron (hardly used), the hairdryer (hardly used), the sandwich toaster (barely ever used), the box of light bulbs  (how on earth do people manage to accrue so many?)..... I could go on.

Then there is the 2nd understairs cupboard, the one where everything that has no home gets chucked.

"Where should I put this?"  Shouts a person holding up some random object, like an old dog towel or a bin bag of old sacking.   "Emmmmmm,  (thinking hard), no idea, shove it under the stairs"

And THAT'S how it works.

Then, someone comes along and mentions something that you KNOW is in that blooming cupboard, and before you know it you open your big gob and say - "I've got some of that you can have, come round and pick it up, it's only under the stairs."

That is exactly what happened, followed by 2 hours of tidying out the under-stairs cupboard in order to reach the promised item.

Out it all comes, bin bags of wool, bin bags of material, bottles of home-made wine patiently waiting for a year to pass so it will be gluggable. 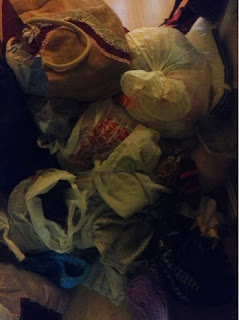 I'd just mopped that floor too!  What was I thinking? 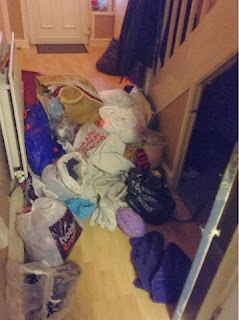 Hoping that no one calls round for a brew while I am half way through this mess. 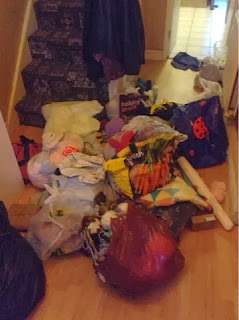 Well, would you look at that!  My rollerblades.  Yep, they are mine and yep, I have used them in the last few years.  It was an attempt to keep fit at 40.  Hubster got himself a pair too and we pulled them on and skated down Silloth sea-front. (far enough away from home not to be recognised.... or so we thought.  I wore a full face scarf and pull down woolly hat just to make sure.  They have been in that cupboard now, undisturbed, for about 5 years now. 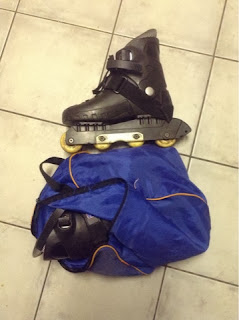 And this... an old Olympia Spendid 66.  I wrote a novel on this machine, many moons ago.  I did my RSA in typing back in Secondary School  (1984 ish) but can I type on it now?  No I cannot!  How did anyone get their fingers to push those keys all that way down?   It is currently under offer to a typewriter collector, seems a shame it sitting unloved, under the stairs when someone might treasure it. 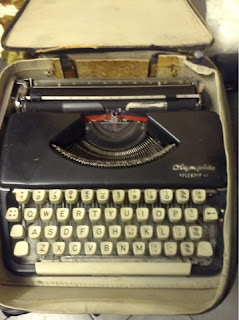 Yarn....balls and balls, and balls and balls of the stuff.   Balls still in their original bags, straight from the shop, with the receipt dated a year ago!  I hang my head in shame. 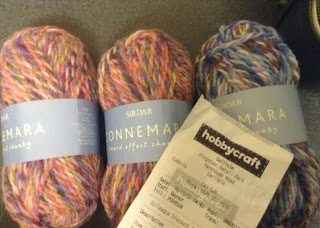 Hubster thought it was funny to stick a ball of wool in a box with a 'tail' hanging out and shout "I've found a mouse" - absolutely hilarious.... I nearly weed.  Not! 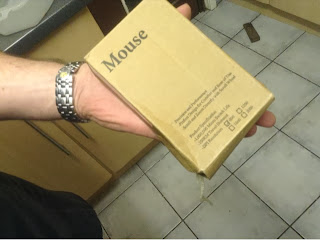 So as punishment I made him sort one of the many wool bags.  It took him quite some time. 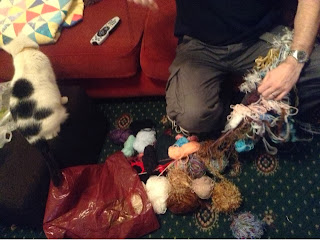 It's all getting sorted into piles now.  Or is it that I am just moving stuff around, trying to look busy so I don't have to help him sorting out that wool bag?  Either/Or. 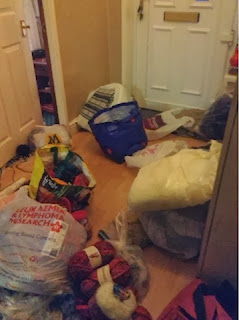 Yey, hats.  Crocheted hats from ages ago.  I'm gonna give them a freshen up then take them to sell at Hobbycraft over the Children In Need weekend, with profits going to the charitee of course. 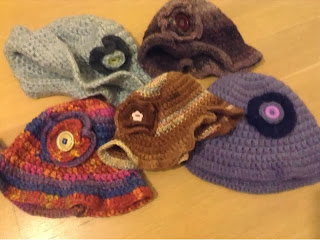 Then I found this, how sad, an unfinished blanket that had great potential. 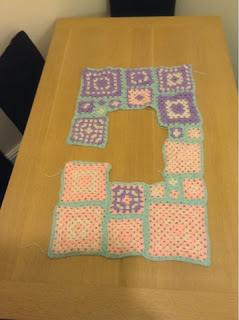 But as I no longer have any of that yarn, I was very strict with myself and chucked it out!  (plus it smelled a bit funny) 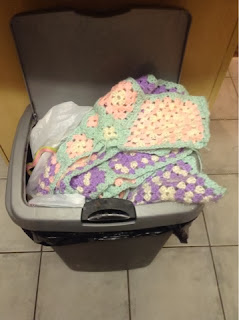 Getting there.   Three large bags of wool  (you know those charity bags you get through the door? - those)  They are having to go back under the stairs as there is just not enough room in the craft room for them. 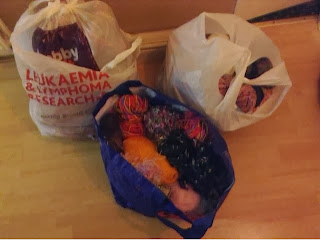 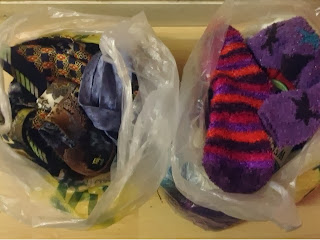 Bags and bags of fabric.  Felted jumpers (for a project) many colours of velvet left over from a rag-rug and a bag of rainbow coloured t-shirts to do something rainbowy with. 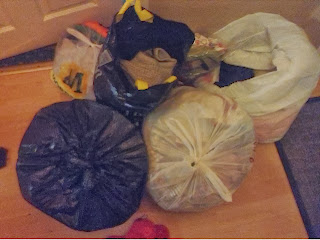 AND...... ta-dah... the bits that I went in for in the first place.  Some sacking and some rags, for someone to make a rag rug. 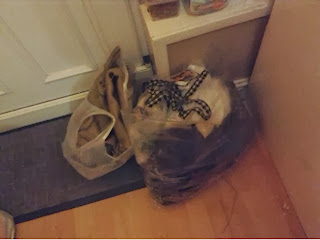 Once I get it totally empty (it may take some time) I might transform it into a little home for Dotty Dog.