The weather was a bit grumpy today, grey clouds formed overhead and the rain drops threatened to plop down on our sun-hatted heads.

So, what to do today then? I've got loads of things left to tick off on my 'must see' list, so we go through & see which ones are better for a grumpy grey cloudy day.

We start with the Mosta Dome.

We jumped on the bus with our bargain €12 weekly ticket and quickly arrived in Mosta. You can't miss the church, it's the 4th largest unsupported dome in the world and it's huge!  You can see it from miles away,

There are certain visiting hours 9.45-11.45am and then 3-5pm. We arrived at 11.15 to find a service happening, you're not allowed to tour round when a service is ongoing - for obvious reasons. So we waited. The worshippers all started to leave at around 11.30pm and there was hundreds of them, it took 8 minutes for them to file out of three doors there was that many.

I would have loved more time, but one by one the lights were being turned off & we were turfed out.

Missed seeing the replica of the WW2 bomb that pierced the dome & failed to explode though, which was a shame.  But here is a photo of the inside of the dome. 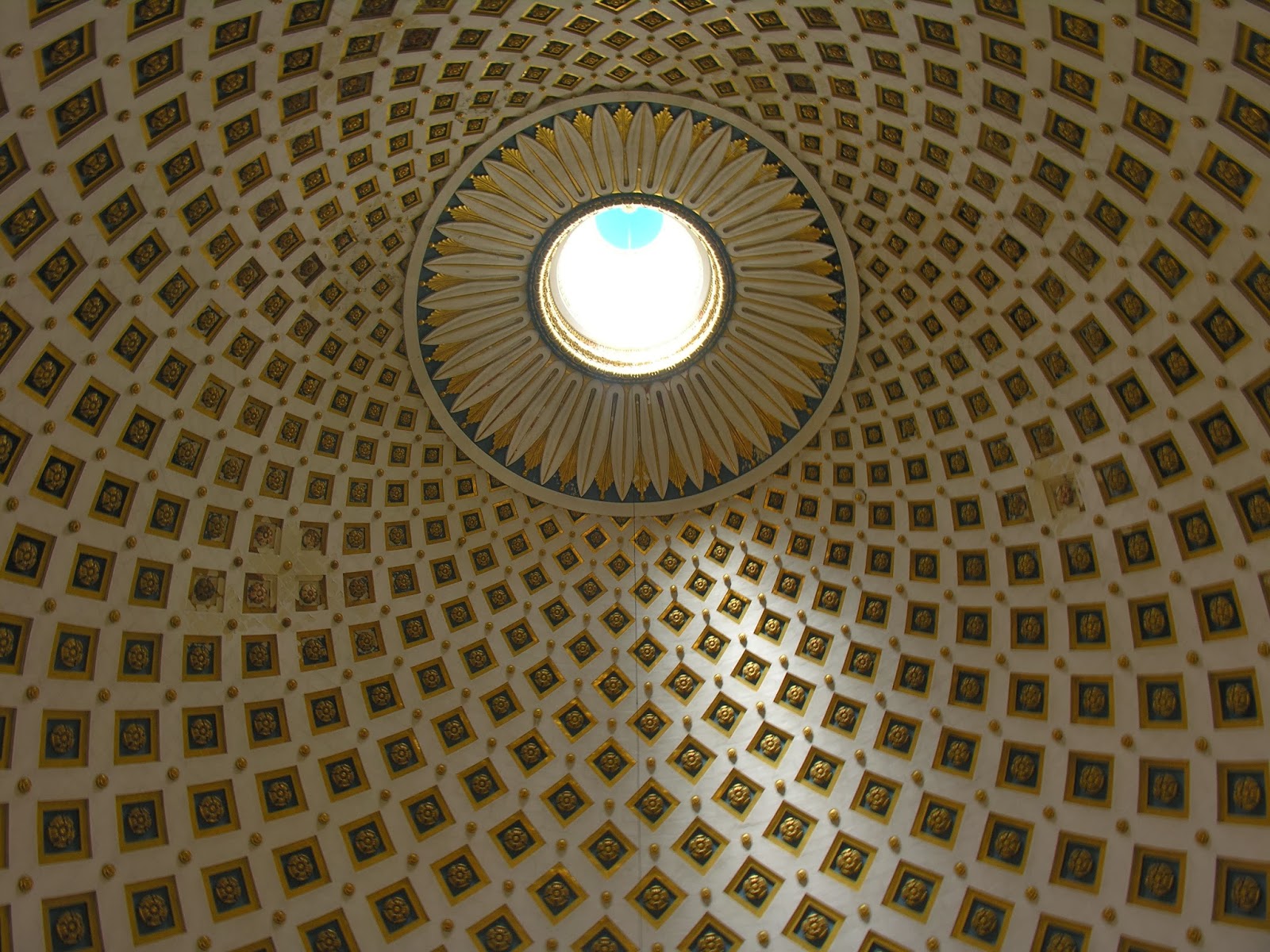 When leaving the church I spotted a Pastizzeria (pasty shop) and trying one of the 'pea cakes' was also on my list. 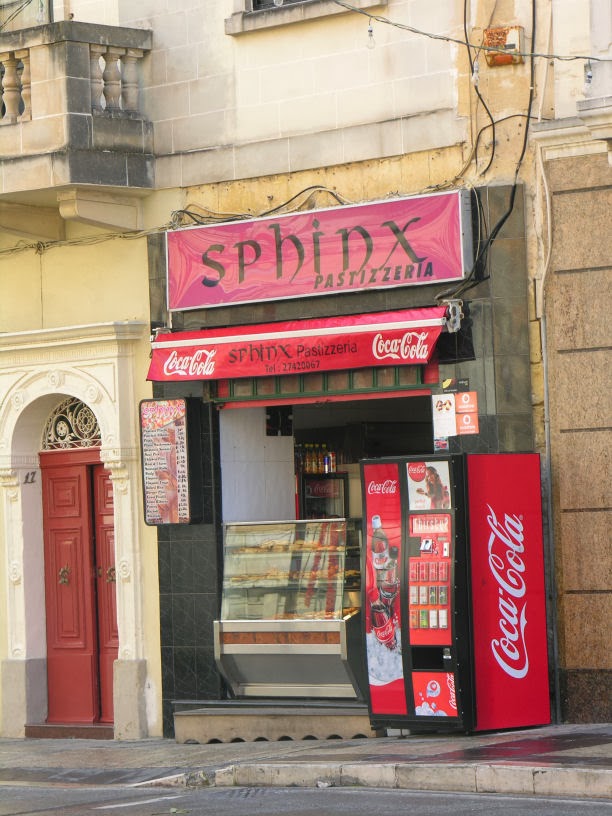 They didn't look that big in the booth! 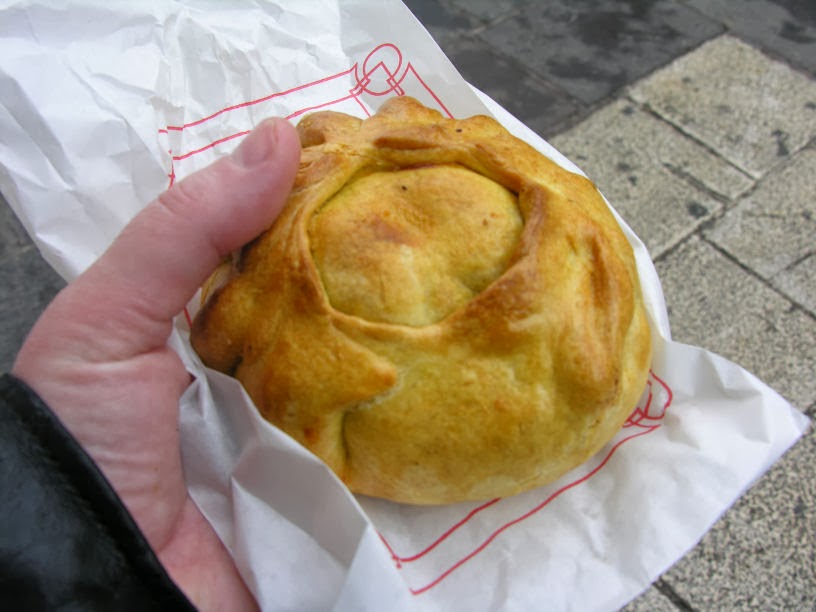 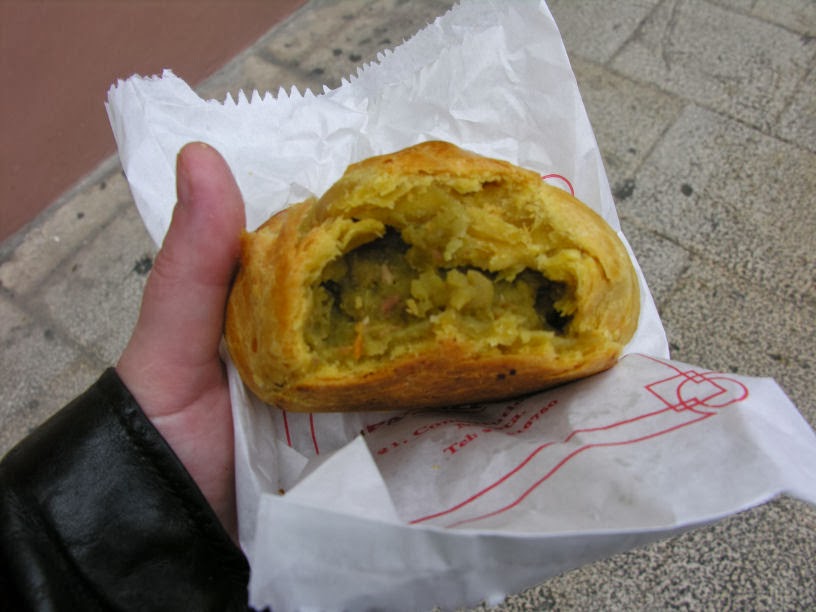 The weather had lifted a little by now so we decided to travel on the The Blue Grotto. As the bus was Sunday service there was a bit of a wait & I needed a pee (as you do when you've drunk 2 brews & 2 orange juices for breakfast, so we decided to head back to the bus station at Bugibba where I was sure there was a public toilet...... I was wrong, and Hubster started doing that "quick, quick, this is our bus" thing and in a mini panic I jumped on before asking how long we would be on this bus. EIGHTY EIGHT MINUTES!!! What???

Yep, 88 minutes of me whining like a 6 year old coz I needed a wee.

88 minutes later we arrived at the Airport to change buses & I ran in like the sprightly, fat, forty-odd year old that I am. Blissful.

It was going to be an hours wait if we missed the connection, but luckily, even with wee stop, we made it. So onto The Blue Grotto we went.  The sun had broken through the clouds & was quite warming. 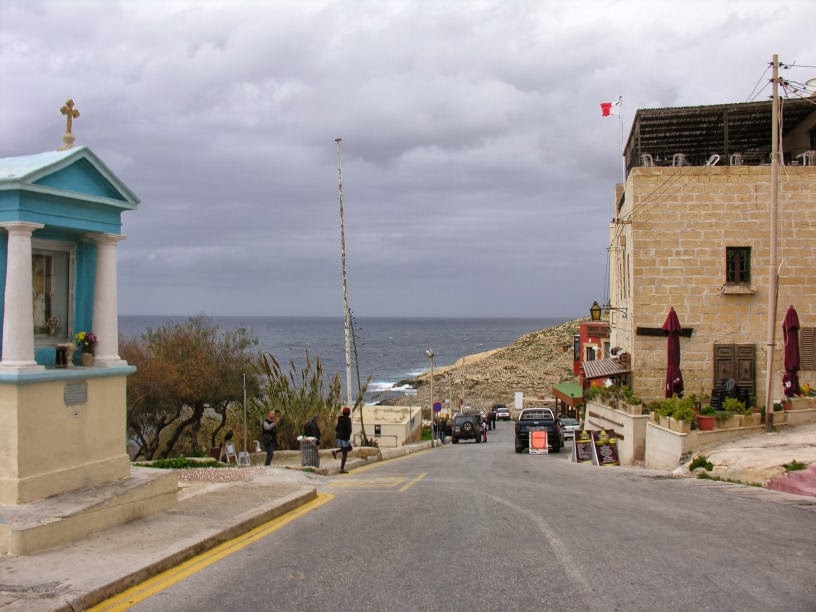 It was gorgeous scenery when we got there, the crashing foam against the rocks was a most unbelievable colour - imagine when your washing machine is going round and your new denim jeans have left a blue hue in the froth - that.

Alas though, when we went to buy a boat ticket to sail into the caves... 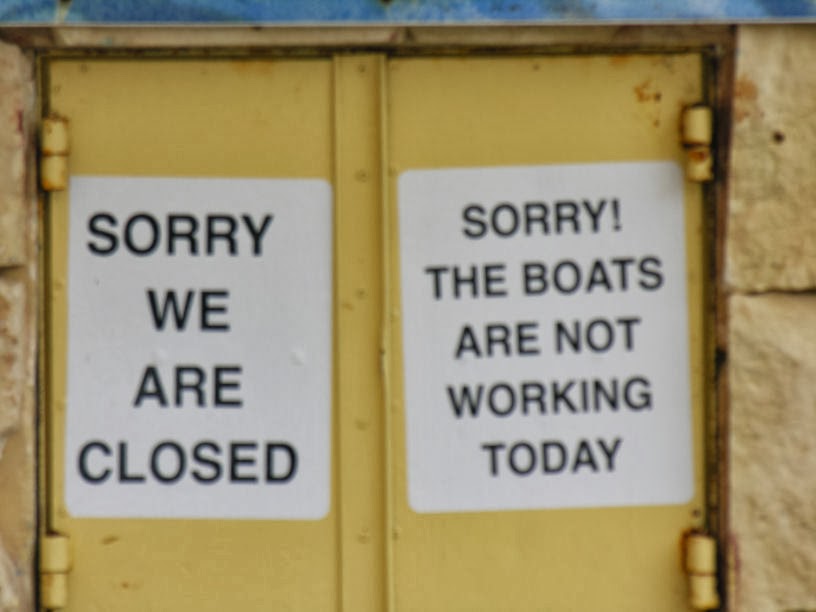 Instead we went and took a lot of photos of those beautiful waves...... 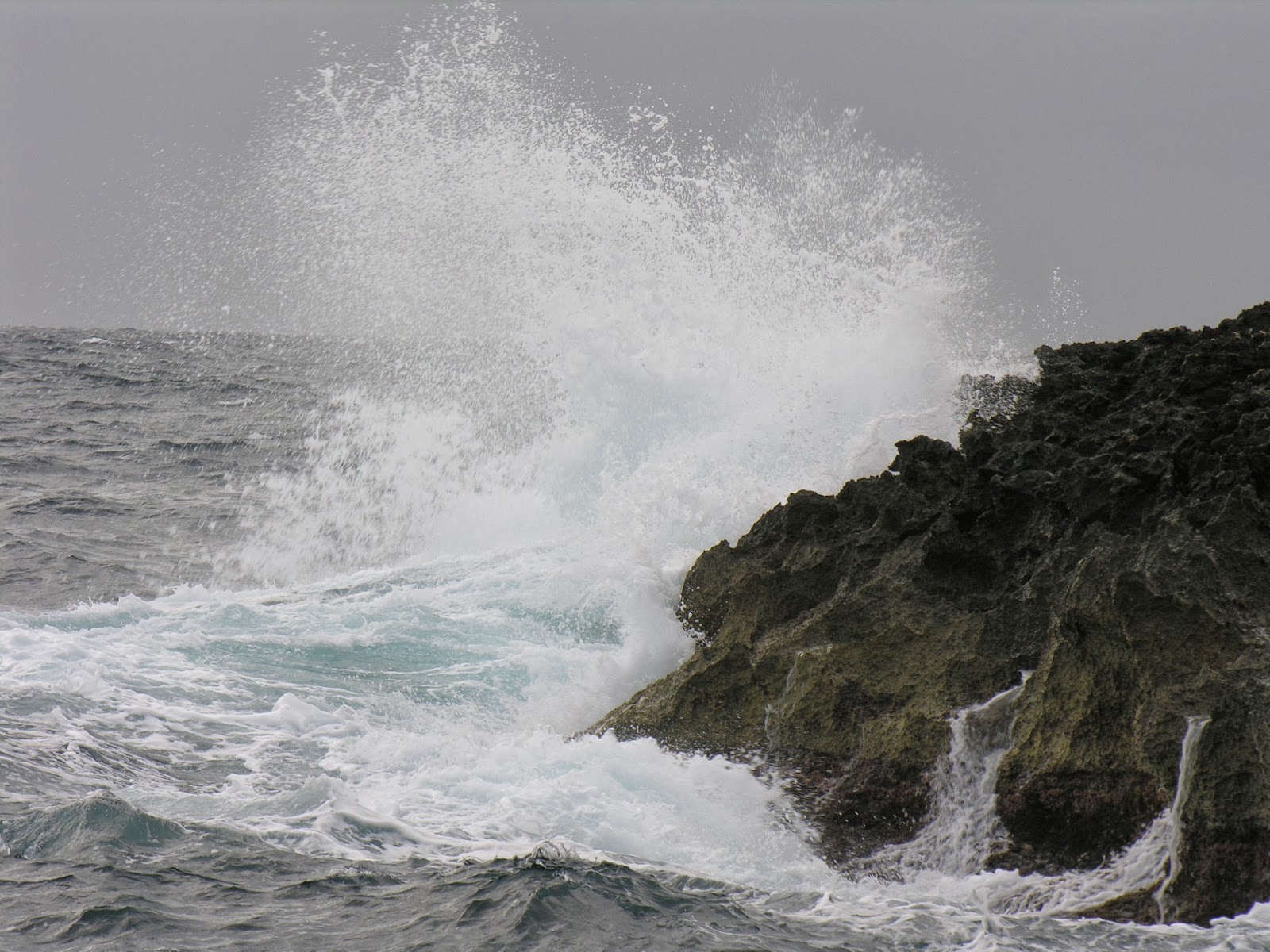 ...then sat in a restaurant when I had egg & chips. 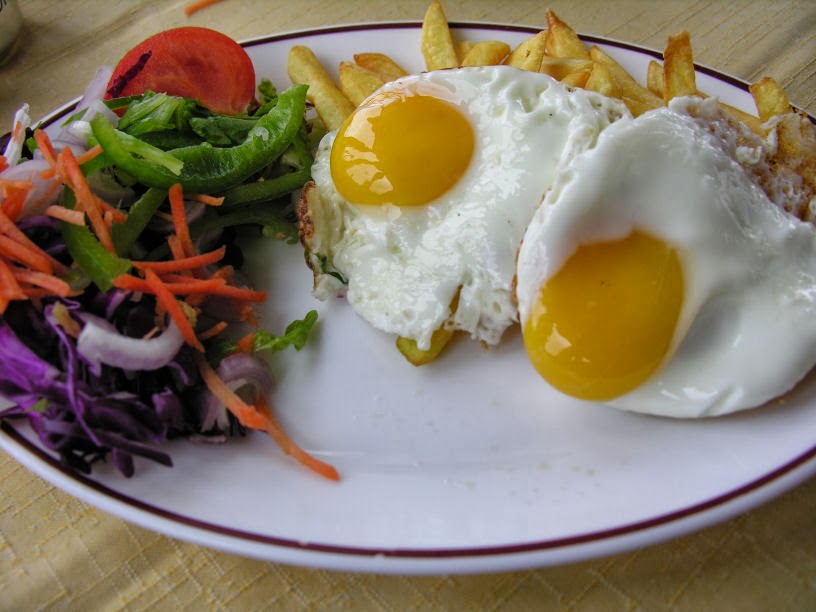 Actually I was a bit embarrassed to order this, it was so British, but I just couldn't face another pizza.

After our late lunch we were going to walk around the coastline, but once outside the wind was blowing so hard we could barely breath, so we caught the next bus back.

We didn't get many things ticked off our list today, but it's the winter season in Malta so everything closes early, plus the sun sets around 4.30pm so there's nothing much to see after that.

The weather forecast for tomorrow is not looking great :/