I am building  (read 'building' to mean delegating jobs and watching over them carefully) a new guinea pig cage.

Jason & Del were the dominant ones of each pair.  Jason died a couple of years ago and I tried to introduce David to the other two but they made his life a misery - little thugs they were!

This year Del died, which left me with two submissive pigs, and I really wanted them to get together to be comfort and companionship for each other.  But I put David in Rodney's cage and Rodney kicked off, then I put Rodney in David's cage and David kicked off.  Now, I know you are supposed to let them fight it out, within reason, but I couldn't bear it if anything nasty had happened, so I split them up again.

This is their outdoor area, one cage at the front (covered up) and there is one in the back too, they get to use that huge run every day, which is divided off - they can only sniff each other through the bars. 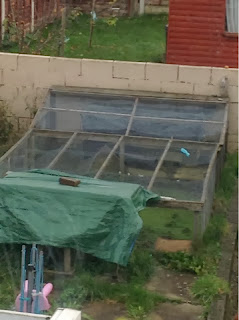 Every bonfire night we dig out the two, rather large, indoor cages and bring them inside until the fireworks are over, but this year I decided as the indoor cages don't really have an 'owner' as such I might be able to put them both in one together.  They had a couple of little spats, but then it all settled down and they were good cuddly friends.  Happy times  :) 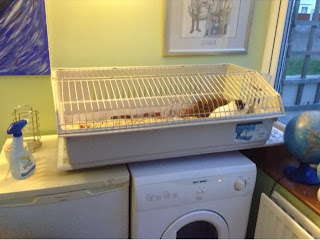 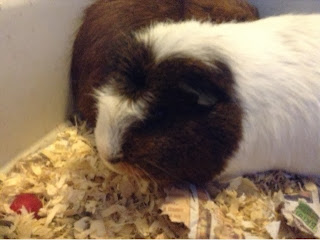 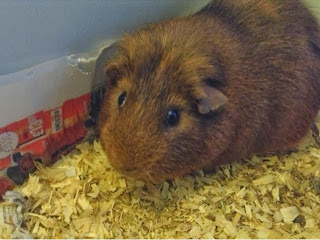 Now though, I don't want to put them back outside, I am enjoying the squeaks and the cuddles too much, so I think I will have them indoors for the winter.  It will also allow the grass in the run to grow and give them much fun in the spring.

So, I decided I would have a multi-level cage.  I looked at the cube system, and clever arse that I am (read that in a sarcastic manner) decided not to buy a 'ready to rock' system, but to shop around, get it cheaper and more DIY.

I bought two packs of Safco Wire Cubes.  I got two as I had a 10% voucher which I found online and free shipping. 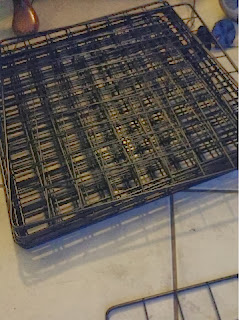 Then when my lovely boy Iain and his equally lovely fiancée Helena came for a brew, I set them to work  :)   (See, I delegate) 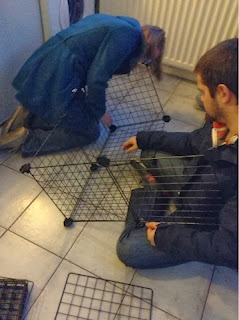 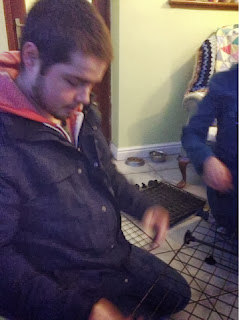 Frustration was the keyword for the day  ;) 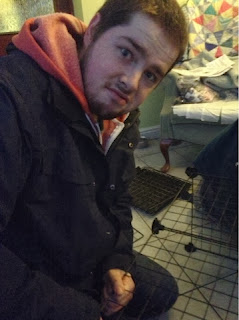 I originally planned to have it build with a 2 x 3 base, and a 2 x 1 attic on the stop, but quickly realised this was going to be way too big to sit on top of the appliances.  I could put it on the floor, but it's cold tiles and I wanted them to see out of the window  ;)

So Iain decided on this formation.  It has two levels and a swinging lid - clever chap he is. 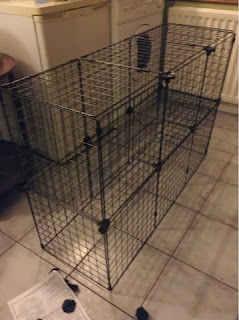 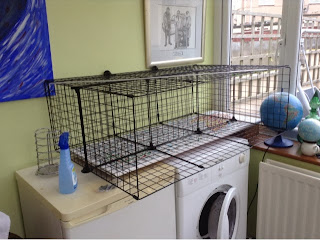 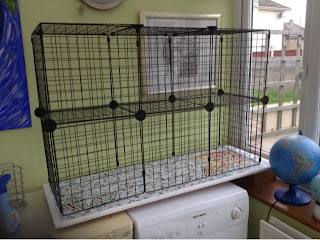 After looking at this formation for a few days I decided that it wasn't really sturdy enough, or roomy enough, and the decision was made to start again  (sorry Iain & Helena).   Hubster got the job of the rebuild  :)  (he's such a lucky guy).  So the original formation that I had deemed to be too big?  We went bigger! 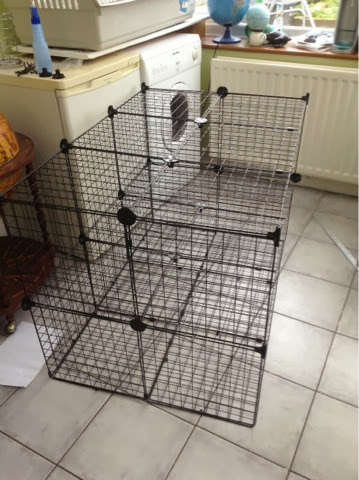 Next the flooring, this is 4mm Correx sheet which I ended up getting from eBay as it seemed to be the cheapest.  This is the stuff that sign-writers use for For Sale signs and such like, unfortunately it was very badly damaged when it arrived, something must have been chucked on it in the couriers van and it was un-usable.   The seller wasn't going to resend, just refund, but I kinda talked him into it, and he cut in in half and sent it flat this time.  It was still a bit bent, but usable this time.

Hubster got to work, measuring..... 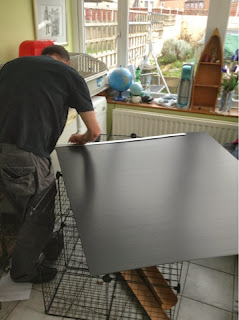 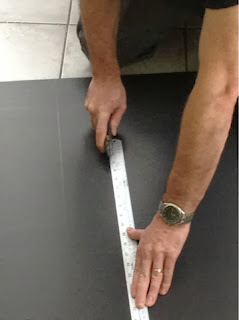 Then folding into a tray. 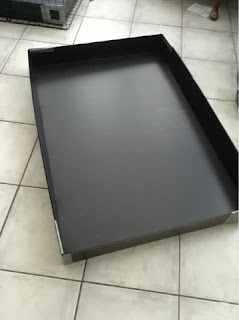 We Duct Taped the corners for stability - I should have got Gorilla tape, which is black, but forgot - I can re-tape it at a later date. 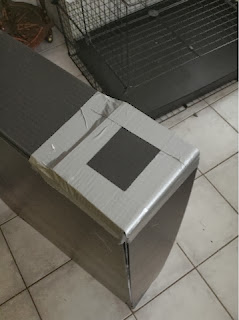 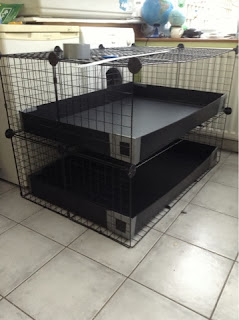 Now for a 'ladder' to get the piggies from one level to the other.  I found this tube in Pets At Home, which I thought would be ideal, but quickly worked out that when you look down into it, it looks like one of those really scary water slides at Wet & Wild and I was pretty sure they wouldn't be persuaded to take the plunge. 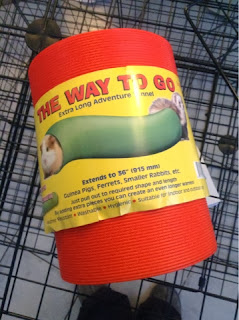 Again, back to the drawing board - also known as a quick phone call to Daddy L  :)
What a little diamond he is, within a few days I had a custom made to measure ladder. 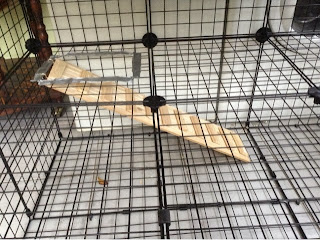 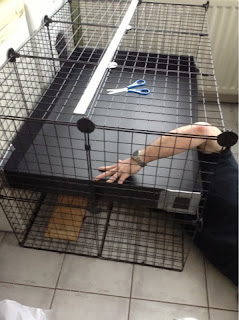 And up on the top of the dryer.

Now, we needed a bit of wood to go underneath as it overlaps a little.  A trip to B&Q found us a £10 sheet of chipboard that we only needed half of, so we found ourselves a chap in an orange t-shirt who found us an offcut, which he even cut to size, for just £2.00!  Propped up at the ends by two big thick computer text books so the pigs don't get the vibrations off the dryer. 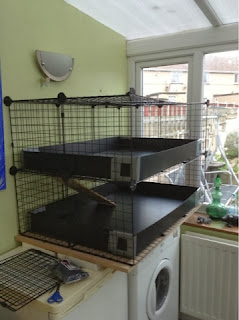 Now for doors.  As the trays have been designed to slide out for easy cleaning, we needed hinged doors.
Cable ties - lots!  When they are closed they will be held together with Carabiner Clips. 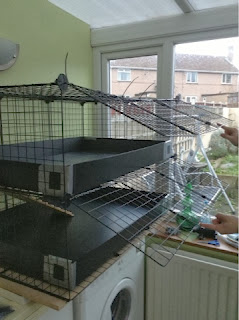 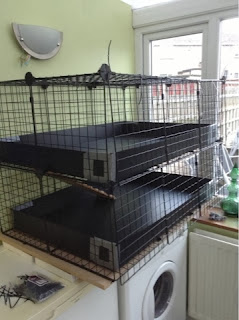 A little hidey-hole, and the kamikaze tube to play in, and a pile of delicious hay upstairs. 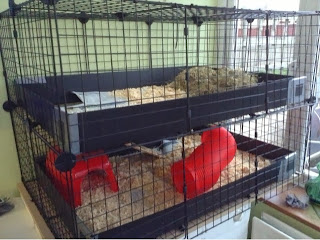 Settling in, although at this moment in time they don't seem to have noticed there is another level. 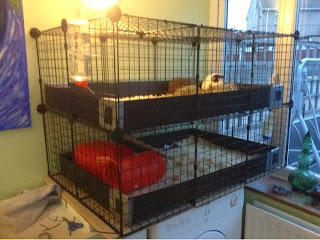 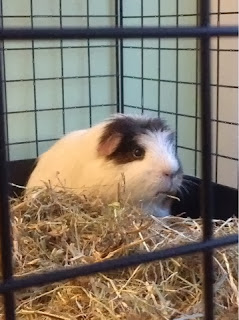