Day 2 - A day on the beach, Praia de Rocha, Portugal

The day began with that bloody cockerel waking us up in the early hours. Hubster managed to sleep through it but I got up and did some crocheting on the balcony before breafkfast, which consisted of french stick, cheese, Nutella & jam and a big mug (mug from home) of Nambarrie Tea - in the blazing sunshine. 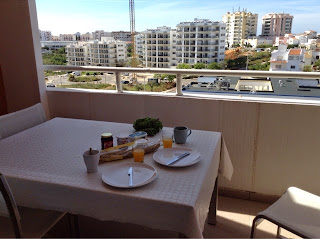 Then it was a walk off to spend the day on the beach.
Now when I say 'spend the day in the beach' we are not sunbed dwellers at all, so it would be a day of walking along the beach and exploring. 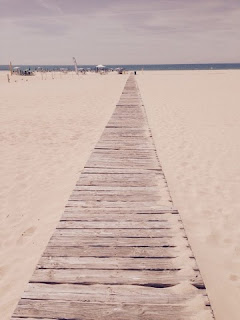 A gorgeous sea breeze and not many people about made it a lovely place to be.  Hubster spotted the lighthouse in the distance, can you see it?
"Let's walk to that", he said. 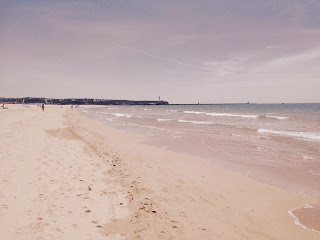 Of course I had to drip my toes in the sea. The Atlantic Ocean. Crystal clear with only the slightest chill upon putting your hot foot in. I wandered most of the way towards the lighthouse while paddling in the water. 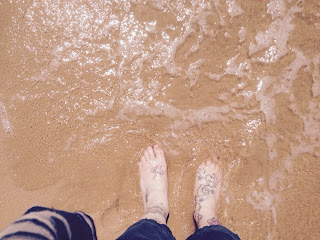 Eventually we reached the jetty and set of the 1/3rd of a mile down it to the lighthouse. (As stated by Google maps) 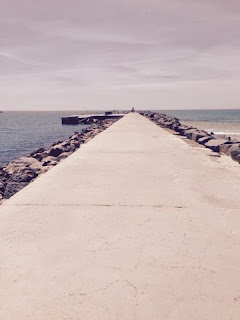 Such a pretty lighthouse, and no people to stand in the way of my photographs either. Bonus! 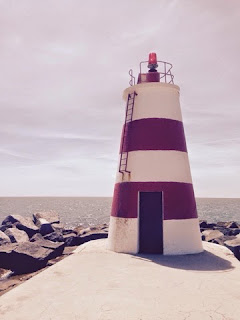 Looking back at Praia de Rocha. 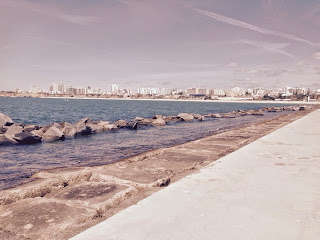 We came back down the jetty and headed into the marina where there was the most gorgeous row of coloured houses, all in varying shades of oranges and yellows.  I could live in one of those, couldn't you? 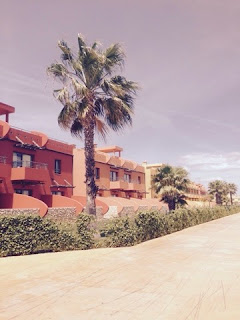 Back to the boardwalk on the beach for lunch. 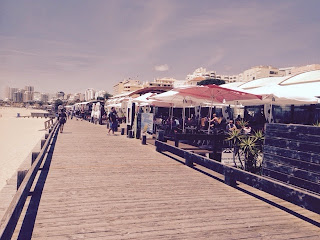 We chose a restaurant that offered a Soya veggie burger - most unusual, so I just had to try it. 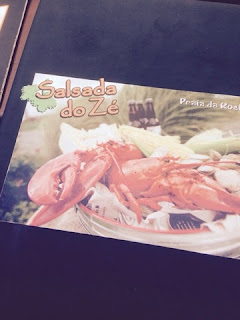 This is where I had my first jug of Sangria, the waiter kinda forcefully talked me into it, and liked it very much. A bit too much in fact. HIC! ;) 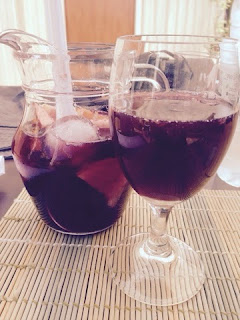 The burger was pretty good too. 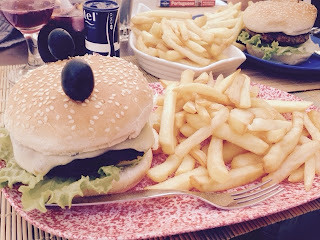 As was the view. 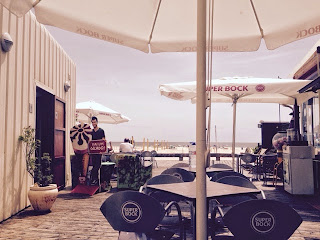 To walk off lunch we wandered back up the beach to explore some rocks. We did wander around done but the tide was coming in and we didn't really fancy getting stranded. 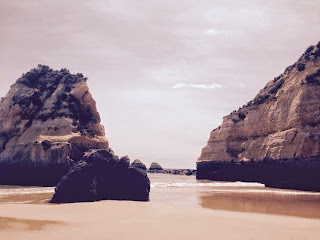 So back to the hotel to try the 1.99 euro bottle of wine, which I had no expectations of it being even drinkable, but was actually very nice, and a bit of crocheting.  Well I couldn't carry my yarn all the way to Portugal and not actually do anything with it, now could I? 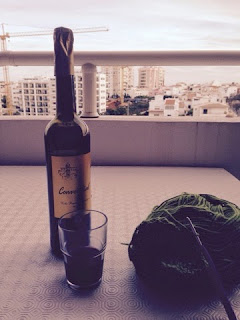 A small nap & shower later & we were ready to find somewhere for dinner.

Walking along the strip of restaurants at Praia de Roche you get targeted by people trying to entice you into trying their establishment. (As well as people trying to sell you cannabis disguised as sunglasses - yeah, really)

We passed the Chinese buffet place again & Hubsters eyes started to grow, he does love Chinese food, especially the buffets so he can try bits of everything. We decided to give it a go. 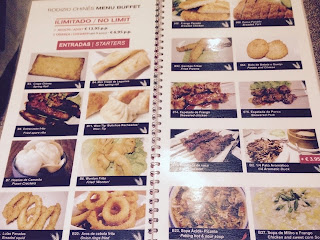 It wasn't really a buffet as such as you order and everything is cooked fresh, but you have to finish what you have ordered before ordering more, which is fair enough.

I got a bottle or wine that came with its only little cool bag. How genius is that?? 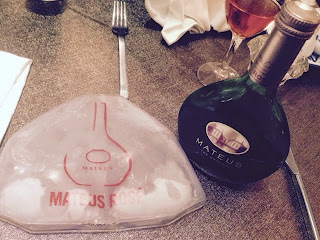 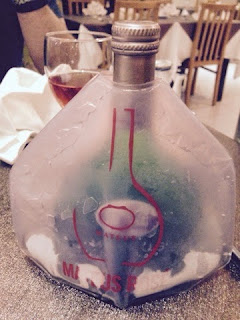 There wasn't actually a lot of vegetarian choice on the menu so the owner said to 'leave it with her' and she round get the chef to name something up. A big plate of spring rolls & tempura vegetable arrived which was crisp and very tasty. 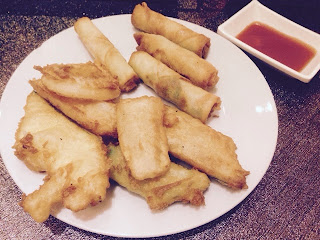 Followed by a veggie curry which was equally was delicious.
The food was really good in fact. 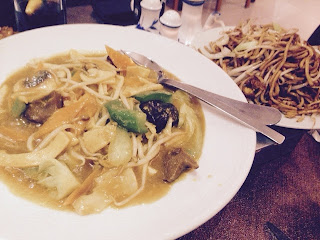 I finished it off with a bit pot of Chinese tea, which I love.  And because I had had plenty of alcohol by that point and still has to walk back to the Hotel  ;) 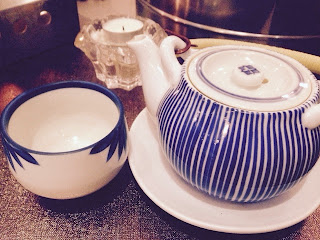 And we got given cloths to wipe our hand which were so hot we couldn't hold them! The waitress brought them to our table she handed them to us with tongs so we had no choice to to take them, but they took a good while to cool,down enough to use them. :) 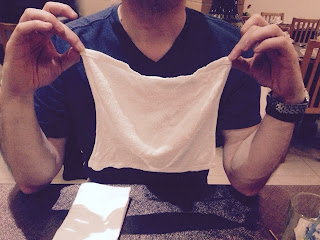 Then we got offered a complimentary glass of Port. When they offered Hubster one I answered for him with "It's ok, he doesn't drink" so, of course, he didn't get one. "Well that was stupid", he said, "you could have drank mine". 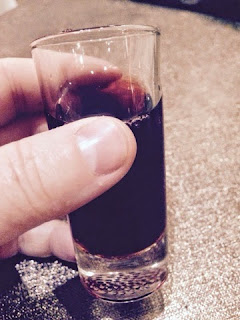 And today's little stroll along the beach was..... 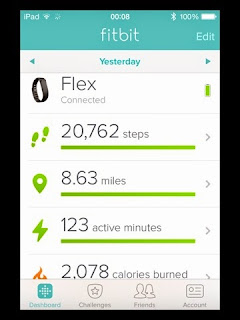