Does anyone know how to spatchcock a Cockerel??  Why do they get up so early? Bloody cockerel.

Our last day and the weather was bright & sunny which called for breakfast on the balcony again. (Whilst listening to that bloody cockerel crowing) 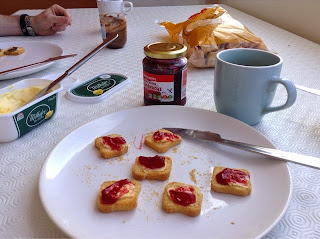 Then it was time for a boat trip, down the river Arade, to the old town of Silves. 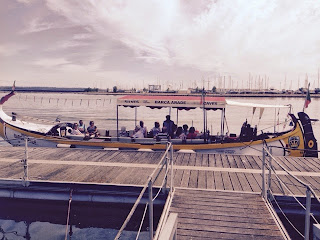 It was a toss-up between this trip, a cave trip or a trip out to see to watch wild Dolphins.
I so wanted to see the Dolphins, but last time I was out at sea was a good few years ago in Spain when we decided to take a catamaran trip to swim in the sea. Well, from the minute I got on the boat I was green, as was Shona, and we spent the whole trip laying down flat on the decking to try and keep our stomachs intact. After 5 hours of that we were back on dry land but we're still so ill we had to spend the rest of that day in bed, so I didn't hugely fancy risking that again. 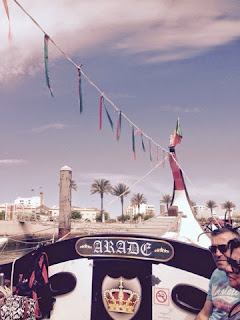 But a boat trip close the the water, and on a none bouncy river, would be ok :) 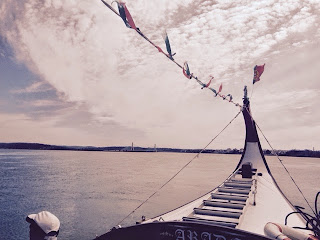 We passed this cave where..... now hopefully I get this right and there wasn't too much lost in translation ...... ladies who lost their fishermen husbands at sea came to pray for protection and to ask for a new boyfriend ;) 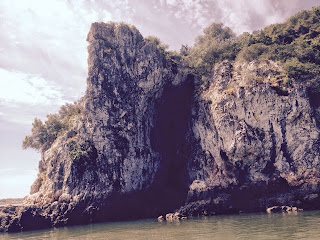 You can see just inside there is a placque of some sort. 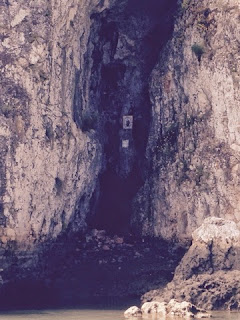 While on the boat we got a choice of Aqua (water), Orange Juice (fizzy orange pop) or wine (alcoholic home-brew). Of course I had wine, grimaced, drank it, got topped up ;). Cheers! 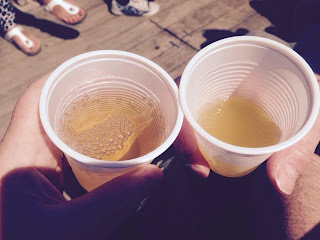 Then we left the main part of the river to pass a little island where  they used to collect taxes from the boats that passed. 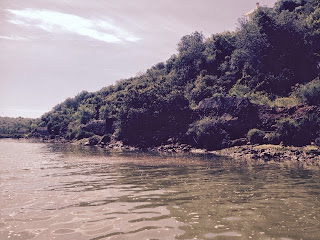 It was a much smaller river with loads of wildlife. Basking turtles were fun to see, all lined up that the riverside, sun-bathing on the muddy banks. 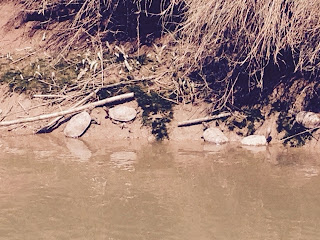 And some stork nests. There were three babies in this nest, all squawking for their lunch. 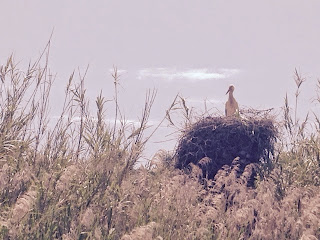 After an hour and a half we arrived at Silves, a beautiful little place with with very little shade from the blazing midday sun. 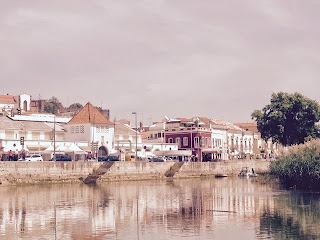 We kept the boat and went off to explore for a couple of hours. 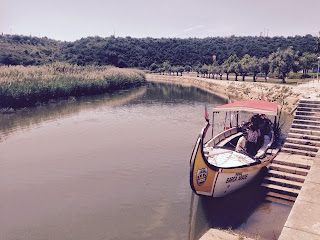 Quaint narrow little streets, that usually have touristy shops open, but Friday was a bank holiday (Labour Day) so most of them were shut unfortunately.  In fact, we only found one that was open. 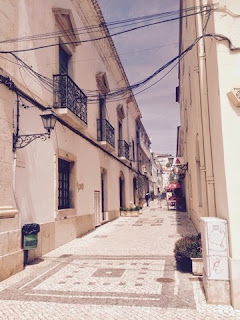 But the restaurants were open and we found this one in the river front called Art'Aska - offering paella, pizzas and pastas. 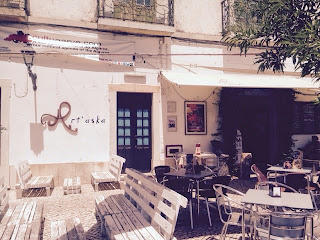 And ice-tea cocktails (non-alcoholic!!). This one was Tropical Fruit cold tea. 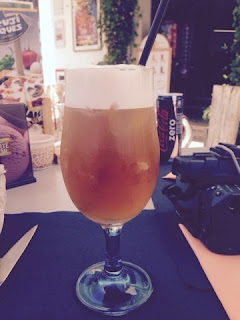 I had a veggie paella, with artichokes, cauliflower, broad beads, sugar snap peas & corn. Very delicious and I was so chuffed to see something decent for a vegetarian being offered. 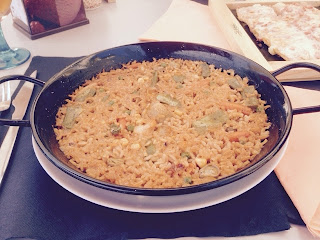 Hubster had a pizza type thing which he got a cute little cutter with, but it was served on an iron plate that burnt his fingers when he tried to pick it up ;) 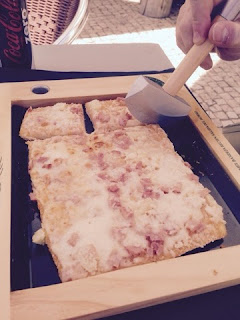 After lunch we (He) decided to walk back down river to try and get some better photographs of the Stork nest. The plan was to sit and wait for the parents to return but I was melting in the blazing heat so I sought out the only shelter I could find - a tiny triangle of shade in a nearby exercise park!!  Who wants to exercise in this climate? 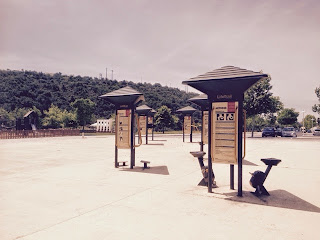 Still, I sat on that bike and pedalled gently (as in not using much energy) until I got bored then went to join Hubster, in the sun, to take photos of the stork and her family. 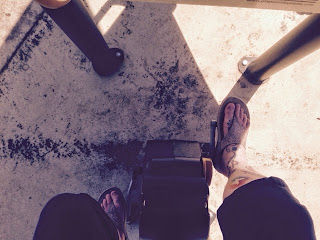 Or it might have been Mr Stork of course, a magnificent creature none the less, and far enough away for me not to have to worry about feathers ;) 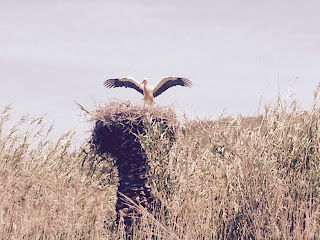 Then it was time to head back to Portimao. With more cheap wine. 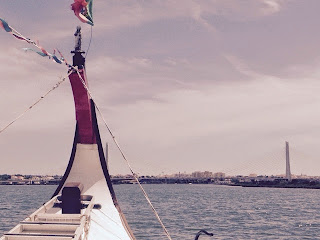 Each day we have been heading back to the apartment for a rest, but as it was gone 4pm already we decided to stay out and about, so headed back to the beach.

The beach is quite low down from the main shop/restaurant strip, although there are a few restaurants right on the boardwalk. See the white steps at the foot of the cliff? Yep, those. Steep! 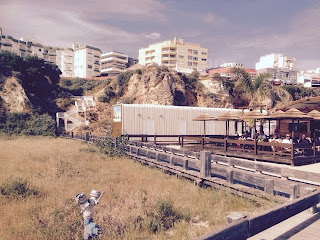 We stopped in one of the beach front cafés for a Sangria (water for him) and a final look out at sea, as this was our last day :(

Cheers Portugal, it's been a blast! 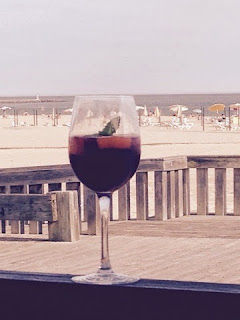 Hubster soon got bored of sitting about, so while I sat and enjoyed the view, he wandered off to take photographs through his marbles.  You can find out more about that on his Facebook Page - iMarbles 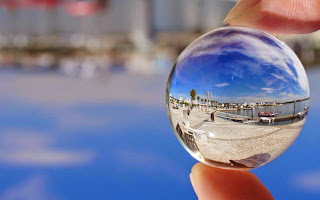 We couldn't decide what to have for our final dinner so we tossed a coin and ended up visiting an Indian restaurant, which was very nice, and very garlicky, just the thing for the plane ride home ;) 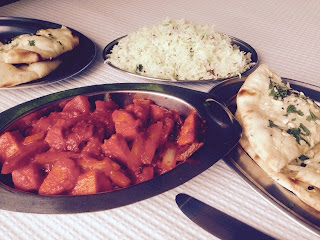 Not as many steps today as we spent 3 hours on a boat, drinking cheap wine out of plastic cups  (well, I did  ;)  )

Then we got an early night, for to be sure, that bloody cockerel would be waking us up nice and early in the morning.

Still, I would rather listen to the cockerel crowing than rowdy drunk people, so I will forgive it  :)

And that is my holiday to Portugal over, I enjoyed it lots and I hope you have enjoyed the little travelogue you have been subjected to.   Ain't you glad I didn't go for a fortnight?   ;)