Today’s task is to try and tackle a door and a window.  Easy said than done, I have since discovered.

I have a pile of photo frames left over from my Cross-Stitch kit days, which I thought would make quite a good window frame.  And I used two pieces of cladding wood to make a door shape.  I was quite happy with that. 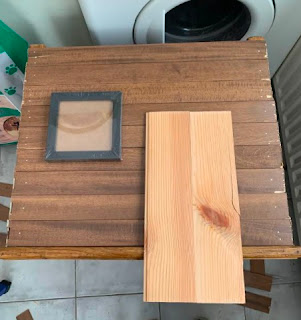 I measured the gap in-between the table legs and the space where I wanted the window to be and cut some lengths of blind slats… to my joy I realised that three slats measured exactly the same as the frame side.  I got some nails and tried to hammer them onto the frame.  It didn’t work!

The frame didn’t want to be hammered into and I split lots of pieces of slats trying. I was getting incredibly frustrated and I was swearing… a lot! 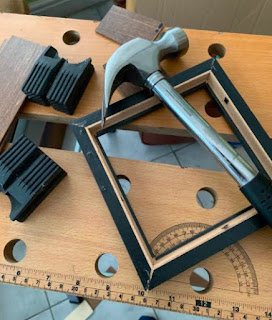 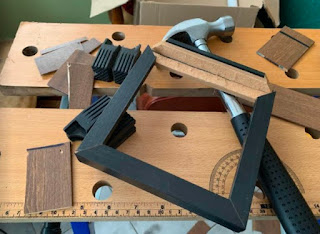 So, I took a break, went and got a strong coffee and thought about it.  As I thought about it I spotted some smaller, thinner nails in the tool box….. eureka!   I was obviously using the wrong nails.  So, I went back and tried again with the smaller nails.  That did not work either, in fact the frame gave up on me at that point and decided it had had enough.  In the scrap box in went, and I went to get a new one out of my stash.

My next attempt was to try and glue it, I had bought some wood glue to put the trims on at the end. I have never used wood glue before, and I couldn’t imagine it would be strong enough to do this job, but I had no other options that I could think of. 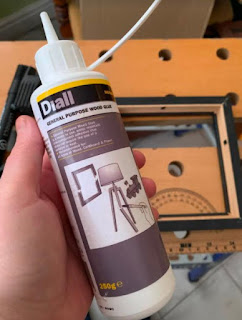 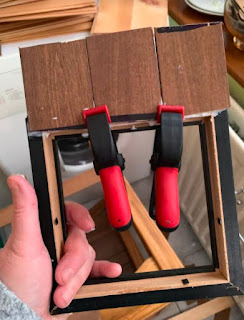 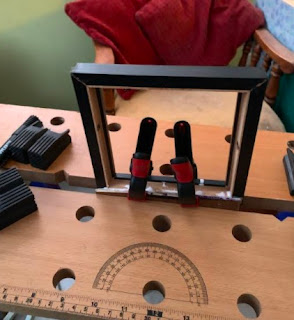 I held it together with the two small clamps I had bought, thinking they might be useful… now wishing that I had bought a whole load of them because they are very useful indeed, then realised I couldn’t really put it down or the clamps would ping off.

So, I clamped it into my Workbench, which then meant I had taken away my workspace and couldn’t cut any more wood.

I really need to be more organised with this project I think.

So, that brought my shed making session for today to an end.  I am keeping my fingers crossed that the wood glue works well, I shall see in the morning.