Deciding on a layout for my clock.

Sometimes I have a determined plan in my head about where a design should end up, and other times  (most others) I just see how the pieces fit together and how much I like the look.

Not just with glass, but also with quilting and crochet, I will lay out a design, take a photo, move it around, take a photo...numerous times.  Then I go and make a cup of tea and flick through the photos, finally choosing a design/layout that way.

You seem to get a different view through a camera, you can certainly spot flaws and mistakes more in a photograph I think.

So I laid my bottles out in the kiln... 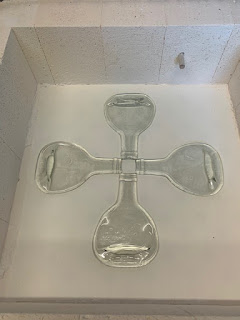 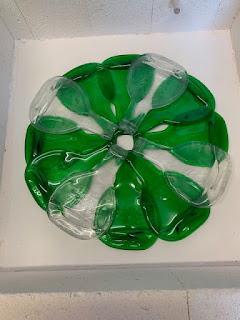 Then I decided that I really did need numbers, at least on some of them.

Using some old copper sheet that I had rescued from a fire pit, hence the beautiful colours on it, and cut it up. 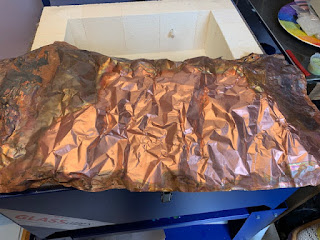 I decided on Roman Numerals as it would be much easier to cut straight lines of copper sheets, rather than cut around shaped numbers. 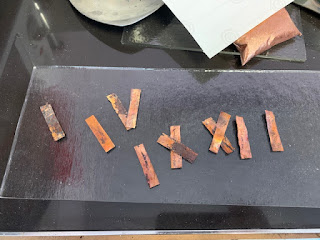 I don't know where my head was when I did this, as I cut enough pieces to make up numbers 1, 3, 6 and 9, it wasn't until I was placing them that I realised I need a 12 instead of a 1.  thank goodness I caught that in time!

So, back to the kiln and laying out a design. 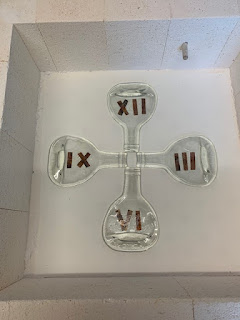 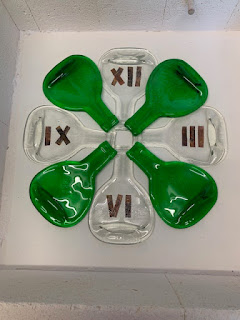 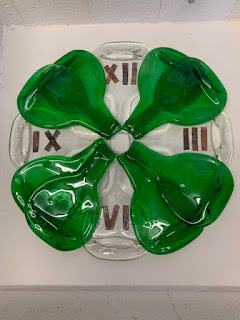 I finally settled on the middle design, it was a difficult decision which I pondered over for sometime.
The bottom design used all 12 bottles, which equated to the 12 numbers on a clock, but it just seemed a little bulky, plus I thought if I halved the use of the green bottles it would leave enough for another art piece in the future perhaps,
The kiln lid is now tightly shut and heating up nicely to fuse all the pieces together.   Fingers crossed!
Posted by Sooz in The Shed at 10:01