I have finished my uni piece for my 'Sustainability' assignment. 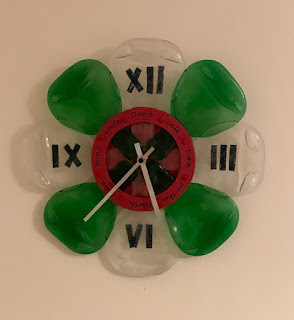 Due to the fact the working with glass isn't one of the most sustainable art forms, I decided to create a piece that might draw attention to the plight of the planet instead.

I also decided that I would not purchase anything to create this piece, but concentrated on working with things I already had.

In my head I wanted to make a clock, to draw attention to the fact that we have limited time left to help the planet.

I had a box of mini wine bottles that I scrubbed and dried, then popped in the kiln to melt down flat. 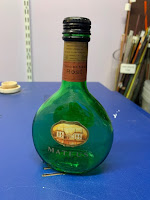 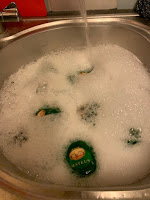 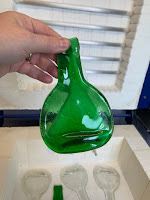 My kiln is quite an energy efficient one, as it's not soo big, but I did need to do a couple of firings to complete my piece.

Once they were flat I messed about for a bit trying to decide on a formation. Ideally I would have liked to use all twelve bottles, but this was going to make the clock too heavy to hang.  In the end I decided on a formation of eight bottles, leaving some to use in another project at a later date.

I cut the numbers out of old copper sheet that I had rescued from a fire pit. 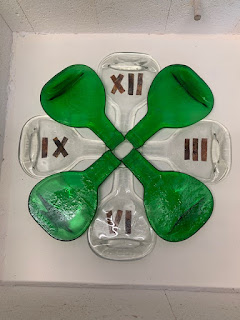 Once that was all nicely fused I was just going to fit a clock part, when I came across a clock kit in my stash that had an interesting wooden ring. Immediately I thought this would be excellent as a 'warning' ring if painted red.  Warning road signs are usually red rings.

Because there was also another piece of round wood in the kit, I could sandwich the glass in-between the pieces with glass glue and bolts - therefore making it a much sturdier piece to hang on the wall. 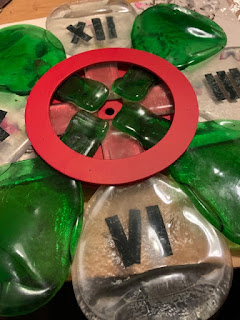 As I now had a red warning ring I felt like I needed a warning statement to go on it.  My daughter helped me out with that - I wanted both the words 'Time' and 'Waste' within it.  She she wrote... "Don't call time on the Earth, reuse, don't waste". That worked really well so I wrote it on. 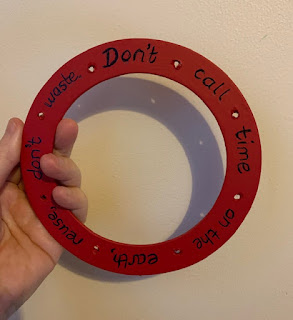 I was VERY unhappy with this as my handwriting is appallingly bad.  So it was back to the drawing board for that.

After a quick repaint, I dug out my vinyl cutting machine and I had some scraps of black vinyl left that had come from my old shop many years ago.  I cut out the words by machine this time and it looked so much better.  Using the vinyl was something I wanted to avoid if possible, due to it being plastic.  If it wasn't lockdown and I could have found someone with nice handwriting I would have definitely done it that way instead. 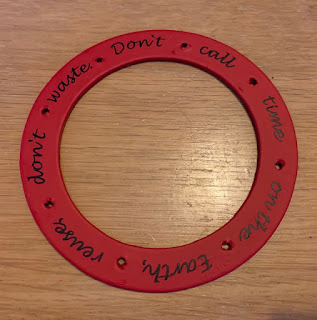 Now it was time to put it all together and add the clock mechanism. 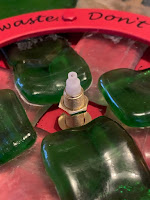 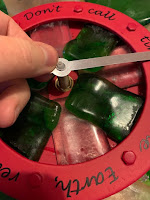 And my piece was finished.  And it holds it's own weight well on the wall... and you can tell the time so it's functional too, as well as being a conversation starter, 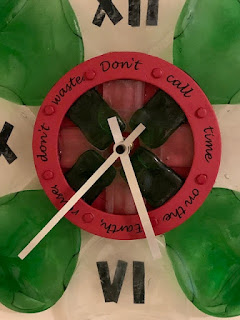 I have enjoyed this project. I particularly like working with materials that might have otherwise gone in the bin.  Giving something a repurpose is something I try to do in other aspects of my life, like adapting clothing and sprucing up furniture.  So this assignment was right up my street.