Live Below The Line - Day 3

A friend very kindly shared my blog yesterday and a friend of hers commented on it in a most negative way.  Basically he was saying that there was no point in challenges like these, that anyone could easily live on £1.00 a day.  Well, true enough perhaps, but in case you were wondering why I am doing it, I shall tell you.

Once upon a time (22 years ago) there was a young couple who enjoyed the "out & about" kind of life, they had a mortage, a decent job each, a car, a computer (Spectrum ZX no less). They used to go out for a lot of meals, buy a lot of novelty things and think nothing of driving for over an hour for a KFC.

Then in the space of a year the two became four.  One of the jobs was lost, childcare was out of the question for two kids so the Mummy had to stay at home and look after them.  The Daddy's wages just about covered the mortage and bills leaving only £40 left.  He gave £20 to the Mummy for food and nappies and kept £20 to himself for lunches and cigarettes.

Once the Mummy had bought formula milk and nappies there was only £10 left for food, toiletries, washing powders, birthday presents and any other thing that pops up.

Mummy used to manage to feed the whole family on £10 a week, she cooked from scratch and made up recipes all the time - some of them really nice, some really horrid.

The mortage went up and the couple just could not afford it anymore, so they handed their keys back to the bank and got a council house.

At this point four was just about to become five (Mummy was still trying to work out what was causing this!!)

Mummy managed to find a job in a bar, she used to pass Daddy on the doorstep as he came in from work.  He didn't like it as he wanted to go fishing and soon that job was lost.

Mummy and Daddy argued a lot, the life that they once knew was gone, Mummy enjoyed her new life, Daddy didn't, so Daddy left never to be seen again.

Mummy battled on, the benefits available then just covered the basics, and barely did at that.  But because Daddy never sent any pennies to help she just had to get on with it.  Mummy became expert at making something from nothing, which was only an issue when the little people brought friends home for dinner and they wanted fish fingers or chicken nuggets!

Things got easier, kids got older, Mummy stayed young of course (well, this is a fairy tale) and through hard work and determination she got bills paid off and everything sorted. Mummy was in a good place.

Things are miles different now from where they were a few years ago. Miles and miles...

For breakfast this morning it was the usual - toast with spread and marmalade and two brews. 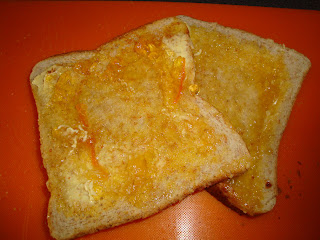 Lunch was a quick bowl of soup and a pitta bread.  I was on a 10am-2pm shift so by the time I got home I was ravenous - I had gobbled it down before remembering to take a photo, but here is the soup  :) 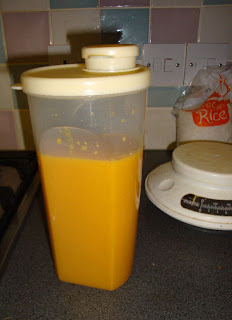 Tonight is the night I am off out to a Bollywood Night, it has been booked for ages so instead I am extending today's dinner into Saturday to completed the full 5 days (3 breakfasts, 3 lunches, 3 dinners). Not ideal I know, but it was one of my quietest weeks so a compromise needed to be made.

So, today, I have spent on food:

If you would like to donate to the cause I would be very appreciative. I am raising money for Action Against Hunger and you can donate here...

Email ThisBlogThis!Share to TwitterShare to FacebookShare to Pinterest
Labels: Live Below the Line