Live Below The Line - Day 4

I wasn't hungry this morning, must have been the big feed last night.  I was very aware when eating my poppadum that the cost of that along would be a whole meals worth of food on this challenge.  It made me feel incredibly guilty, so I am going to stick an extra few quid in my own donation pot to help alleviate that guilt.

Do you ever give food to strangers?

When I had The Bead Shed shop I often walked up to M&S Foodhall which was across the car park behind my arch and up some stairs.  At the bottom of the stairs there used to sit a homeless guy, so I would scurry past, buy my shopping, and some extra bits for him and drop it on his lap on the way past.  I always wanted to stop and chat to him but I didn't think he would want to, I thought he might be embarrassed so I just went on my way.

There also used to be a guy sitting in a subway which, if we walked into town, we had to pass on the way home.  One day we (me and the three kids) decided we would buy him some lunch.  We were popping into the local bakers for sausage rolls and a cake for a picnic on the way home so we bought an extra sausage roll and cake for him.  Walking through the subway I asked him if he was hungry (he was) so I handed him the bag and we went onwards to the park for our picnic.

When we got there and opened the bag I found two sausage rolls and a cake.  We had only gone and given him our bag with 3 sausage rolls, a sandwich and 4 cakes in.    We did laugh as we shared our food and thought about how much sugar he was going to consume that day!

The latest one was when I went to Morrisons last week, there is a homeless guy hangs about that area and he was sitting near the doors when I went in so I decided to buy him a bag of food.  Now the hardest part about doing this is deciding what you should buy.  Will they like onions?  Will they be vegetarian? Will they....Will they......?

Hubster said he was sure he would appreciate anything I got him.  So I chose:

When we came out though, he was gone!

So we drove around looking for him  :)  Luckily he wasn't too far away, but on a busy main road, so we slowed down as much as the traffic would allow and I held the bag out of the car window.  "Want some food mate?"  I yelled, he held his hand out, took the bag and with a toothless grin said "Thanks a lot, duck!"

All I could think about was that I had bought him nuts and he had no teeth to chew them with!

Breakfast was the usual, marmalade on toast with two brews.  (12p)  You really don't need a photo of that now do you?

How about a photo of lunch then?  No, not soup, because my son came for a visit, looked in the fridge (they seem to have a habit of doing that, said "Ooooo soup!" and asked for some.  Well, what mother can say no to a child wanting to eat (even if he is 21 and lives in his own place) so I donate a bowl of my soup to him  :) (He ate his sisters bread and drank his step-dads coffee, so that doesn't count)  :)

I had tomatoes on toast. Nothing to say about that really, toasted my bread, 'buttered' it and plopped the tomatoes on top.  I would have preferred a thicker chopped tomato, it really was very sloppy, but it tasted fine with added mixed herbs.  What I REALLY would have liked was a big slab of grilled halloumi on the top  :) 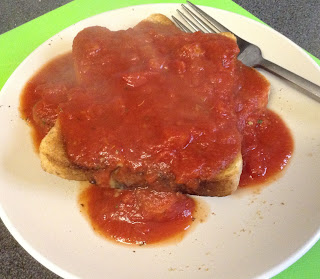 Dinner tonight was a 'chuck in the microwave' kind of dinner, I finished work at 9pm and couldn't really be bothered to make anything. Normally I grab poached egg on toast (it's my staple 'fast food') but of course I had no eggs.  Luckily, I had three rice and bean burgers in the fridge, so I decided to have those on top of a pea purée.

I simply put the peas in the pan and when they were warm squashed them mercilessly with a potato masher, then I sat the microwaved burgers on top and drizzled with cottage cheese (which, incidentally, tastes a lot like sour cream - only lumpy!) 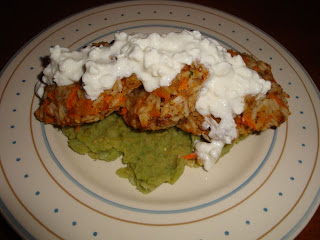 That did the job nicely.

So, todays food costs look this this:


Wow!  Still managed to stay below the line while feeding someone else.

The donations are trickling in steadily and I am so grateful, if you haven't donated and would like to, you can find out how to do it here...

Email ThisBlogThis!Share to TwitterShare to FacebookShare to Pinterest
Labels: Live Below the Line