Tattoos, you either love them or hate them don't you? 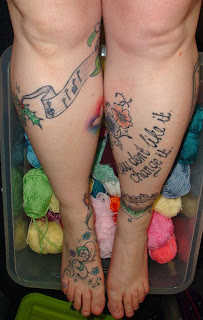 Some people actually quite like to see them but would never dream of having one themselves.

Me?  I have a slight addiction to them.

It started when I was 17 (tut tut) and just had to have one so I had a little butterfly on my bikini line.  I cannot show you that one for two reasons, one because I am too fat to flash that part of my body off in public, but secondly because when I had a Caesarian section they managed to cut the wings off the poor fellow!
(They had put "severe bruising" on my medical notes for three days following, before I remembered what it was!)

In the next few years I got a flower on my booby, a ribena berry on my thigh and a dolphin on my arm. 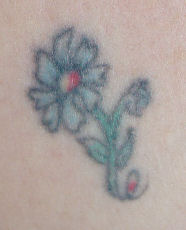 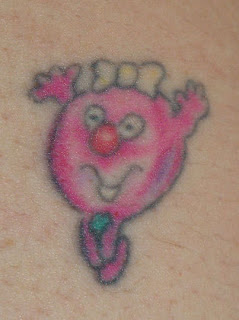 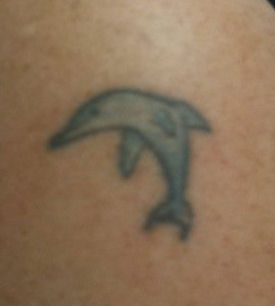 There seemed to be a massive dolphin tattoo craze way back in the 90's - got to wonder why, but these were the days when you walked into a tattoo studio and chose a flash design off the walls.  I have to say I love the fact that you can now design your own, or talk to the artist and get it designed for you.

Next came this Celtic kind of 'thing' - another flash image chosen from a wall, I liked it at the time but over the years I hid them away more and more.  I mean... WHAT IS IT? 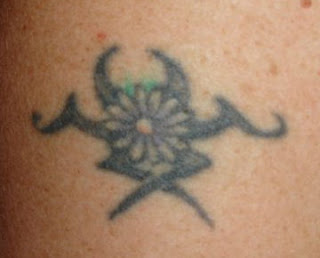 In around 2000 I got a little bumble bee on my foot.  Yep, another flash image, but he is rather cute and I still like him. 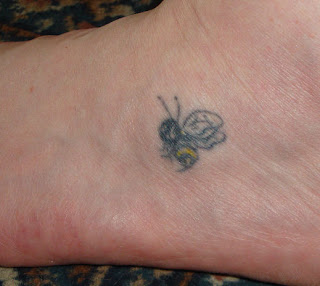 I didn't have any more for a while then I decided I might get another small one, this turned out to be this rather larger one that covered the hole of the top of my right foot. 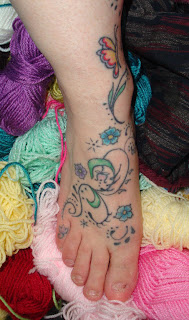 That was when the real addiction started to kick in,  I decided to carry on with that tattoo and curl it right around my leg up to the knee.  But it had to be meaningful, I wanted it to tell a story.

So first I got a little butterfly, I do like butterflies, and this one has UV ink it in so if I am ever in a night club (coz, like THAT'S gonna happen) my tattoo will show up).
At the same time I got a sunflower, which is my birthflower, and a lovely design that I found on the kitchen roll  (see, I told you it's all meaningful  ;) ). 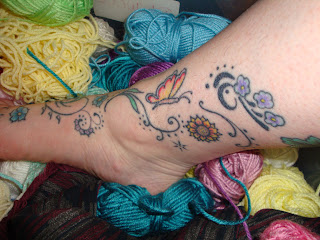 Next came grapes, this is on the back of my lower leg.  Anyone who knows me will know I love my red wine, so this is a bunch of purple grapes with drips to represent wine :) 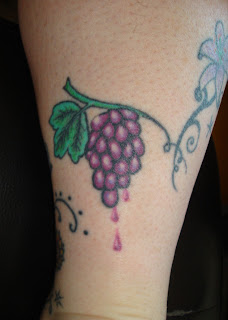 Following on up the outer calf I decided to have birthflowers for the kids.  First is a Lily for Shona (August), then a Chrysanthemum for Adam (November - he wanted it to be pink!) and then a Holly for Iain, my Christmas baby (December) 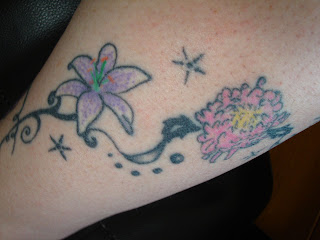 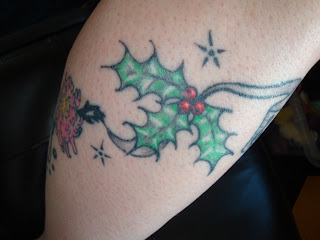 Coming back round to the front of the leg I had a music score because I LOVE music, with the notes spelling out the word "BEADS" - now, the "S" is a little contentious because there is not really an S in music, but Shona, who was studying music at the time came up with a solution - I can't really remember it now, but something to do with Russian music - anyway, it works for me!  Although are those notes the right way round?  They've always looked ok to me but then again I am looking at them upside down or in a mirror most of the time. 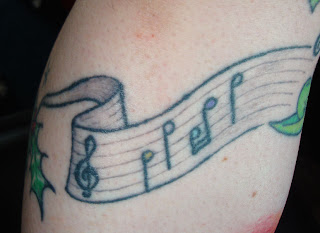 The final part of this tattoo I wanted Andrew to design, something to "depict us", I said, this is what he came up with...Peas in a pod. 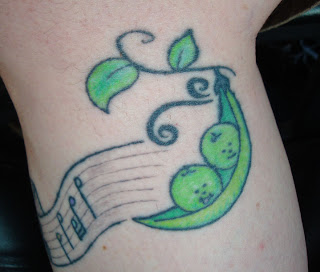 After our wedding in 2005 and looking back at the photos with my arms on show and some horrible greying tattoos I spoke to my tattooist about getting them removed.  He said that the scar would be as bad as the tattoo perhaps and I should think about "arting them up" instead. 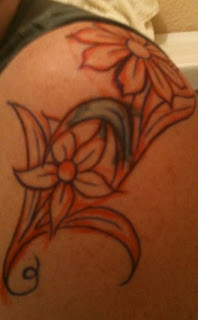 Hello flowers....(see him?  he's hiding there in the leaf) 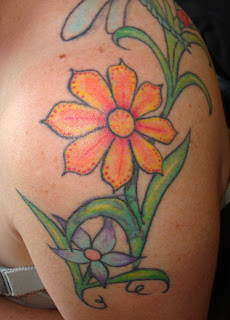 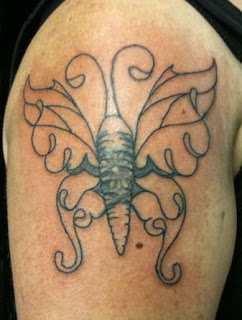 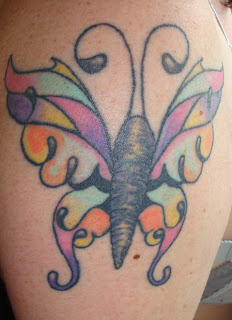 So, let me explain the Lady Willyfly.  while getting the tattoo one of the tattoo apprentices mentioned that it looked like a carrot, then changed his mind and said 'Willy', so Lady Willyfly was born.

Obviously by this stage I am quite deeply into the addiction stage so why not join them up across the back? 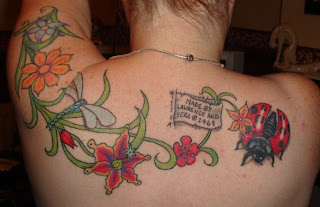 You see that big ladybird?  That is actually a cover up of a cover up. 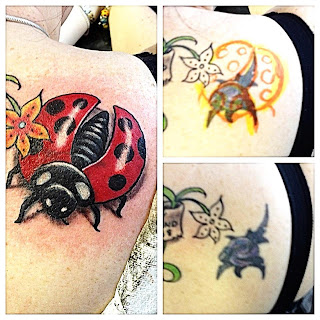 Again a weird Celtic thing was originally covering up a really naff rose stem, but that wasn't much better.  The ladybird is much grander I think  :)

Did you spot the little name tag in there? 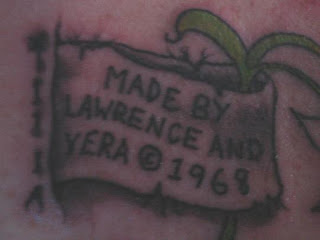 I walked Hadrian's Wall last year and I was so blooming chuffed with myself that I had the acorn tattoo to remember it.  (When you walk the wall route you follow this acorn on fences and signposts). 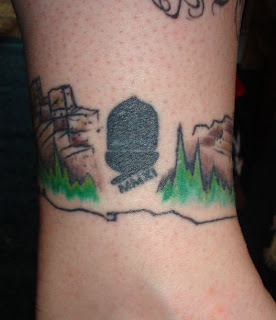 But from afar it just looked like a black blob, so I went back and had some wall put on  :)  To be fair I was only going to have the black map line added but the tattoo artist got a bit carried away  :) 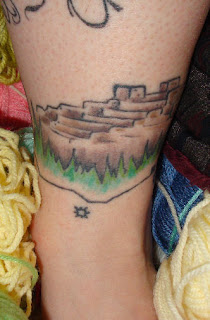 A while later I had a few flowers added to this leg...

Then my favourite quote.... 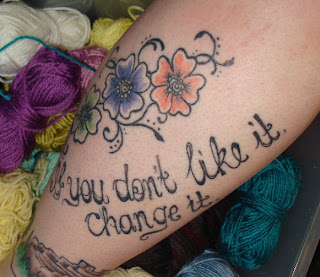 This left a large gap on the outer side of my calf, so I got it filled in with an Egyptian Cartouche.  Can anyone read what it says? 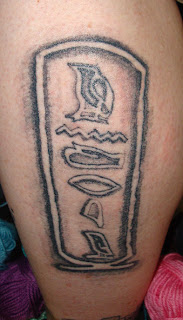 This tattoo is actually unfinished, it has loads more shading to do, but I was full of cold that day and it hurt like hell.  It will look very ancient with cracks in when it is done, looking forward to that.

I love this one too, it's my very colourful flowers one.  This is me being a practise canvas for a very new tattoo artist, I am proud to sport her very first tattoo ever.  It is situated on my right thigh - a nice meaty bit of flesh.
It grew from this... 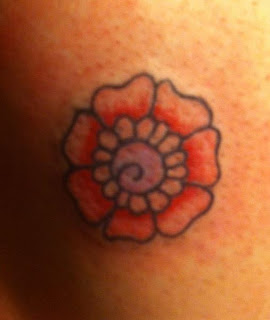 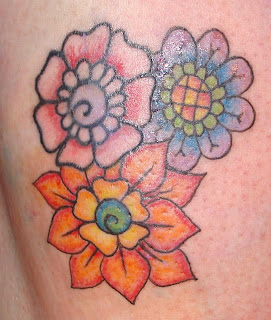 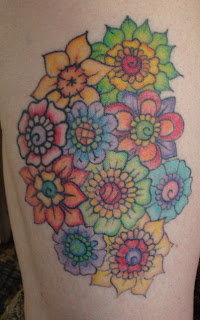 Room for a few more on there though  :) 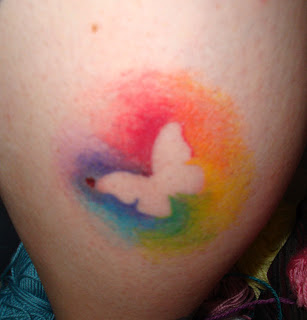 It is a negative space tattoo, meaning it's NOT a butterfly, if that makes sense  :)  Ignore the scabby bit, I managed to forget it was there whilst shaving the hairy forest that is my legs and nicked a healing bit.

What's next?  Well, some more flowers, the cartouch finished, a patchwork owl and a tree of life  :)

Do you love or hate tattoos?
Posted by Unknown at 10:10

Email ThisBlogThis!Share to TwitterShare to FacebookShare to Pinterest
Labels: tattoo