The technique was to cut up strips of old sweaters and sew them together using an overlocker sewing machine.  I didn't have an overlocker at the time, but I bought the pattern anyway, as it's just a bit too cool and hippy  :)

You can find the pattern HERE if you fancy a go yourself.

Anyhooo months later, in November 2012 would you believe an Overlocker popped up on a Facebook selling site?  No?  Neither did I.  I was bouncing about in my office chair like a woman possessed.

Even then I had the patience to go in with a lower offer, and it was accepted!  I got this 9 month old overlocker for £65!  Bargain! 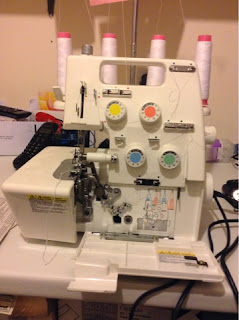 For months it has sat in the box, unloved.  To be honest all those dials frightened the life out of me.  It takes me all my time to thread my single sewing machine needle, never mind four of them!  Not attempting it, no way, no how.

Fast Forward 18 months and I got talking to a friend, who uses an Overlocker quite regularly.  She offered to give me a lesson, so off I went, box tucked under arm.  She took it out - whipped in the threads at record speed, threw a bit of fabric at me and it worked!!!  I overlocked something  :) 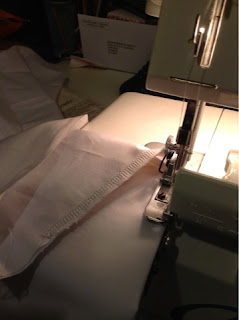 Right then, off to the charity shops for some pretty coloured sweaters   :)


ps: The Amazon links are affiliated  if you click and buy I might get a few pennies.  Just so you know :)
Posted by Unknown at 11:13