A good while ago I was given three large balls of pom pom yarn to play with - one pink and two rainbow.

I have had this yarn before and ended up throwing it in the bin is disgust as the blooming thing gets knotted so easily!  The pom-poms just don't flow past each other as normal yarn does and before you know it you are all in a knot.

Anyway, three balls, what to do? 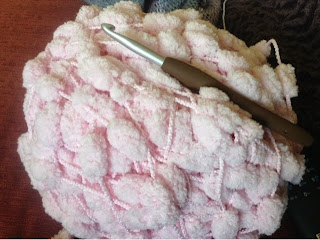 I just decided to see what happened with it when crocheting.  In the past I have only knit with this yarn, so this was a whole new learning curve for me.

I decided to Double Crochet  (UK)  using each gap between pom-poms to make the stitch.

It's a very chunky effect, solid almost, way too hot for a blanket... more suited to a floor mat in my opinion, or at least something to lay on, and as I had three balls I thought it would just make a baby size floor mat - squashy, comfy, cute and warm. 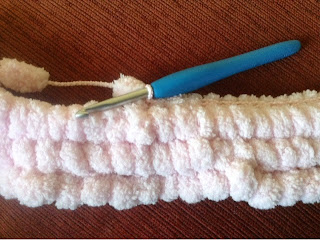 Wasn't long though before I got in a big fat knotty mess. 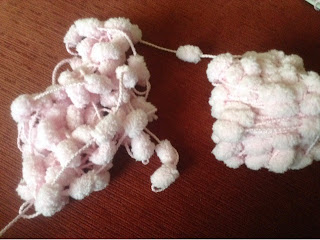 Poor Hubster got the job of untangling it all.  He does this, without fuss, for two reasons.  1: because he loves me, and 2: because he knows if I try to do it myself I will end up having a paddy and tossing it about making it in even more of a mess before demanding that he "sorts it out".  (He's a good guy that one) 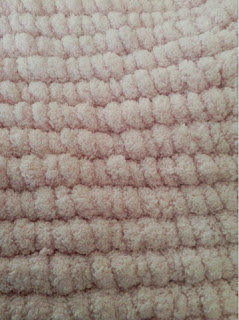 So, one ball gave me this  (hook placed for size comparison) 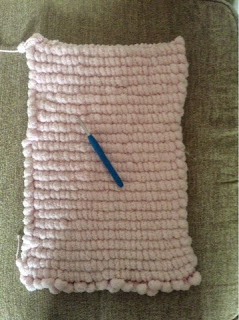 So, now for the rainbow edging.............  notice the support socks, I had a little procedure done when I was making this so had to wear them, flattering don't you think? 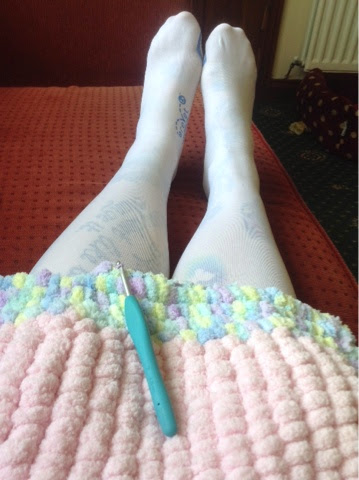 I will be pleased when this one is finished as it's quite a challenging yarn to work with.