Last weekend was our regular girly trip to Glasgow for a bit of shopping, eating, drinking and theatre.

So at 10.01am we were all seated on the train and our breakfast goodies unpacked.  Crisps, nuts, party ring biscuits, Pringles and Quorn pork pies for me  :)  All washed down with little cans of cocktails.

We arrived in Glasgow and had to find out guest house.  The one we usually book was full so we had to try out another, it's always a bit worrying when you book somewhere unknown, reading the reviews on Trip Advisor sometimes isn't the cleverest thing to do, but it was fine  :)
We stayed at a place called McLays Guest House and we had two rooms, a room for 5 and a twin for the younger members of the party.

We then went to indulge in a bit (a lot) of shopping - there was a fabulous street market on all the way down Sauchiehall Street, the food stalls smelt amazing, but we had a table booked at a restaurant for later on, so we had to be good.  Having said that, I can personally recommend the freshly cooked macaroons  ;)

Pizza Express was our pre-theatre dinner destination. They do a 'celebration menu' for £17.95 which was very good value with antipasti, doughballs, a meal of your choice and a selection of desserts, all with a drink of choice too.  We would definitely go for that again, it was delicious.

Then followed a quick drink in Wetherspoons where you could buy a bottle of wine for £6.09!   SIX POUNDS AND NINE PENCE, can you believe that?  Hic!

This is us, trying to do a selfie, but it wasn't until I uploaded it that I realised that Carol is missing, she is off to the right hand side....somewhere. 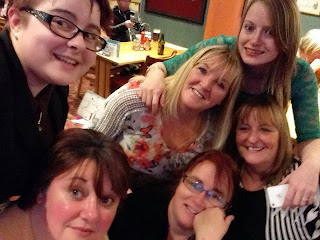 Then to the Kings Theatre to see The Full Monty.
What a brilliant show, only slightly spoiled by the noisy, inconsiderate asses a couple of rows behind who just would not shut up heckling.  Luckily the staff were onto it and stood at the aisle ends most of the show to keep them calm.  Good job too as I was getting most annoyed. 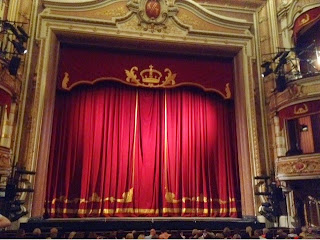 We were in bed as soon as the show finished, even the youngsters.  It had been a long day  :)

After breakfast the following day, which was great - a full cooked plateful of veggie goodness, we set of for another shopping spree.

Then it was time for afternoon tea at The Butterfly and The Pig.  A vintage style tea-room with mismatched china and rustic tables and seating. 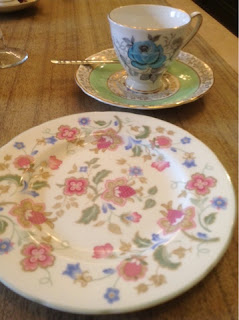 This.... was just for me!  Being the fussy veggie, I had my served separately from the carnivores.  And I ate it all too!!  Deeeelishus.  The cucumber was soaked in a cider vinegar, I could have eaten my own body weight in it. 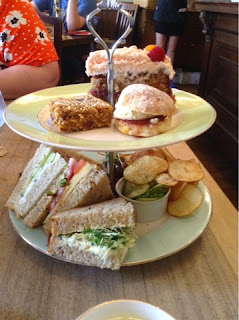 Washed down with bubbles.  Well it would have been rude not too  ;) 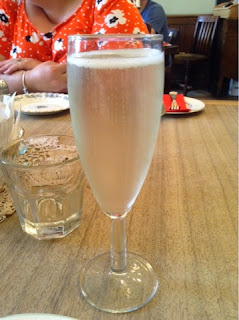 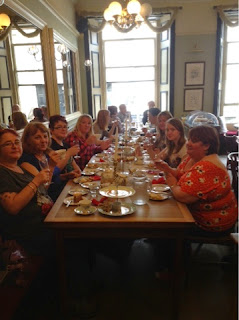 We got home about 6.00pm, tired, spent up, with aching feet and a need for a good strong cup of tea.

What a great weekend though.