On Wednesday I went along to Eden Valley Hospice to do a demo, using odd socks as it was National Odd Sock Day.

Now, I have made plenty of sock monkeys in my time, but they take a pair of socks, and this demo was specifically for odd socks - or in my case, single socks, as I did have pairs  ;)

I was given a whole bunch of fluffy odd socks a little while ago and these were absolutely perfect for this craft.

I decided to make monsters.   Easy to do, a quick run on the sewing machine to make the shape, then stuff and sew before adding eyes and a beak.   (I will do a proper tutorial on them soon, promise)

I made a couple  of sample fellows to take with me... 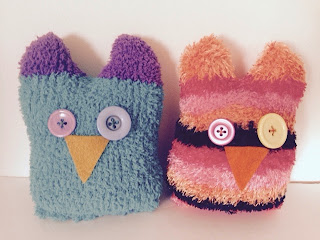 Then added a few friends, as I thought after the demonstration they could be sold for charity.

The demo ended up being a workshop, with everyone wanting to make their own monster  :)   Buttons, felt and stuffing galore as we stuffed and sewed up odd socks. 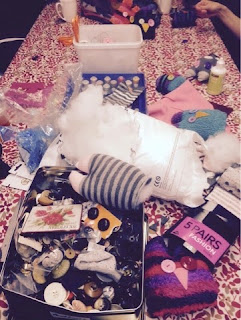 And what a colourful bunch of sock  monster were produced.  Along with a sock monkey to keep an eye on them  :) 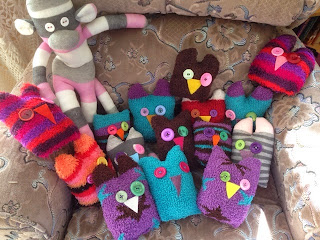