Following on from my blog about my new Biorb fish tank, I would now like to introduce you to ..... 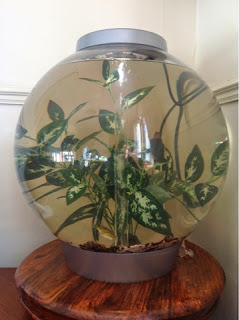 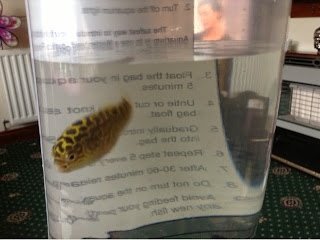 George is a Figure of 8 (or F8 for short) Puffer fish.  Look at that cute face. 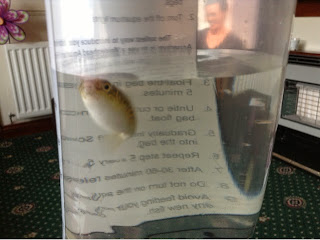 Sorry about the horribly blurry photos, fish are incredibly difficult to photograph.  Hubster sat for over 2 hours with his very expensive camera and got nothing worth showing either.

Here is George, in the bag, getting acclimatised to the temperature of the tank.  This takes about an hour and every so often you add tank water into the bag to help the process. 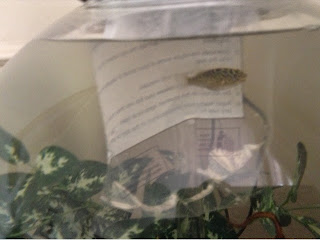 Looking for a way out. 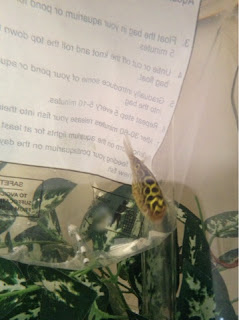 Out of the way and swimming around his new home quite happily. 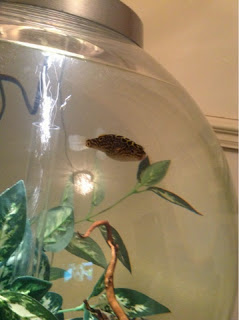 I HATE THE BIORB!

I can't look at George though it, the curvature of the Orb makes me feel sea-sick would you believe?

And when he swims around the edge he completely disappears from view.   The tank was fine when there was no fish in it, but now it's not.

Other family members don't seem to have the same issue, although they are irritated that he disappears and you have to get really close and stare right in, which seems to unnerve him and he swims away to hide.

Already owning a Fluval Edge tank for our Tropical fish we decided on another one to match. 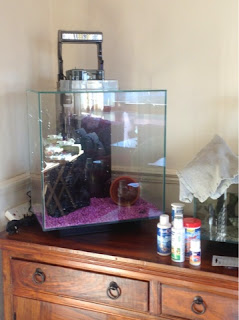 The stones in the bottom are light purple/dark lilac, which gives the water a lovely blue glow. 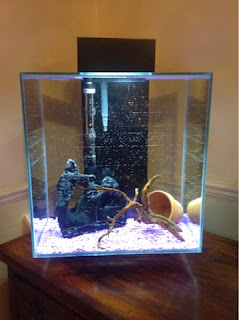 I added a plant pot for him to hide in and a rock to swim through.  Will add some plants at a later stage. 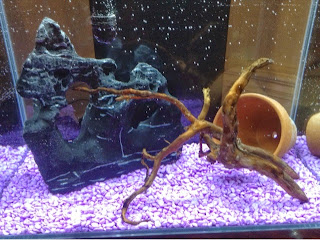 Now it is another waiting game for the tank to do a fishless cycle and get ready to move George over.  Puffer fish need to be moved while in water, because if they puff up when out of water then can get an embolism and die  :(  So, that will be a tricky manoeuvre.

They look quite good side-by-side, don't you think? 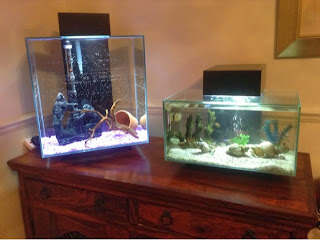 This is my tropical tank.  The new tank for George is a "brackish" tank. For those who don't know about fish-keeping here follows a little explanation.

Cold water tanks are exactly that, cold water, unheated.  In our house (daughter's room)  Goldfish in one tank, and Axolotls in another.

Now if you put a heater in your cold water tank and warm the water up a little, it becomes a Tropical tank.  This is what the one below is.  I have Neon Tetras, Panda Corys, Cherry Barbs, Lampeyes, Black Neons a couple of snails and a Cardinal Tetra who has been swimming on his side for nearly three months now! 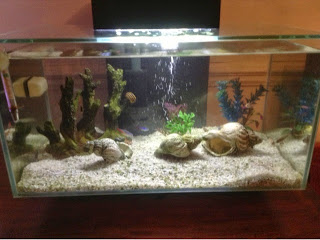 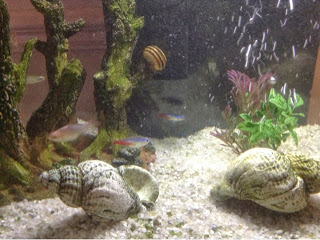 If you add a little salt to that water it becomes "Brackish", this is for fish that are used to swimming in-between freshwater (rivers) and saltwater (seas).  It's not quite as salty as the sea, but it has a little.  This is what George likes.

The next step is a bit more salt to make it a Marine tank - think of Finding Nemo and those colourful clown fish.

Anyway, I have now been waiting patiently for a few days to recycle the new tank and I am just about to pop up to my local fish shop and get the water tested, see if it's ready to move the little guy into, I will let you know how it goes  :)

Email ThisBlogThis!Share to TwitterShare to FacebookShare to Pinterest
Labels: pets