Accidentally stumbling across the Carlisle yarn shop, Truly Twisted Yarns, after joining Ravely, of course I went to visit and found out there was to be a Weaving class on that very weekend.

The class was held in the work area next to the shop by the lovely Jan Beadle.  The looms were all set up (or  'dressed' as I believe is the correct terminology) and ready to go.  We were working on an Ashford 4 shaft table loom and I now want one of my own! 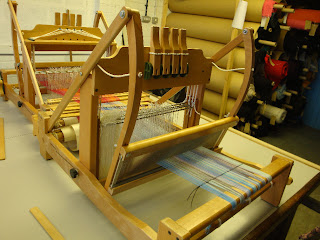 After a little demo on how to thread our bobbins, how to insert a bobbin into a boat shaft and of course how to use the loom, we were set to play. 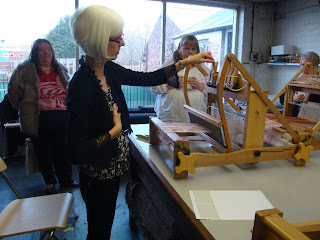 Off we went to Truly Twisted Yarns next door with one of those massive supermarket reusable shopping bags to fill them up with our chosen yarn colours.

I picked these, but I did add a few more colours throughout the day. 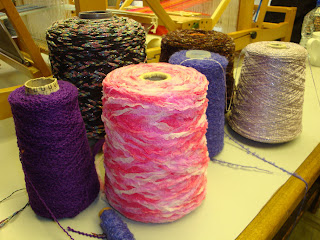 I did an inch or so under Jan's watchful eye to check I wasn't totally messing up then I was off! 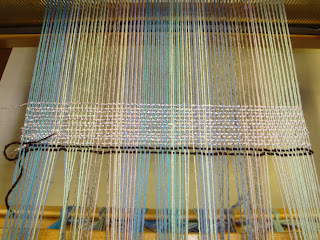 This class has been running for a little while and the aim today was to learn a new stitch/technique - as I was a newbie I chose just to do a little of this and concentrate on the weaving itself.

The technique was "Leno Weaving" which is basically twisting the warp threads with your fingers.  It looks something like this. 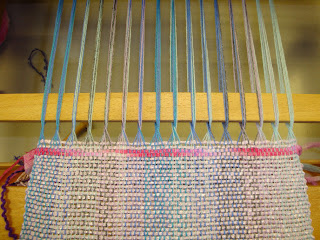 I used it on my borders. 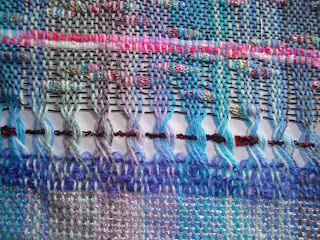 Lunch was included at the marvellous Bobbins Café which is part of the mill shop. You could choose from the vast menu, I had a yummy Brié and Cranberry granary roll. 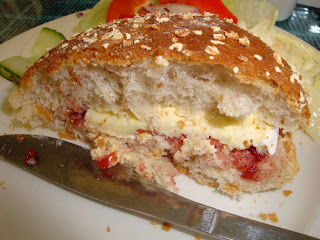 Then back to it.  I cannot believe how quickly the time flew by, all too soon it was time to take my scarf off the loom. 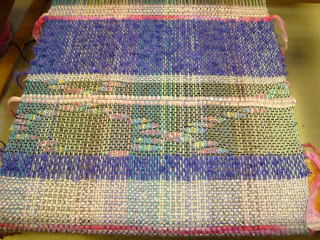 When you are weaving you only actually see about 5" of the work as it gets rolled up, so it's a lovely surprise when it all gets unrolled and you get to see it for the first time. 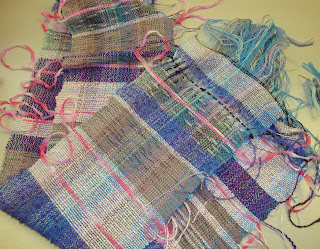 I have to say I was quite impressed with the way my pattern had turned out considering it was so random. 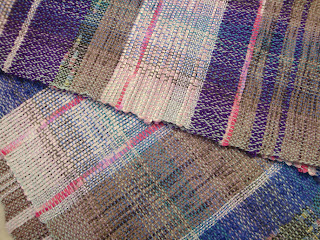 I trimmed off the stray bits - this was difficult for me, being a knitter/crocheter, I wanted to darn in the ends, but apparently they are fine just trimmed.  I think I will be forever expecting it to fall apart! 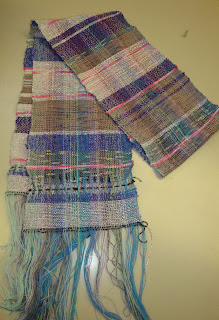 Now time to remove a little edge thread, put in place to stop it all fraying, and tie the fringing.  I decided I wanted it just knotted, although you can rope the ends or plait them.  So I did a loose knot first, then tightened them all up nice and neat. 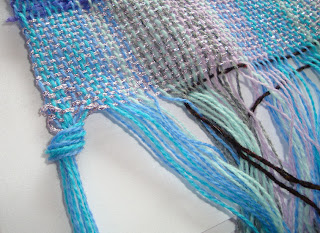 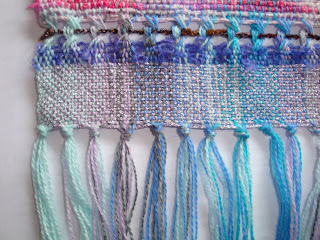 All that is left to do is to trim the fringe and wash the scarf.  You need to give it a good hand wash to allow the yarn to "bloom". I was told that yarns on cones often have oils on them due to machinery and other things that I cannot quite remember, but when these are washed out the yarns puff up and become fluffy and full.  Looking forward to that bit!  There was quite a different in feeling our newly made scarves and ones that had been made and washed.

I thoroughly enjoyed this class, so much so that I have booked to attend the next one which is 18th May (if anyone is interested in having a go, contact Sue on sue@trulytwistedyarns.co.uk