Today I went to see a good friend who lives in Lockerbie.  In fact, she lives on Sherwood Crescent in Lockerbie, the very street that was the landing place of most of the Pan-Am Flight 103 that came down in December 1988.

I always take a deep breath of reflection as I drive into Sherwood Crescent  I remember the sad day and the days that followed very well.

I was 20 years old and working at The Crest Hotel which is now a Premier Inn situated on J44 of the M6.
I heard on the news about the plane crash and like most people, was shocked that something so bad could happen so close  - just 23 miles away.

The next day I went to work as usual.  I worked as a breakfast waitress from 7am-11am.  A nice simple job, served breakfast, went home and had the rest of the day to myself.  Only this morning was different.  The hotel had been taken over and was now a headquarters for all sorts of organisations that were to be connected with the plane crash.  This was the largest hotel close to the scene that could accommodate lots of people, computers (huge things in big black cases), it had plenty of meeting rooms and be a main meeting point.  It was closed off to the general public, those that had been staying were moved out to nearby hotels.

It was never asked that any staff should work extra to take care of the many many people that started filling the hotel, all those meeting rooms needed coffee, food, coffee, food, coffee as the hours rolled by.  All the staff stayed on without being requested to and without question.  My hours changed to 7am - 11pm, grabbing breaks when we could.  We were all shattered.

But we were also invisible   Those people in the meeting rooms forgot we were there, they carried on talking and we couldn't help but overhear.  The snippets of grizzly information were sobering. Shocking.  Disturbing.  We would push in a trolley full of coffee cups and walk out with our stomach doing backflips.   It was all very real, and we were very much amongst it.

It was a quick lesson to learn to train your eye away from flip boards and photos stuck upon the walls, hearing stuff was bad enough, but seeing things was much worse.

I left shortly after, things just were never the same.  I got a job in a cafe in town where I stayed for years.

RIP to the 243 passengers, 16 crew and 11 people of Lockerbie that died that day. I will always remember you when I drive into Sherwood Crescent. 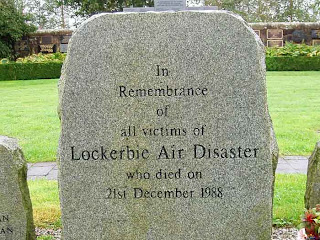 My Mother still says we should have had counselling....

http://www.dailyrecord.co.uk/news/real-life/lockerbie-was-hell-on-earth-its-crazy-1107378
Posted by Unknown at 17:10

Email ThisBlogThis!Share to TwitterShare to FacebookShare to Pinterest
Labels: Lockerbie