Tonight's post comes with a little sadness.  We have had to put "Hamster" our...em.... hamster, to sleep.

Hamster came to us around 2 years ago when Adam (son #2) took it off one of his friends as they were, not mistreating him as such,  but annoying and irritating him.  So, hamster found a home with us.  He was supposed to be 18 months old then, we think that might have been a fib, as they generally don't live until they are that old. 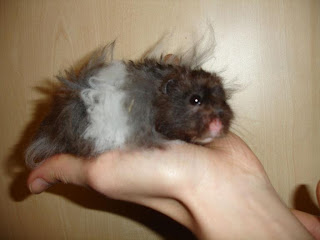 He has been getting a little shaky on his feet and tonight he looked decidedly 'old'. Off to the Vets for a check-up, but he was dehydrated and dozy so the decision was made to let him scurry off up the rainbow bridge.

While we are on the subject of pets, let me introduce you to the rest of our menagerie.

This is Charlie - or his full title is "Professor Charlie Babbit", also known as Mr B. 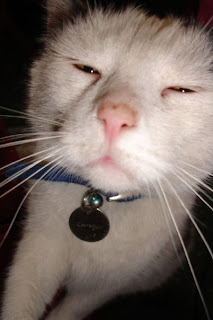 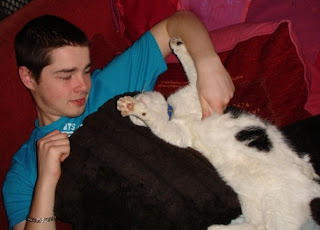 I paid £5.00 for Charlie back in 2001, he was a very cheeky little kitten, my first Tom cat.  He acts like a dog, gives you a paw and 'speaks' if he wants your attention.

Next is Millie.  We were 'persuaded' to take Millie in in 2003, she was just 4 weeks old when we got her and so so tiny.  Her mother had hidden her kittens in a tyre and a farmer drove over the tyre killing them all but one - she came to us with a damaged paw (now healed) and a crinkled ear.  As she is hand-reared she is a very different cat to others, she demands attention when she wants it, if you ignore her she will bite.  She can't scratch, probably as she has never learnt.  She has the word "Hostile" on her Vet records.  But really, she is very cute and lovable (on her terms).  She likes to chew on cardboard boxes. 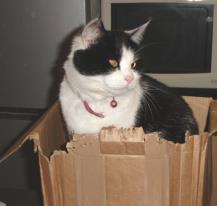 I told Andrew to look in their cages to see if they had soiled neatly (to show they could be house trained)  When he spotted the mankiest looking Spaniel (a girl) with stupidly sad eyes.  He spoke to her, she weed herself with fright, and he said the words I had been dreading to hear, "We'll have THAT one". 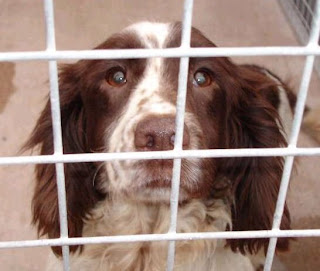 Oh blimey, a smelly Spaniel with matted fur and nipples so close to the ground.  She had been dumped on the motorway, but they reckoned she has been in a puppy farm, kept in an outdoor cage and bred until the Kennel Club would not recognise any more of her puppies.  Then she was dumped.  They thought she was about 7 yrs old.

She took a few weeks to house train, a few months to learn not to chase the ducks at the local tarn, 6 months to learn how to play with a toy, 5 years later we still have not mastered a bark.  She will NEVER be a guard dog, but we love her  :) 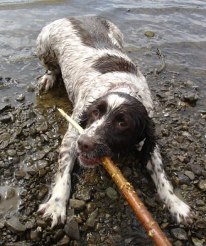 David is our guinea pig,  bought for me, along with his brother Jason who died after a year  :(  He is so mellow and polite, a lovely pig. 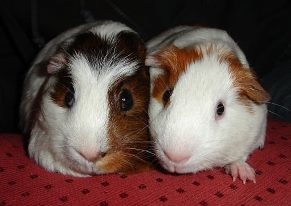 Unlike "The Gingers".  These little buggers are like the Kray Twins.  They are rescues (previous owner had no time for them) They hate being handled and are quite stroppy.  I have to keep them separate from David as they..... well, how can I put this?  They corner him and shag him - lots!   But they have a 10 foot covered run in the garden, so they get lots of lovely grass to eat and loads of fresh air.  They LOVE playing in the hailstones.  It's so funny - rain, they hide in the hutch, but hailstones they go mad jumping about in the run. 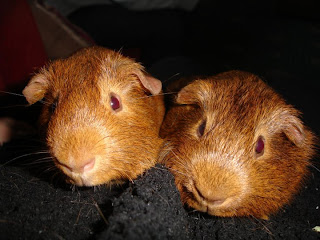 Lastly I must mention Bramble.  Her story is awful. She was dumped on my sisters doorstep, just as she was going to work - she couldn't put her in the house as she would not be there and she had 5 other cats, so she asked me to take her overnight.  I didn't think she would make it through the night, she was in such a state, and so wobbly on her feet.  The visit to the Vet the next day showed she had been badly treated, badly fed (he thought a Vegan diet) and she was totally blind.  £170 later and I decided having spent all that money I would just have to keep her  :) 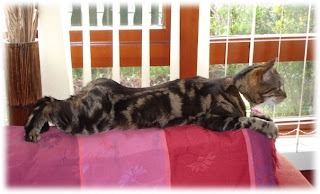 She was a beautiful natured cat, her blindness didn't stop her investigating everything, although we did have to be careful about leaving bedroom windows open as she would sniff the air and think she could get out. 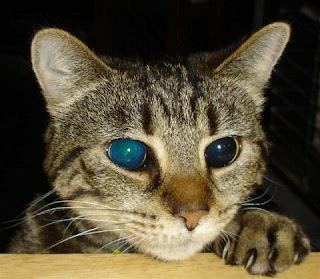 She died horribly, being the target practise of some little bastards with a lurcher.  Witnesses said that they had deliberately let their dog off the lead to go after our cat, but in court it was argued and they got away with it.  Apparently you cannot own a cat and therefore the laws are tricky as to what they can be charged with.

RIP Brambella, we still miss you.

Would you like to see the latest additions to the family?  Shona wanted Axolotls for Christmas.  She calls them Phillip and Patrick.  Click HERE to see a video of them  :) 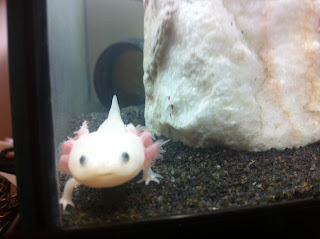