A rant on design theft

I was just about to blog a tutorial, and I am working through them the order of which they are placed in my PC, but I started to have a little rant about this particular piece, which has turned into a larger rant, so I thought it better have a post all to itself  :)

This particular design comes with a bad taste.  It was featured in Bead magazine, oh, a long time ago, and then I was asked permission for it to be featured on Bead TV.  I am not precious about my designs, I design things for people to make and enjoy so I have no issues with them being shared about.

What I did have an issue with however, was one day while sitting on Facebook, an advert pops up for a UK based bead shop and you will never believe what was staring back at me?  Yep, this design.  Not my actual piece, but a piece made from my design.  At that very same point I got a message from a friend saying "Have you seen this........." I decided to have a closer look.

There, on their website, was a photo of their work made from my design with the words "This stunning bracelet was designed by S....." and it wasn't blooming well "Sooz"!!  But I am happy to think they thought it was stunning.

At this point I decided to split the rant from the original blog post and carry on....

Anywhoo, I thought I should write to this particular bead shop and ask what was going on.

Hi ******,
I wanted to talk to you about a bracelet you have on your website as a tutorial.  It actually says it was "Designed by S*****", but one of my customers sent me the link as she thought it was mine.
On looking at it I could see why she would think that, It was featured in Bead Magazine (Bead issue 18, pp. 106-107, Oct/Nov '09 )  but I actually wrote it in 2008, as you can see from my attachment   You might also notice that the materials list is almost identical.
Just wondered what your thoughts were on this?
Chat soon
Sooz


Ok, so using different beads (well, that's not surprising is it?  A bead shop is not going to go out and buy beads from another bead shop when they are just a regular bead are they? and adding a charm makes it her design?

Of course there is always the argument of 'being similar', I've done this myself, made something and found it has already been done, this could have well been this case in this example.... if they had not admitted where they got the 'idea' from in the first place.  Afterall this might not even be my design, it may have been done loads before, but I have not seen it anywhere else and if I had I certainly wouldn't claim to have designed it.  (Design is probably the wrong word anyway, maybe we should substitute it with 'techniqued')

And actually my beads were glass, they remade it on the Bead TV website with different beads.  Can you claim a design as your own and credit yourself as being the designer if you simply change the beads?

Hi,
Thanks for your reply,
So, that would seem it is my bracelet pattern as it was featured on the Bead TV website, along with others I have done.
Sooz


No reply. A whole month later I email again.

I see my bracelet design is still being featured on your website.
I am sick of people contacting me to tell me about it, so can you please either remove it or credit me with designing it? 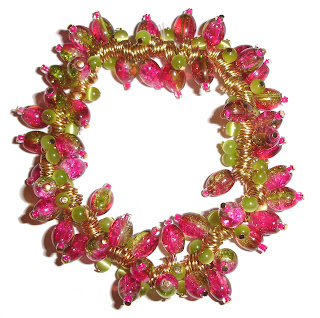 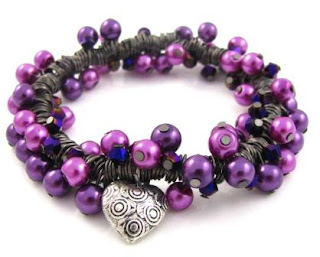 Similar? Ok, they take a much better photograph than me, but aside from the shape of the bead and the added charm (Oh why didn't I think of that!! **sarcasm**)  they look pretty alike right?  And the fact that they even admit where they found the design from, how can they even contemplate putting themselves as the designer?

Anyway, do you want the tutorial now?  MY tutorial for MY design, given to YOU, make it, share it, even teach it if you like, put it as a free tutorial on your website, just don't claim that you designed it  ;)