It was, and what resulted was me watching them eat chips with gravy (It's a Northern thing) while my broccoli was steaming.

It should be law that whenever someone is on a diet, the whole family has to diet, NOT eat chips & gravy. What would have been worse if it had have been chips, cheese & gravy (that's a Northern thing too - but don't knock it ill you've tried it). I love that, melty cheese dripping with rich gravy (veggie gravy of course)


Do you know whats even worse than worse? THEY LEFT SOME!!

Forgive the capital letters, it's my belly talking, my mind is being very angelic and healthy, my belly doesn't agree, it's shouting at me - chips, cheese, gravy, scabby donkey..... Oh, hang on, I'm a vegetarian, just the scabs then, sprinkled on top of the cheese.

I've felt it today, those shakes just make me hungry, my stomach has been touching my spine all day. My Mallory Belt got so loose it just fell right off when I was walking (you know that's a lie, right?) 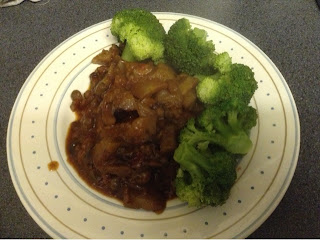 This is a side plate, a largish side plate mind, so although it looks like a decent portion, it's not. At least not for me, but I have to say it tasted delicious. I've certainly no complaints about the flavours of these foods, I just think I need to pad them out with some more veggies.

I have a shake left today, I will be taking care not to mix it with coffee.

ps: The Amazon links are affiliated  if you click and buy I might get a few pennies.  Just so you know :)
Posted by Unknown at 00:46