The Hubster is working away rom home and has spent the last few weeks in Bodmin, Cornwall. As it is a very long way from home he has been staying weekends, so I've not seen him for a while

But today I travelled down to spend some time with him.

A 6.00am alarm clock had me contemplating whether I should roll over in my nice cosy bed or get up and shake my tail feather. Shona was giving me a lift to the station & she was hollering outside my bedroom door, so that made that decision. Good job she did really or I might just have turned over ;)

The first train, Carlisle to Birmingham (2.51 hours) was uneventful in the fact that I slept most of the way.  I woke up aware of my mouth being wide open, to find I'd dribbled down one side of my chin! Nice.

Wow, Birmingham New Street Station  is BIG.  I had to ask for help twice to find my platform.

I spent 30p for a wee. 30p? Since when did it cost 30p to have a piddle? I was doing my "wee dance" while rooting deep in my bag for certain coins that went in the turntables. You know the 'wee dance' don't you? The one where you press your knees together and sway your hips (I think it's supposed to take your mind of your bladder, but invariably fails).

I decided to find food for lunch before getting on the train, but just as I was choosing a sandwich I had the most horrid thought that what goes in must come out! And I certainly didn't want to be doing THAT on the train!

For the same reason I didn't get a brew, just sipped at some lukewarm water.

I managed, eventually, to find the next train, Birmingham to Plymouth (3.21 hours) and got my seat, which was luckily reserved as it was packed.

I had taken with me some crochet - bad idea, the train was so full that I couldn't even manipulate the bag out from under my seat. What a waste, 7 ish hours of sitting down & no crochet.

I had also taken two books, 'Mindless Eating' and a book about Fred & Rose West. Now, why didn't I think about this more carefully? I'm either gonna be seen as a weirdo, or someone's gonna snap a photo of a fat bird reading a 'diet book' & it'll end up getting posted on some "spotted" page.

I leave the books, with the crochet, in the bag.

Instead I pay £2.50 for 2 hours of Internet, I managed to load my Facebook page once and that was it.

All that left me to do was watch the young man opposite me trying to excavate his nasal passages. My goodness, he dug deep, at one stage I thought he might be massaging his brain!

He must have dislodged something though as for the rest of the journey he did those really big, loud, snotty sniffs,  and I swear I could actually hear something moving about in there.

At one point I moved my gaze from my side of the train & looked out the window opposite. Oh my goodness, was that the sea I see? It was, and it came as a bit of a shock, so much so that I got overly excited and asked the sniffer "is that the sea?" He looked at me with a mixture of sympathy and wariness and confirmed that the huge mass of water with boats on it was indeed the sea.

Catching the final train  from Plymouth to Bodmin (39 mins) was easy peasy, straight out of one train door, a skip & a jump across the platform & directly into the waiting train there.

What a shuggly juddery old girl that one was.  The views through Cornwall were beautiful, but try as I might I just couldn't stay awake. I fell asleep, and dribbled.

I did manage to catch this photo of the Taymar bridge as we went over the one beside it though, isn't it magnificent? It doesn't look so big in the photo, but trust me, it was huge! 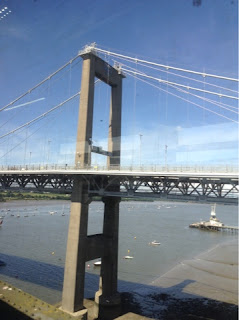 I arrived at Bodmin at 2.30pm, the Hubster picked me up from the station & promptly dropped me off in Bodmin town centre where I hung about for 2 hours for him to finish work. I visited a few charity shops (it's the law) ate a wonderful Brie, Grape & Redcurrant Jelly panini at The Green Frog cafe in Bodmin withTWO pots of tea! 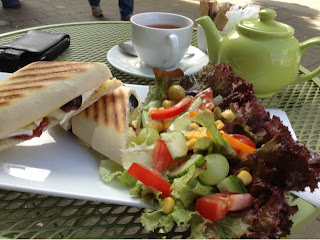 I've never sat anywhere to eat on my own before, it really was a bit strange, but I was blooming hungry.

I'm now happily in the hotel (which is rather posh, I'll share soon), showered, happy & ready to go out to dinner :)