Wow, what a steep place, let me tell you the burn in my calf muscles went on for ages!

We parked at the top of the village between Port Issac and Port Gaverne.  Can you see the arrow?  That's the car park.

The same pic with another arrow, this arrow is pointing at the house they use as the Dr's surgery in the TV show. 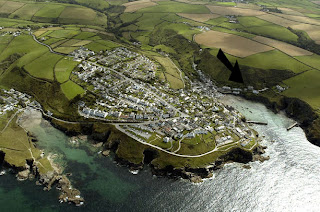 We headed towards Port Issac which is the little port on the right of the photo,  it was quite nice going downhill, quite relaxing, except for that fact that my brain was screaming "Gotta get back up!!" 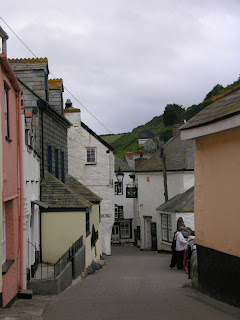 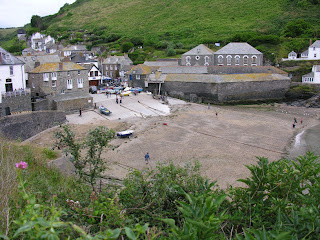 It was so picturesque, like a pretty little postcard, and there was loads of people about so it is obviously a little touristy place.
You could see the Doc's cottage on the hill opposite, can you see it?  It's the little brown one nestled under the rather large brown one.  It actually doesn't look that steep from this angle, but trust me, it was a ligament stretcher. 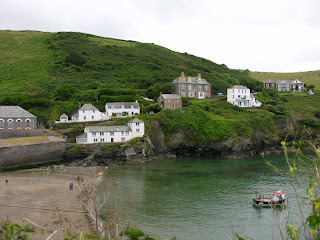 We walked right down to the 'harbour'. 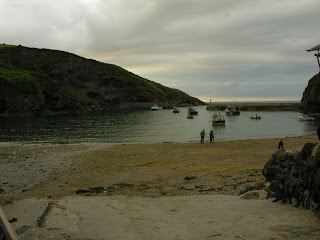 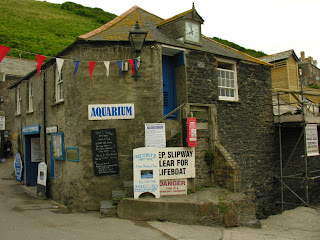 And we spotted the little shop that is used for the chemist in the show.  Now, I must explain, when I see "we" I mean "me", Hubster really couldn't be less interested, he doesn't watch much TV at all and although he does know who Martin Clunes is that's about as far as his interest goes, but I was being all excited enough for two of us. 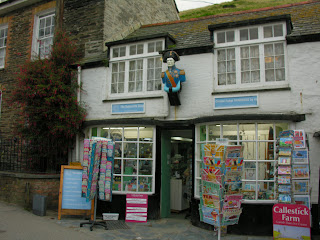 Plus I bought him some naughty fudge at the "chemist" which made the miserable sod smile a bit  :) 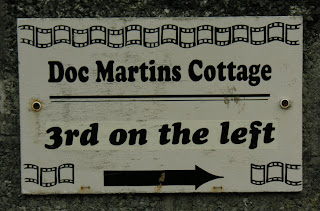 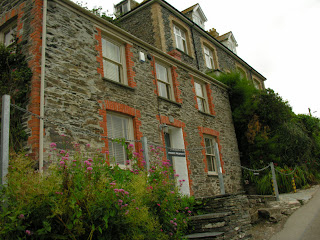 Aww, look at all those railings and privacy markers.  The only house in the area to sport them.  That's the price for letting your little home become a TV backdrop I suppose.
This is the photo I took with my back to the cottage, all the time thinking about how I had to get back up that other side. 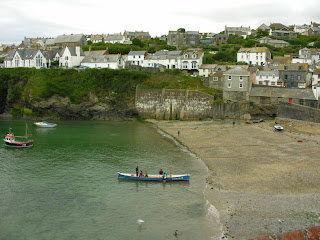 Anyway, back down we go in search for dinner.  (That's Hubster there photographing a seagull) 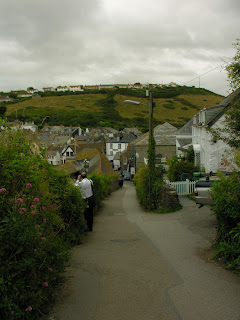 We were planning on a nice pub/restaurant with a table overlooking the sea, but the cheapest meal price we found was £15 (it went up from there) and even though I am not one to gripe about pennies usually, I was NOT paying £15 each for a bar meal.  So chippy chips it was then  :) 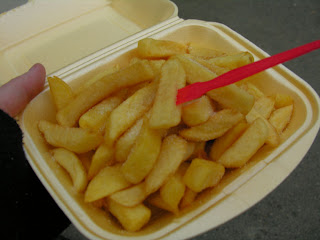 And lip-smackingly gorgeous they were too, although the first half I could barely taste as we were walking uphill back to the car and I was concentrating on panting.  Still, it took my mind of the hill.

Why do chips taste so good outside ?  So much better than if you eat them inside.