This week this blog is turning into something of a Travelogue, I hope you don't mind too much, I will be back to crafting very soon.  If you do mind then look away for a few more days  :)

Today we decided to take a trip to Lands End, just so we could have our photos taken with the famous signpost.

Just as we were getting there about 1/4 mile away, there was a pub serving food, it was 12.00noon and we were getting peckish and the pub boasted that it was "The First & Last Inn In England" so we didn't think there would be much past it.  However, we decided to go and have a look at the signpost and come back for lunch..... only when we got to Lands End we got a bit of a shock as it is a bit of a little touristy park kind of thing. 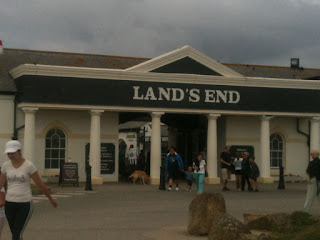 First of all it was £5.00 to park, but you could go back and visit again within the week, and they do use the money to look after the land that you park on, so it's not just going into some rich knobs pocket.

Then you get to the Lands End building, on entering it is not too dissimilar to a theme park entrance, only on a much smaller scale. 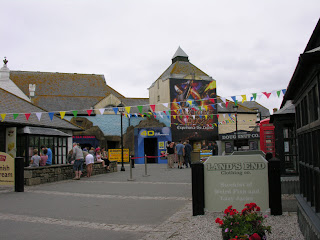 Entry was free, or you could pay for some small attractions, £10 per adult for the lot which was an.....

Air Sea Rescue motion theatre experience.  Yeah, well this was interesting, you walk down a dark smelly (supposidly atmospheric) corridor and watch a bit of a video about a bloke getting stuck out at sea with stomach pains.  It must have been filmed in the 80's judging by the clothing (oh, and the colour of the Sea King Helicopter, says Hubster!).  Once we had stood in the corridor and watched the trailer we went into a room which was to resemble the inside of a lifeboat.  I absolutely hate motion rides so Hubster thought it was incredibly funny to laugh at me as I grimaced and wriggled about like a 6yr old, but once it got going it was ok, it just bumped about a bit.

Arthur's Quest. We did wonder why the bloke stamping the tickets had a little giggle when we went in, until we realised it was for children!  We were the only adults in there without a child, so we got back out quick. Kids would love it though.

Greeb Farm.  A cute little farmstead with a few animals, mostly chickens, but the odd bunny and a couple of small ponies.

We did all that, but first lunch! 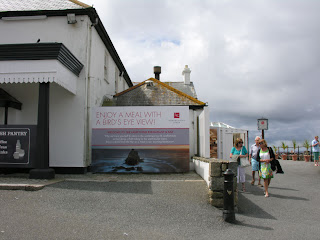 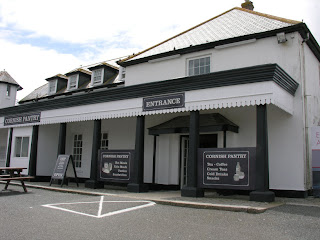 And have to say, not at all what we expected.  Restaurant?  Canteen more like.  With school dinner type food, kept warm under hot plates, and serve yourself tea.

We had a pasty each and a drink which knocked us back nearly £15.

Of course mine was a veggie pasty, vegetables and cheese - I think they forgot the cheese.  Having said that, it was quite nice and I would have one again.  Hubster had a Cornish pasty, which surprised me somewhat as he is not at all adventurous and would normally never eat something like that.  We had had a chat the evening before about how I think he should try new things and this was him trying. 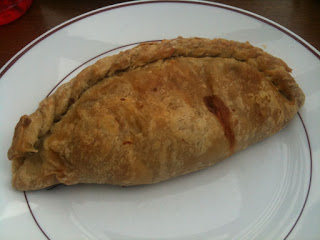 His face while he was eating it was a picture, you could so tell he wasn't enjoying it at all.  The worst thing was that the "beautiful sea view conservatory" was boiling hot, full of misbehaving kids throwing food about and one child that screamed so loudly I thought my ear drums might pop!

We ate up and got outa there.

Can you guess what happened next?

Well, we walked around the back of the 'restaurant' to find a.......RESTAURANT, yep, we had gone in the wrong one!  We looked at the menu on the door filled with the most gorgeous sounding food, white with annoyance Hubster waved at the menu and said "Bloody hell, would you look at that, I could have been eating nice food, instead I had to have a DOG FOOD PIE!"

Sorry to anyone who loves Cornish pasties, but I did laugh  :)

We wandered over to have a photo with the sign post only to find out it was roped off and there was a charge!  Yep, a charge to stand by the post to have your photo taken.  So we just grabbed on without either of us in it. 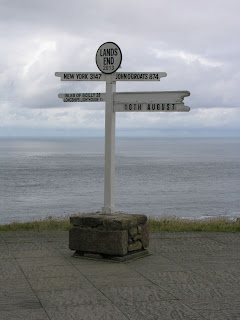 Then took my shoes off and stood at the most South Westerly point of the United Kingdom. 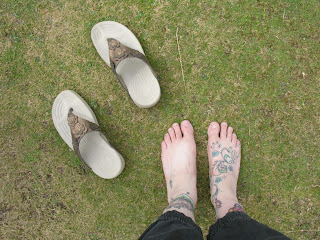 We finished the day off with a Cornish ice-cream, you just gotta don't ya? 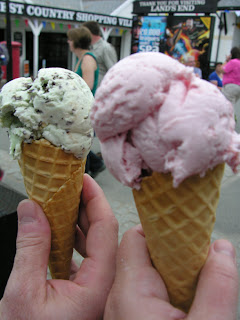 (I must point out that the ice-creams were both the same size, I certainly have not go a two-scooper leaving him with a single, it's the angle of photography  :)  )